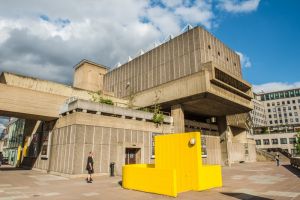 The Hayward Gallery is one of several major art venues on the South Bank, including the Royal Festival Hall, British Film Institute, Royal National Theatre, and Queen Elizabeth Hall. The Southbank Centre was built for the Festival of Britain in 1951 as a centrepiece of the arts. The gallery was built in 1968 and is named for Sir Isaac Hayward of the London County Council.

It is rare to find an art gallery where the building is as much a piece of art as the work it contains. The Hayward was a controversial building, in Brutalist style, with huge masses of concrete, like giant building blocks. Once reviled, it is now considered an exceptional example of a briefly popular style of urban architecture.

There are 5 gallery spaces, on 2 levels, with 3 outdoor sculpture courts, which have been described as huge concrete trays.

The gallery itself does not have a permanent collection. Instead, it is used as an exhibition venue for 3-4 exhibitions annually. Though most of the exhibitions are based on contemporary art, the gallery embraces all time periods and art from around the world. Past exhibitions have included Da Vinci and French Impressionism.

More recent exhibitions have focussed on modern art, which is chosen to compliment the building's imposing architecture. The Hayward has a history of encouraging innovative artists and adventurous artistic concepts, so shows can be controversial.

The Hayward does not receive state funding and thus it charges an admission fee. It also supports artists in residence and has a touring exhibition programme throughout the UK.

More self catering near Hayward Gallery >>