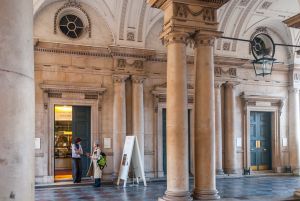 Courtauld Gallery
The Courtauld is one of the best - and most prestigious - small art museums in the world. It is home to the collections of the Courtauld Institute of Art, a college of the University of London. The Gallery specialises in paintings by Impressionist artists.

The Institute and the art gallery were established in 1932 by a wealthy industrialist named Samuel Courtauld, who donated works of Impressionist and Post-Impressionist art from his private collections, followed by a further donation a few years later and a final bequest on his death in 1948.

Perhaps the most famous of Courtauld's gifts to the gallery was Manet's 'A Bar at the Folies-Bergere', but he also included works by such Impressionist masters as Edgar Degas, Claude Monet, Vincent Van Gogh, Paul Gaugin, Henri Toulouse-Lautrec, and many other famous artists.

One of the Institutes co-founders was Lord Lee of Fareham, who donated a collection of Old Master paintings, including a work by Rubens. Even more was to come from another co-founder, Sir Robert Witt, who gave over 20,000 prints and 3000 drawings, plus works by British artists and more Old Master paintings. 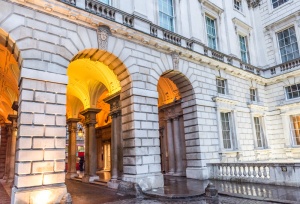 Later donations of artwork included works by the Bloomsbury Group, Italian Renaissance art, and English watercolours by Turner, Gainsborough, and Constable. In addition to the paintings and drawings that form the core of the collections, the gallery was also gifted collections of medieval ivory and enamel carvings, majolica ware, metalwork, glass and wooden carved objects, and illuminated manuscripts. Among the most important sculptures is a 15th-century marble relief carving by Mino da Fiesole.

The Gallery occupies the north block of Somerset House, built in 1775 by Sir William Chambers. The Strand block was built specifically to house the 'learned societies', that is The Royal Society, The Royal Academy, and The Society of Antiquaries. The Courtauld Gallery moved into Somerset House in 1989.

The Gallery is only part of the Courtauld Institute, which specialises in the study of art history. The Gallery's collections now hold over 26,000 drawings and prins, plus 530 paintings. Those numbers are impressive, but what is really impressive is the quality of the artwork on display, not simply the quantity.

The Gallery is located in historic Somerset House on Strand, easily accessed from Temple underground station. It is open daily and there is an entrance charge.

The Courtauld Gallery is temporarily closed for a major restoration. It will reopen in early 2021. We will update this page with further details as they become available.

Note: You can get Free Entry to Courtauld Gallery with the London Pass

More self catering near Courtauld Gallery >>