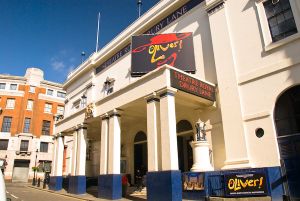 Theatre Royal Drury Lane
Perhaps the most historic of London's theatres, the Theatre Royal dates back to the early 17th century. After the restoration of the monarchy in 1670 a new theatre was built on this site, to a design by Sir Christopher Wren.

It seems that as early as Shakespeare's day there was a theatre outside the old city walls of London on the eastern side of Drury Lane, dubbed 'The Cockpit'. Its site is remembered in the name of Pitt Lane, formerly Cockpit Alley. It seems very likely that early theatres offered more rowdy forms of entertainment, such as cockfights. Indeed, the original name for a theatre 'pit' was 'cock-pit'.

Around the time of the Restoration of the Monarchy in 1660 Thomas Kelligrew, Page of Honour to Charles II, leased a plot of land from the Earl of Bedford between the parishes of St Paul's, Covent Garden and St Martin-in-the-Fields. Kelligrew spent the enormous sum of £1500 to build a theatre, under a royal charter from his master Charles II. A copy of the royal charter is proudly displayed inside the present theatre (the original is in the nearby Theatre Museum).

The first play performed at the new playhouse was The Humorous Lieutenant, a comedy by Beaumont and Fletcher, which Pepys called 'a silly play', though he seems delighted to have been invited to meet one of the actresses after the performance. In 1665 Nell Gwynn made her debut on stage at the new theatre, and it was here that Charles II first set eyes on his mistress-to-be. 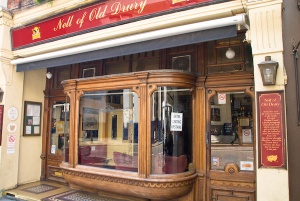 The Nell of Old Drury pub

The first theatre was burned to the ground in 1672, so Kelligrew built a second, more elaborate theatre on the same site. That theatre opened in 1674, with a performance attended by Charles II.

Actors were known as 'His Majesty's Servants', and were entitled to wear the royal livery of scarlet. Perhaps the most famous member of 'His Majesty's Servants' was David Garrick, of whom Alexander Pope declared, 'That young man never had his equal as an actor, and he will never have a rival.'. Garrick served as manager from 1747-1776, and was succeeded by Richard Sheridan, best known as the author of The School for Scandal, which was first performed here in 1777.

Sheridan demolished the 17th-century building in 1791 to make way for a new theatre designed by Henry Holland. Holland's theatre featured the first known safety curtain, but it still burned down in 1809, so a fourth theatre was built, this time designed by Benjamin Watts. It is Watts's building that we can see today. With a capacity of 2,205 it is still one of the largest theatres in London's West End. It was financed by a Committee of Renters under the leadership of Samuel Whitbread, the brewer, and the first Chairman of the Board was the poet, Lord Byron.

During WWII the theatre was hit by a gas bomb which miraculously failed to explode, though part of the theatre burned.

NB.
Though the theatre name suggests it is located on Drury Lane, it only backs onto that street; the front entrance is actually on Catherine Street.

Across Catherine Street from the theatre entrance is the Nell of Old Drury pub. An underground tunnel links the pub and the theatre, and rumour has it that the tunnel was used by Charles II to secretly visit his mistress, Nell Gwynn.