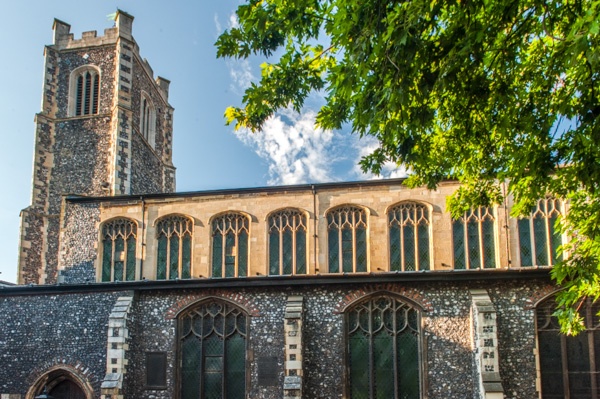 St John Maddermarket, Norwich
St John's church dates to the latter half of the 15th century and is a very nice example of Perpendicular style. It's a rather odd building, almost square in plan. This peculiar layout is reputed to be the result of a hasty decision to widen a nearby road due to a planned visit to Norwich by Elizabeth I.

The space to widen the road was found by chopping off the chancel of St John's, making access to the nearby ducal palace easier! It seems likely that this story is a mere fantasy, but it sounds good!

The name Maddermarket suggests that there was a nearby market selling madder roots, which were used for dyeing cloth. However, there is no historical record of such a market.

Though the bulk of the church is Perpendicular, the lovely east window is a beautiful example of Decorated Gothic. The window can be dated with reasonable certainty to 1320 and must have been one of the few bits of an early church on the site to survive the 15th-century rebuilding.

In another unusual touch, the south porch is incorporated into the aisle rather than projecting out from it. This probably was a space-saving measure, as the site occupied by St John's is hemmed in by surrounding buildings. There is an unusual public walkway or ambulatory passage directly under the tower.

The interior is, well, to put it kindly, rather unusual. The oddly jumbled mix of furnishings was down to the eccentric tastes of a 19th-century vicar named William Busby. Busby installed a marvellous Georgian baldachin, or canopy, over the altar, and a very European style reredos in the Lady Chapel. The canopy dates to 1739 and was very probably made for St Miles church at Coslany. It was installed in St John's in 1917. 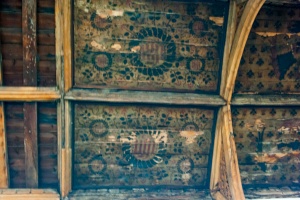 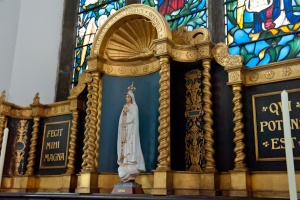 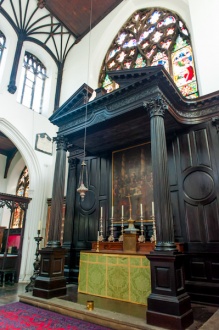 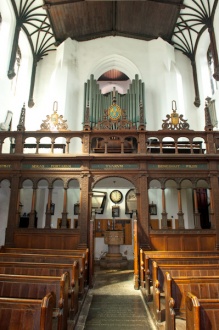 The west end and gallery 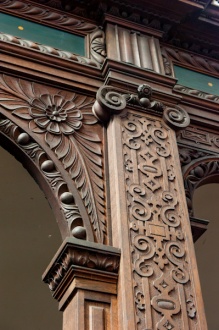 An explosion inside the church in 1876 destroyed most of the medieval stained glass, though some fragments still remain in the centre window of the north aisle. However, most of the glass is Victorian or 20th century.

Will Kemp was an Elizabethan actor and friend of William Shakespeare. In 1600 he undertook to do a Morris dance from London to Norwich; as PR stunts go it was an unqualified success. It took Kemp 25 days to make the journey; 9 days of dancing interspersed with 16 rest days. He was accompanied along the way by an overseer, acting as a referee.

Kemp paused just outside Norwich for three days to allow curious onlookers to gather. When he arrived in Norwich on 8 March the crowds were so great that he was forced to jump over the churchyard wall to escape the throng. A plaque marks the spot where Kemp made his escape.

In an amusing footnote, the referee could not actually verify Kemp's finish of the route, because the crowds had been so thick. So he made Kemp repeat the final day's dance a few days later. After this second finish to the Nine Day's Wonder, Kemp gave his dancing shoes to the city of Norwich, and they were fixed on the wall of the Guildhall. 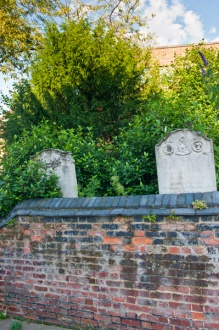 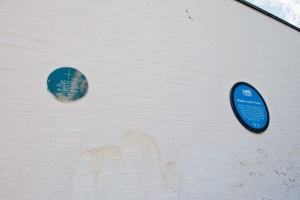 There are so many interesting memorials it is hard to know where to start! There are a huge number of wall monuments, spanning four centuries from the 16th through the 19th century. There are also a number of earlier medieval brasses, which have been collected and mounted on the west walls. This is probably the largest collection of brasses in Norwich. Among the brasses is a pair to William Pepyr and his wife Joan (d. 1476). 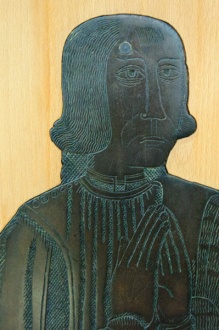 Even more impressive is a large brass to John and Lettys Terry, dated 1524. John Terry was Mayor of Norwich in 1523. The rather elaborate coat of arms includes the Mercers of London, of which Terry was not a member, so he had no right to include this in his own arms.

Another fascinating brass is that of John Tuddenham (d. 1450). The inscription on the brass is a complete verse in English, very unusual at a time when Latin was used almost exclusively on memorials. 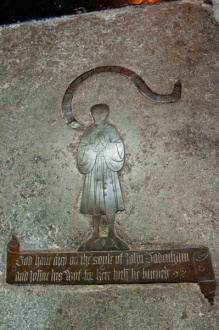 One wall tablet in neoclassical style is to Lady Margaret Howard (1540-1563/4), known as 'The Virtuous Lady Margaret'. The was married to Thomas Howard, 4th Duke of Norfolk, one of the richest peers in 16th century England. Though Lady Margaret died in 1563 and was buried in the chancel, the memorial was not erected until 1791. 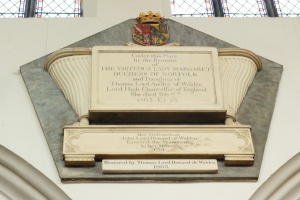 This painted wall monument is fairly typical of the late Elizabethan period, showing Layer and his Barbara facing each other across a prayer desk. The couples' daughters are arrayed behind their mother, the sons behind their father. The central effigies are surrounded by allegorical figures representing labour, vanity, glory, and peace.

It is these figures that raise the Layer monument above the ordinary; the depictions are amusing and a lovely reflection of the period. Christopher Layer was a grocer, who rose to become Sheriff in 1569, mayor in 1581 and 1589, and a Burgess in Parliament twice. 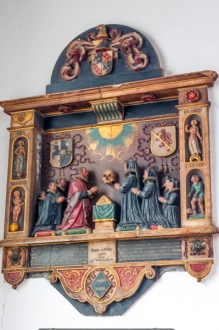 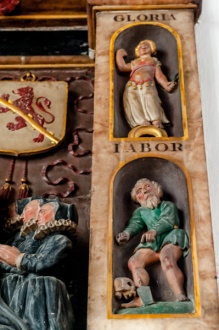 Allegorical figures of
Glory and Labour

Sotherton was a wealthy grocer, magistrate, Sheriff (1530) and mayor (1539). He owned considerable property, including Stranger's Hall, in Maddermarket parish, where you can see the restored 'Sotherton Room', with his merchant's mark on a beam by the fireplace. The monument in St John's shows Sotherton and his wife Anne, kneeling beneath their family coats of arms, though there is some doubt that he actually had any right to bear arms. 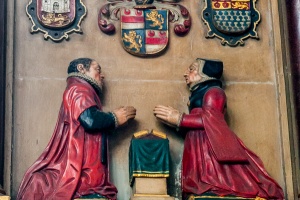 Compare this monument to that of Sotherton's grandson, Thomas (1555-1608), who was also a grocer, and served as Sheriff in 1592 and mayor in 1596. Thomas also lived in Stranger's Hall. The monument has the Sotherton coat of arms over Thomas's head, but no arms above his wife Frances. The obvious inference is that her family background could not match that of her husband's. Look for the three children carrying skulls, an indication that they predeceased their parents. 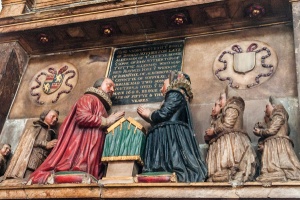 In the north aisle is a monument to Walter Monck, founder of the Maddermarket Theatre in 1921.

St John's Maddermarket is no longer used for regular worship and is in the care of the Churches Conservation Trust. Opening times are very limited; at the time of this writing, the church is only open for 2 1/2 hours one day a week. And that's a real shame because the interior furnishings are simply wonderful. I feel very fortunate that we timed our trip to Norwich to coincide with an opening time because this church was one of the highlights of our visit. Honestly, if you get a chance to visit, grab it! 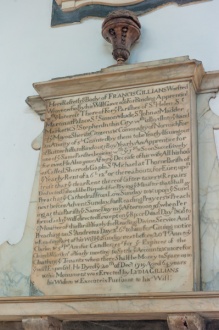 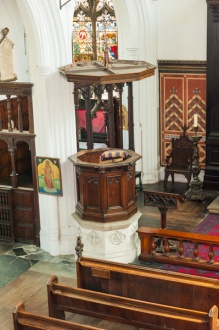 The pulpit and
sounding board 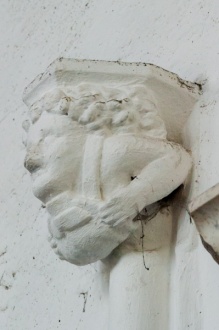 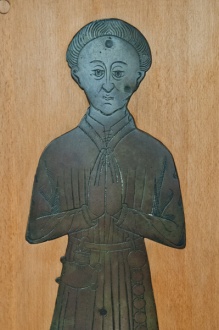 Another of the
medieval brasses 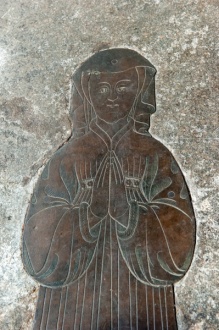 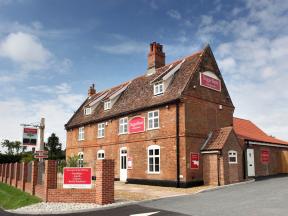 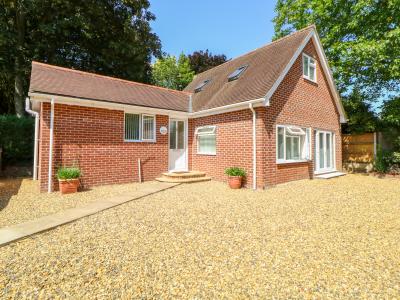