HERITAGE HIGHLIGHTS:   Built with timbers from a Spanish Armada galleon? 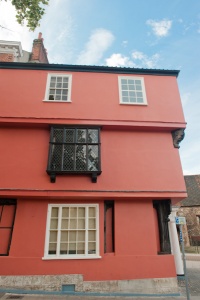 At the corner of Princes Street and St Andrews Street, about 5 minutes walk from the cathedral, stands a Norwich landmark, a simple 16th-century building, timber-framed, with a plastered exterior. Aside from the Elizabethan architecture, which is an excellent example of late 16th-century building, what makes Armada House so popular is the story behind its construction.

According to local tradition, the house was built using timbers washed ashore along the Norfolk coast after the defeat of the Spanish Armada in 1588. The story is emphasised by the date 1589 carved on the exterior, and a plaster relief carving of a 16th-century ship under sail on the Princes Street side of the building.

Is the story true? Well, the answer is that we don't know, but it 'could' be true, and the date of construction certainly fits. 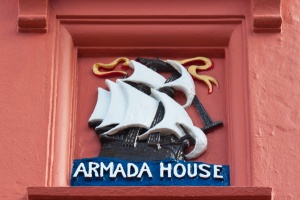 Though most people call it 'Armada House', and that name is carved in relief on the south gable, but the real name of 1 Princes Street is Garsett House, named for Robert Garsett (or Garstead) a local tailor who was granted the freedom of the city in 1558 and elected Sheriff in 1599.

The house was originally twice its current size, but half the building had to be pulled down in 1898 to make way for a link road from Redwell Street so that trams could manage the tight corner around Princes Street.

Armada House has a rendered exterior, painted pink when we visited, under a hipped roof. It stands three storeys high, with the upper storeys jettied out on decorated brackets at each corner. There is a recess on the Princes Street corner where a blackened oak timber stands, curving out to support the upper floors. There is a Georgian doorway supported on classical pillars on the Princes Street facade. 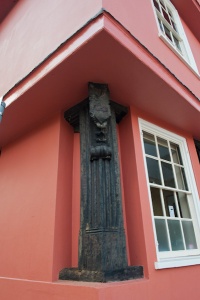 There was a house on this site at least early as the 14th century, with the first known owner recorded as John de Norweigh (John of Norway). By 1570 the records show the owner as Robert Garsett, or Gartside, presumably the same Robert Garsett who gave his name to the house.

Garsett was an alderman at the time of his death in 1611, and there is a mural memorial inside St Andrew's church to Garsett and his wife, with a marble bust of Garsett and smaller effigies of their two children, son Robert and daughter Elizabeth.

The building was used as a school in 1864, then it was owned by Alfred Kent, a solicitor, and his son Ernest, also a solicitor. Ernest Kent bequeathed the house to the Norfolk and Norwich Archaeological Society, on his death, and they used the first floor as their main offices.

More self catering near Armada House