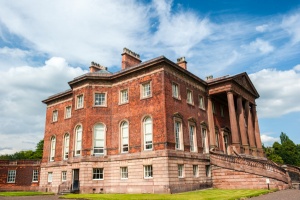 The Nether Tabley estate goes back to at least the 13th century. In the 1270s Margaret Dutton married Nicholas de Leycester, and part of her dowry was a manor at Nether Tabley. Around 1380 the couple's great-grandson, John, began to build a manor house on an island in the lake.

This manor became known as the Old Hall. Perhaps the most famous Leicester to live at the Old Hall was Sir Peter, an avid antiquarian and Royalist soldier, who was made a Baronet at the Restoration of the Monarchy in 1660.

In 1742 the direct male line of Leicesters at Tabley ended with the death of Sir Francis, the 3rd Baronet. The estate passed to his grandson, Peter Byrne, who was forced to apply for an act of Parliament to change his name to Peter Byrne Leicester by the terms of his grandfathers will.

Sir Peter was only 10 when he inherited, but he must have realised that the Old Hall was no longer suitable as a fashionable residence. When he came of age Leicester called on John Carr (Carr of York) to build a new mansion on a sloping rise of ground overlooking the lake. The Old Hall was maintained, but never used as a residence again.

The new Tabley House is a Palladian masterpiece; a beautifully symmetrical Italianate building of red brick and stone, looking out over a broad lake. From the sweeping steps that rise to the first-floor entrance you can see the tower of medieval Tabley Old Hall still standing on its distant island, though the rest of the structure was pulled down. 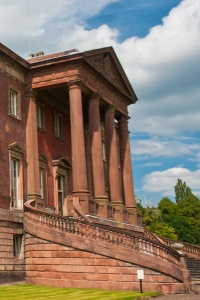 The Palladian house looks like it would be at home in an Italian setting; indeed the design by John Carr consists of an Italian 'piano nobile' central block, joined by wide, sweeping wings to a pair of symmetrical blocks. What is truly impressive is how little the south facade, facing the lake, has changed since it was finished in 1767. It is an almost perfectly complete Palladian villa.

The interiors have been considerably altered over the centuries, but many original features remain, including wonderful plasterwork in the Portico by Thomas Oliver, who spent five years at Tabley before his work was complete.

Carr's patron, Sir Peter Leicester, was a noted patron of the arts, notably purchasing works by such artists as Gainsborough before he became famous. Sir Peter's collection was added to by subsequent generations of Leicester, and it is now the art collection that is the main attraction for visitors at Tabley. One of the most striking paintings is Friar Puck, by Henry Fuseli, bought for 100 guineas by the 5th Baronet in 1819. 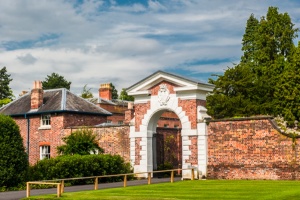 Unfortunately, the Leicester family line died out in 1975 and the house ended up being sold for use as a long-term residential care facility. Much of the ground and upper floors, and the two service wings, are now flats. However, the main floor of the house has been carefully restored and serves as a showcase for the wonderful collection of fine art amassed by generations of Leicesters.

[Unfortunately, we were not allowed to take indoor photographs so we can't share images of the art collections or the Palladian interiors, but they really are quite something to see in person]

There is more to Tabley than just the paintings; for example, the Marble Hall, created in 1843 and housing five large relief carvings, including a very impressive frieze of The Nine Muses.

One highlight is the family chapel, rather incongruously reached through the cafe. Though the building that houses the chapel was built in 1920s, after the original original 17th century chapel beside the Old Hall suddenly collapsed.

Much of the 17th century fittings, including 20 of the roof beams, were rescued and moved to the new site beside Tabley House. Among the 17th-century furnishings are the pulpit and sounding board, and a wonderful chaplain's desk with gilded cherubs for decoration.

On the north wall is a window design by Edward Burne-Jones in memory of the 3rd Lord de Tabley. The quality of the woodwork is simply wonderful, with richly carved decoration and gilded details.

We came for the architecture of Tabley - I'm a big fan of the Palladian style - but its the art that I remember most vividly. The collection of painting is exceptional, and to see them displayed in such a beautiful 18th century setting is a wonderful experience.

Note that Tabley is first and foremost a care facility, but as of this writing, the ground floor rooms and artwork are regularly open to the public during advertised times. 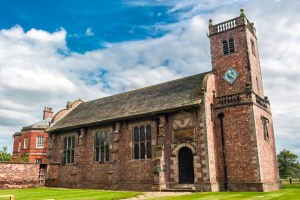 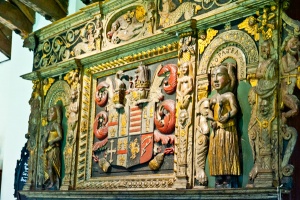 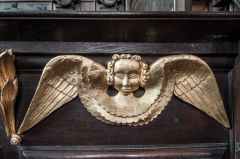 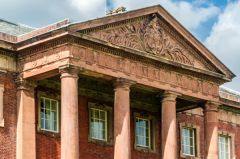 More self catering near Tabley House

Self Catering near Knutsford