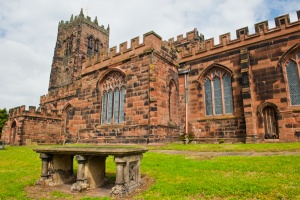 The Domesday Book mentions a priest in Great Budworth, so it seems reasonable to assume that there was a church as well, but if so, no trace of the building now remains. There was certainly a church by 1130, when the Augustinian canons of Norton Priory in Runcorn were granted it by the Constable of Cheshire. The canons built the church we see today.

The oldest part of the current church is the Lady Chapel, which dates to the 14th century. Most of the rest of the building is 15th and 16th century, including the tower, built between 1500-1520 by Thomas Hunter. The tower bears the arms of Runcorn priory, as well as the local Dutton and Warburton families.

The Reformation put an end to the canon's involvement at Great Budworth, and the richly decorated medieval interior was whitewashed in a wave of radical Protestant sentiment.

The last major transformation of St Mary and All Saints came in the 19th century, when Rowland Warburton of Arley Hall restored the church and returned it to something approaching its original medieval state. 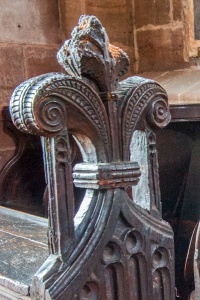 The result is a large Perpendicular church of red sandstone, with a north transept in Decorated Gothic. The transept is used as a Lady Chapel, while the shorter south transept opposite is now the Warburton Chapel.

One of the most appealing features of the church is the nave arcade, where you can see amusing faces carved into the pillar capitals. And if look up you will see an extremely attractive 16th-century roof, supported on oak beams which rest on stone corbels carved in peculiar and grotesque faces.

There is also a 15th-century octagonal font with a beautifully carved base. This was buried under the church floor following the Civil War. and only discovered again in 1868 during restoration on the nave.

This beautifully furnished and decorated transept houses several 13th-century oak stalls, among the oldest in Cheshire. These bear their original misericords, though unlike most medieval seats these have not been embellished with carvings but left plain. 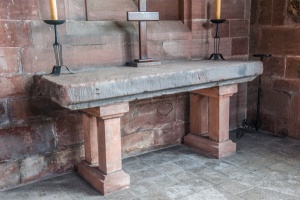 There are a pair of oak chests, one medieval and another 17th century. The very worn alabaster effigy on the floor is to Sir John Warburton (d. 1575). Sir John is shown in dress armour (that is, armour made for show, not for real combat), wearing a lace ruff and a plumed helmet. Also in the chapel is a heavy stone altar, originally used in the chancel. This was removed at the Reformation and used as a flooring slab until its purpose was rediscovered i the 19th century.

The oldest part of the church, built in the 14th century. Under the chapel floor are burial vaults for the lords of Tabley House and Marbury Hall. The screen separating the chapel from the nave was designed by Anthony Salvin, one of the leading 19th century church architects.

In the chapel is a memorial to Sir Peter Leicester (or Leycester), 1614-1678, a leading 17th-century historian and antiquarian. In the medieval period, the chapel housed a statue of the Virgin Mary. Sixteenth-century records reveal that it was destroyed 'by command of Queen Elizabeth'.

The large east window has glass by CE Kempe (look for the Kempe wheatsheaf symbol).

Outside in the churchyard is a small early 17th century building that was used as a schoolhouse until 1857.

Do take a few minutes to enjoy the area around the churchyard, which is surrounded by pretty period cottages, with a cobbled lane running past their doors. Its an extremely attractive setting for a beautiful church. 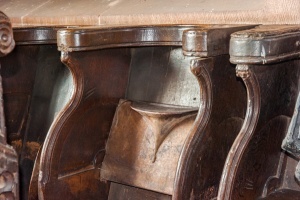 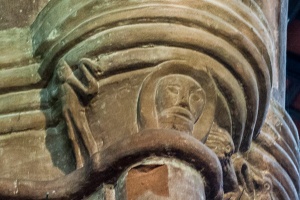 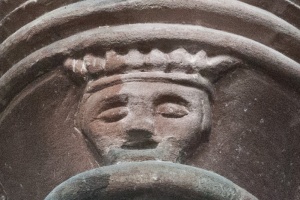 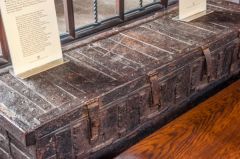 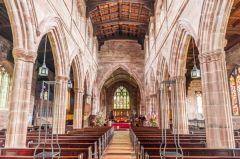 More self catering near Great Budworth