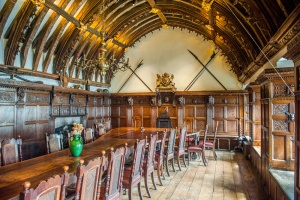 The Victorian exterior of Tucker's Hall suggests a 19th-century church or civic building, but the stone exterior belies the Hall's medieval roots and the beautiful 15th-century interior.

You will have noticed that there's no mention of 'tucker' in the guild name. Tucker is a local term for a fuller, a craftsman who pounded woollen cloth under water to clean the cloth and create a dense texture.

The origin of the term 'ticker' comes from te Middle English word 'tucian', meaning 'to punish'. The tucker was also responsible for hanging the wet cloth on a frame called a tenter, stretched between hooks to prevent shrinkage while the cloth dried. This gives rise to our modern expression 'to be on tenterhooks'.

The first mention of the Guild comes in 1459, when they were engaged in a squabble with the Cordwainers over which guild had precedence in the Mayor's procession on Midsummer Eve. We can safely assume then, that the guild must date to at least the mid-15th century.

The first guild records date from 1483, when a Master and two Wardens were appointed to enforce quality standards among the guild members, regulating wages and working conditions, and overseeing apprenticeship training. 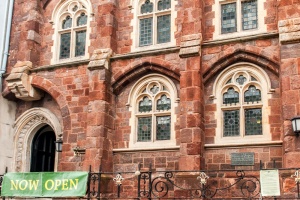 Throughout the medieval period Exeter was a centre of the wool cloth trade, and a busy trading port. The wool trade was regulated by the Guild, with the guild members among the wealthiest and most powerful members of Exeter society.

Tucker's Hall is still home to the Incorporation of Weavers, Fullers & Shearmen. The guild still functions today and hold regular meetings called Courts of Assistants. Membership is no longer limited to people involved in the wool trade, but is open to businessmen and women of Exeter and the surrounding area who own their own business.

The hall's original religious function was a source of trouble after the Reformation. Many religious buildings were seized by the crown during Henry VIII's reign, and used for secular purposes. The hall survived Henry VIII but even though the Guild toned down the religious function of the building Elizabeth I gave the hall to Anthony Kynwelmarsh of Gray's Inn in 1574. Kynwelmarsh in turn sold it to Edward Auleby of Rockbeare. 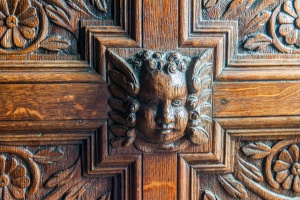 The guild was not about to give up their hall without a fight, and in 1579 bought the building back from Auleby for £20. Things began to look up in 1602 when the guild was granted a royal charter making them relatively independent of the city government. From the late 17th century until 1841 a school for children of cloth-workers was operated on the ground floor.

The hall is one of the most interesting historic buildings in Exeter. Though the exterior was remodelled in the 19th century, the interior features original timber roofs and historic rooms used by the guild for over 500 years.

On the ground floor is a historic interpretation centre where you will learn the story of the guild since its inception, and see how the trades they practiced were carried out. The most interesting feature of the exhibition for us was the recreation of a fulling stock, which lets you see how the woollen cloth was pounded with large hammers to create the finished product.

The most interesting part of the building is on the first floor, where you can visit the guild meeting room in the Upper Chamber. This beautiful historic room has magnificent Jacobean panelling and an original 1471 barrel-vaulted ceiling.

The entire room is decorated with wonderful carvings. The panelling and most of the furniture was installed in 1630. The beautiful stained glass windows have insignia of guilds and names of Guild Wardens. The roof is simply magnificent, with carved ribs and decorative painted bosses.

Tucker's Hall is free to enter but donations are welcome. I have to say that the Hall was an absolute delight to visit. The Upper Chamber is simply stunning, with magnificent panelling and decorative carving. I'd definitely call Tucker's Hall and absolute must-see if you are visiting Exeter. 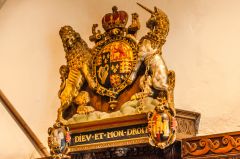 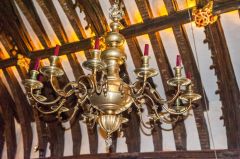 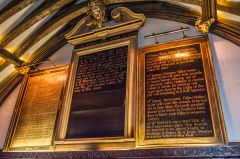 More self catering near Tucker's Hall