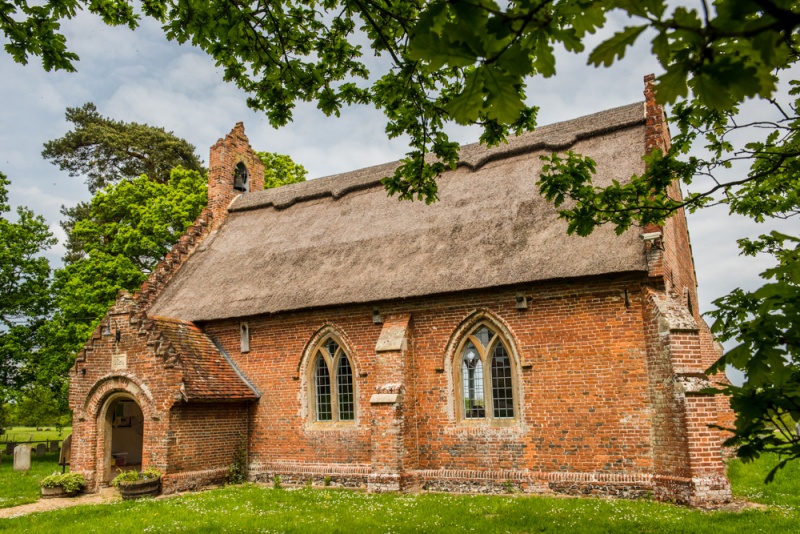 Tucked into a pocket of trees beside the grounds of Hoveton Hall is the pretty thatched church of St Peter. The church was built in 1624, at a time when very few new churches were being built in England. It is over a mile from the parish church of St John's.

Unlike most medieval churches which grew over the course of centuries, St Peter was built in one go, and completed within a year. It is one of the least altered examples of a 17th-century country church in England, and a tiny gem set in an idyllic location.

It may stand on the site of an earlier medieval building, but if so, no trace of that earlier church remains. A will from 1383 reveals that Margaret Ryde of Tunstead left money to repair St Peter's church in Hoveton. That church may have stood close to Hoveton Hall Farm, the home of the Boyes family. There is no indication of why the church was moved and built on a new spot, if indeed it stood near the farm.

The church is built in one unit, with no division between chancel and nave. There is no tower, just a small west bellcote, and the church is entered through a small brick porch topped with a crow-stepped gable. There is one bell, cast in 1624 by William Shidings. The attractive roof is made from local Norfolk Reed thatch.

Apparently the simplicity of St Peter's church did not impress 18th-century visitors. Antiquarian Anthony Norris called it 'A mean modern building of brick'. Norris may have seen a different church exterior than we do today, for there is evidence that the church was once plastered and finished with a coat of white paint.

The original 17th-century seating was in collegiate style, that is, with the benches facing the centre aisle rather than the pulpit. The present pews were installed in 1885 when the church was restored by the diocesan architect, HJ Green.

One of the most interesting historic features is a painted wooden royal coat of arms to Charles II. On the north wall are a pair of memorials to the Aufrere family, while on the opposite wall are three memorials to the Buxton family and another to the Goulder family. The most ornate monument dates to 1750 and commemorates Mary Aufrere.

A word about the families who are represented by these memorials seems in order. The Negus family bought Hall Farm from the Boyes family in the 17th century. The Negus' then built the predecessor of Hoveton Hall, which technically stands in the parish of Neatishead rather than Hoveton.

The first Negus of whom we have a record was Henry, a manufacturer of worsted cloth in Norwich, who moved to Hoveton in 1665. The last Negus was Christabella, who married James Burroughes. It was Chrisobella Burroughes who commissioned Humphry Repton to create the elegant new Hoveton Hall we see today. 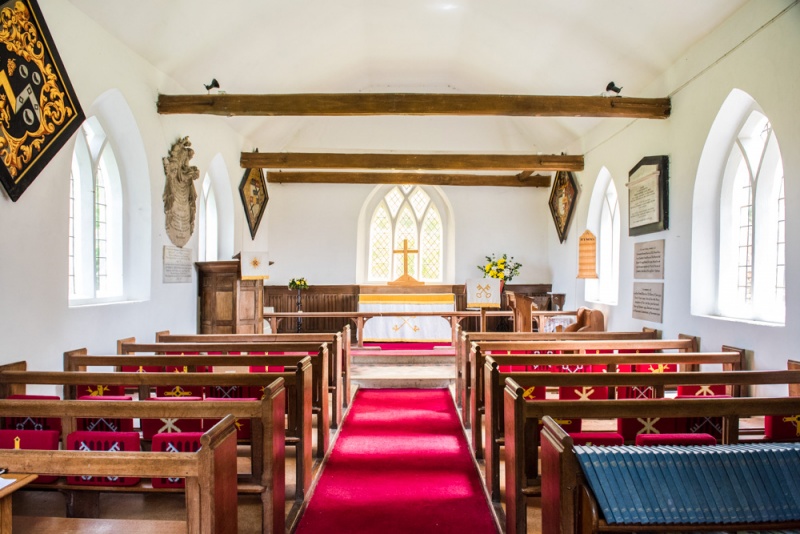 The Aufrere family owned Hoveton Old Hall, which began as an Elizabethan farmhouse owned by the Cutting family. The most memorable Cutting was Giles, an attorney at law born in 1649, Giles Cutting had a reputation as a devious and unscrupulous man. as the church guidebook humorously puts it, 'He was remarkable for his ricks and Knavery, having for a long time cheated everybody he had any dealings with and last of all himself - he died in the Fleet prison'.

After Cutting's death, the estate passed to his daughter Mary, who married Anthony Aufrere, the rector of Heigham. Aufrere was descended from Antoine Aufrere, Marquis de Corville, who came to England around 1685 and was minister at the French Chapel in the Savoy Palace in London. His grandson, also named Anthony, scratched his name and the date April 1772 over the coping of the entrance door.

The church boasts some very fine painted 18th and 19th-century hatchments to the Negus and Aufrere families. The Negus family hatchments carry the scallop shell design, and the Aufreres have a cluster of grapes.

The Negus hatchments are as follows:

There are three Aufrere hatchments:

There is a circular font dated to the late 19th century, with four pattee crosses set into roundels.

The church did possess some very good silver, but this was sadly stolen, and it now uses a patten and chalice once owned by the redundant church of Sco Ruston.

The church is normally open to visitors during daylight hours. There is extremely limited parking in front of the church. I parked in a wide spot on the lane leading to Hoveton Hall, just west of the church, but this proved to annoy a couple of dogs in the nearby cottage, and annoy the cottage owner even more, so I quickly moved on. 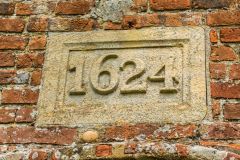 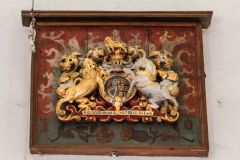 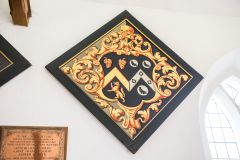 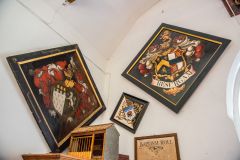