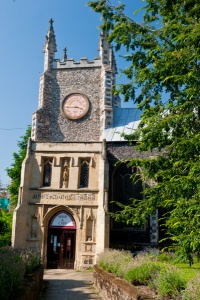 St Michael's is a 14th-century church with an oddly truncated tower with strikingly tall pinnacles. The pinnacles were added when the top storey of the tower was removed for safety reasons in the late 19th century. The church itself stands on one of the oldest Saxon foundations in Norwich, possibly a cremation-cemetery of the 5th or 6th century.

The tower is a familiar local landmark, in part because of the clock face, which dates to 1827 and is inscribed 'Forget me Not'.

The earliest name we know of was St Michael at Motstow; that is, at the market, or meeting place. The name changed after the Archdeacon's court was held here, so the name essentially means 'at the court'.

One of the first things you notice walking along the road is how high the churchyard is. This is the result of centuries of burials crammed into the small churchyard.

The south porch stands out from the main body of the church. The porch is two storeys high and the facade is made almost entirely of dressed stone, unusual in Norwich, where almost all church construction is in knapped flint or rubble.

There is a frieze over the porch doorway, with a row of 'M's' for Michael. and carvings of St Michael and a dragon. It is very odd (especially in Norwich) that the porch gives entry directly into the tower rather than into the nave. 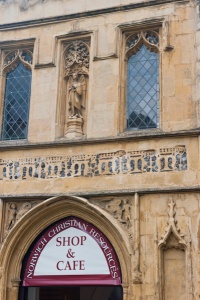 The 15th-century timber roof of the nave is impressive, with carved figures of angels. The angels stand out against the dark timbers due to a repainting in the 19th century.

There is a late medieval font in fairly typical East Anglian style, but it is not the font that draws your eye; it is the elaborately carved 17th-century cover, with an open canopy topped by the figure of a dove. The dove sits atop a classical obelisk, while another obelisk is on the font lid. Nearby, flanking the tower arch, are paintings of Moses and Aaron. These once formed part of an altarpiece.

Behind the font is a very simple mural monument to Jacques de Hem (1603), crammed into a corner, with figures of Hem and his wife beneath a pediment decorated with symbols of mortality. We do not know who Hem was, but the name suggests that he was one of those 'Strangers' (religious refugees from Flanders) who swelled the population of Norwich in the Elizabethan period. Most were weavers, invited to Norwich to revitalise the local cloth industry.

The chancel appears earlier than the nave, probably 13th century, with a large Perpendicular east window. Here is gathered fragments of medieval glass. There used to be a medieval screen, but this has been moved to the Cathedral.

St Michael's was declared redundant in the 1960s and is now a bookshop and cafe. This does rather obscure some of the historic furnishings, but on the other hand, it makes a nice, relaxing place to browse or have a hot drink in beautiful surroundings. at least it is good to see historic buildings being used rather than left to decay! Though the angel roof is lovely, what really caught my eye was the carved font cover. The delicacy of the carving is quite appealing, and something out of the ordinary.

The church is open daily. 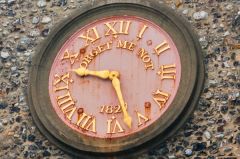 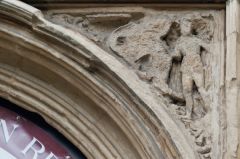 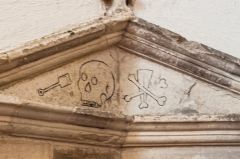 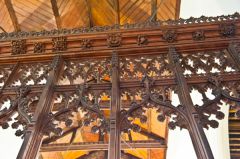 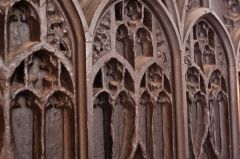 More self catering near St Michael at Plea

More bed and breakfasts near St Michael at Plea