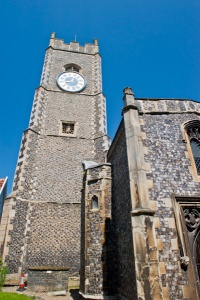 St George is an important saint in the history of Norwich; he is the patron saint of Norwich, and though there is only one other church dedicated to him in the city, the powerful Guild of St George was the major body of civic government throughout the late medieval period and up until 1731.

There was a church here in the early medieval period but the building we see today is the result of a major rebuilding in the 13th century. The oldest parts of the building are the nave and chancel (both 13th century). The tower was rebuilt around 1430, with a north porch and aisle added in 1445, a south aisle in 1490, and a clerestory about 1600. 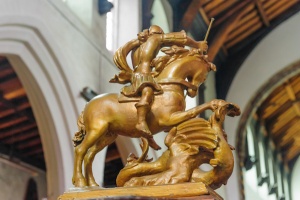 Much of the interior dates to a late Victorian restoration, but there is plenty to see from earlier time periods. The font is 13th century, topped by a 17th century carved wooden cover. Beside the font is a stone Bread Table, and a wall monument to John Symonds (d. 1609). Symonds was a merchant tailor who rose to become Sheriff in 1603. He left 2s per week in his will for the poor of the parish, to be distributed in the form of bread.

This weekly dole was dispersed from the Bread Table until 1891, when the money was given to Norwich Consolidated Charities for wider general distribution to needy causes across the city. It is not clear whether the Bread Table was erected at the same time as the monument or was already in use before then. The monument shows Symonds and his wife Olive facing each other across a prayer desk. There are no effigies of children, suggesting that the couple died childless.

The name has nothing to do with burials; it comes from the Old English word 'tom', meaning empty, so Tombland meant simply 'empty space'. It was empty because it was used as the main market place during the pre-Norman period, and the church overlays part of the market.

The pulpit is worth a look; it is 17th century and is a cut-down version of a three-decker. The sounding board, or tester, may be even earlier. The front panel has very nice inlay in ivory.

The most obvious feature in the chancel is the huge reredos behind the altar. This dates to 1730 and is set behind altar rails from the early 17th century. A medieval altar slab is set on the post-Reformation altar table.

There are a wealth of 17th and 18th-century memorials in the church, including numerous monuments to members of the Ives, Blake, and Maltby families. 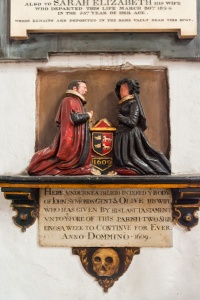 One of the finest memorials in the church is an alabaster monument by carver Nicholas Stone to Thomas Anguish (1536 - 1617). This can be seen on the wall beside the organ. Anguish was a prominent alderman and established an educational charity that is still in operation.

He lived on the corner of Wensum Street and Tombland, in a house now incorporated into the Maid's Head Hotel. After years of civic service, he was elected mayor in 1611.

As was customary, his election was celebrated with a display of fireworks outside his house. Unfortunately, some fireworks exploded and 33 people lost their lives in the ensuing panic. From that time fireworks were outlawed on feast days and guild days.

The Anguish monument is set on the wall above the seat he used for attending services. Curiously, it cost £20, twice the money he set aside in his will. He is depicted clothed in his mayoral robes, facing his wife across a prayer desk.

The couples' 12 children are depicted on the back of the monument behind them. Five children carry skulls or rest their heads on them, indicating they died young, before their parents. Sculptor Nicholas Stone is best known for his monument to John Donne in St Paul's Cathedral in London. 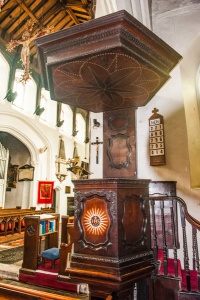 Perhaps more impressive is a memorial to Mary Gardiner (1713-1748), attributed to Peter Scheemaker, who is best known as the sculptor of William Shakespeare's memorial in Westminster Abbey.

The inscription on her monument is telling; it describes the status and accomplishments of her male relatives; and an indication that women were only thought to be important in their relationship to the men in their lives.

The fact that the Gardiner family could afford to hire Scheemaker indicates just how wealthy they were, for Scheemaker was among the most sought-after sculptors in 18th century England. The memorial shows a cherub drawing a veil across a bust of the deceased.

The north aisle contains the Lady Chapel, with an altar canopy that was brought here from the redundant church of All Saints. The altar itself came from St Simon & St Jude. In the chapel is a statue of Our Lady; this is not original but a 19th-century copy of the 16th century Flemish original.

Much earlier is a 16th century German painted relief plaque depicting St George, found at the west end of the aisle. The north aisle windows contain striking mosaic glass from about 1860, by the famous William Morris studio, and in addition, there are two 17th century Flemish glass panels in the north wall windows.

St George is a very interesting church, made still more intriguing by the 17th and 18th-century monuments. The church is currently open 3 days a week, but do check first before visiting. 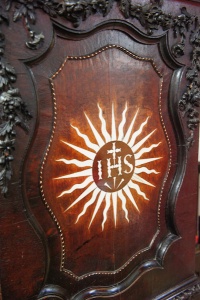 Ivory inlay on the pulpit 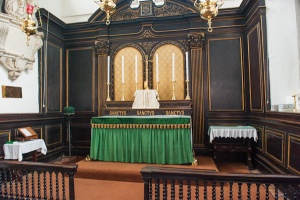 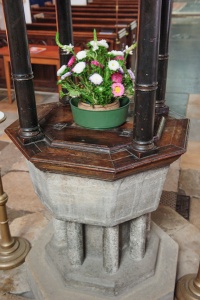 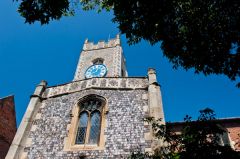 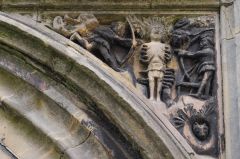 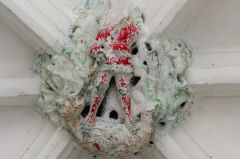 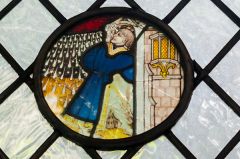 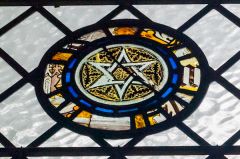