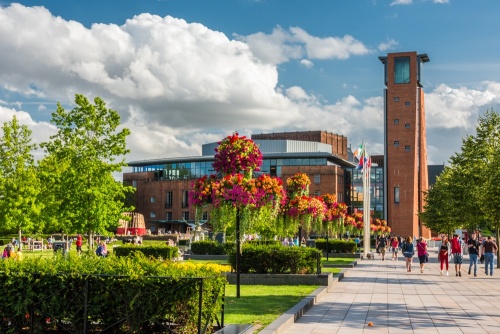 If you enjoy classical theatre, the Royal Shakespeare Theatre is THE Shakespeare theatre, hosting performances of Shakespeare's works with a cast including some of the finest theatrical actors and actresses in the world.

If you are considering attending a performance, be aware that tickets often go quickly. However, if you don't mind standing at the back of the theatre, you can often get standing room tickets on the day of the performance for a considerable discount.

The Royal Shakespeare Company was founded in 1875. Charles Flower donated land for the theatre and suggested that Stratford should have not just a theatre but a permanent company of actors subsidised by the town. The Shakespeare Memorial Theatre opened its doors in 1879. It initially only gave performances locally but within a few years the company began to tour, Its first tour to the USA took place in 1913.

The company was given a royal charter in 1925 to mark its 50th anniversary. The following year brought disaster when a devastating fire destroyed the stage and auditorium. A new theatre opened in 1932.

In 1958 the Company acquired Aldwych Theatre in London and began to operate on two fronts simultaneously. The Royal Shakespeare Theatre was given its charter in 1961.

Since then the Company has moved from the Aldwych Theatre to The Barbican in London, and created the Swan Theatre in Stratford from the remains of the 1879 Memorial Theatre. The RST was demolished in 2007 and completely rebuilt. The new theatre was opened by HRH Queen Elizabeth II in 2011.

The theatre stands in a picturesque position on the bank of the River Avon and is easily reached on foot from central Stratford. It is also very well signposted from around the town centre.