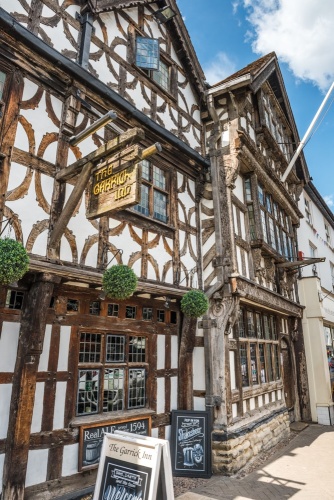 The Garrick Inn is one of the oldest buildings in Stratford-upon-Avon. It is a traditional half-timbered building dating back to the 16th century, though some parts of the building may be as old as the 14th century.

The inn was originally called The Greyhound but was renamed in honour of famed Shakespearean actor Sir David Garrick, who did much to popularise Shakespeare in the 18th century, even organising a Jubilee celebration in 1760. Garrick's efforts did much to create Stratford's tourism industry, based around Shakespearean sites.

The Inn stands at 25 High Street, on the west side of the street beside Harvard House. It is three storeys high, with the projecting upper floor that was so common in Elizabethan townhouses. The most likely date of construction is 1596, and it has been used as an inn since 1718.

The building was restored in the 1920s and again in 2005 - but that doesn't stop it from having a host of resident ghosts! An outbreak of the plague in 1564 was said to have started in the medieval inn on this site.