HERITAGE HIGHLIGHTS:   One of the great Baroque buildings of Britain 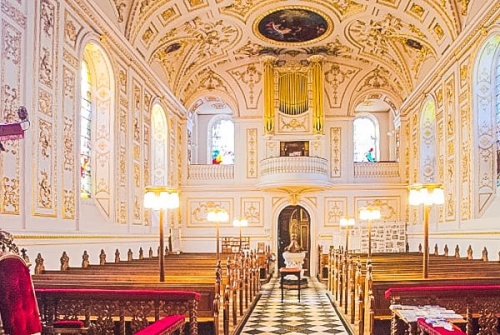 Within the grounds of Witley Court, one of the great stately homes of England and now an atmospheric ruin, stands St Michael and All Angels Church, one of the finest Baroque buildings in Britain, with an awe-inspiring interior resplendent with gilded decoration.

Though it forms part of the historic buildings of Witley Court, St Michael's is now and always has been a parish church, serving the nearby villages of Great Witley and Little Witley, rather than a private chapel. 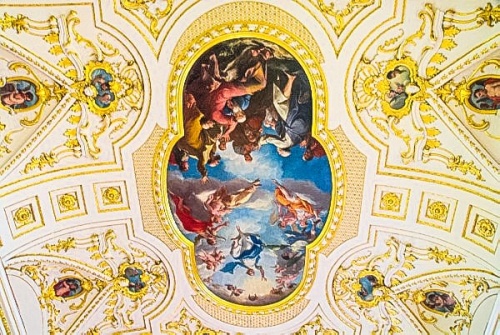 The church on this site predated the magnificent house by centuries; there has been a community here since the Saxon period. The present building was the brainchild of Thomas Foley, 1st Baron Foley, whose family bought the Great Witley Estate in 1655. When Foley died in 1732, the project was completed by his son Thomas, the 2nd Baron. The church was consecrated in 1735.

The second Thomas was responsible for the superb memorial to his mother, father, and five children who had predeceased them. The memorial was executed by the famous sculptor Michael Rysbrack at a staggering cost of Â£2,000.

The interior of the church looked nothing like it does now; it was a simple design with a flat, unadorned ceiling and plain window glass. There was a pulpit with a sounding board, a lectern, and Biblical texts painted on a wooden reredos. 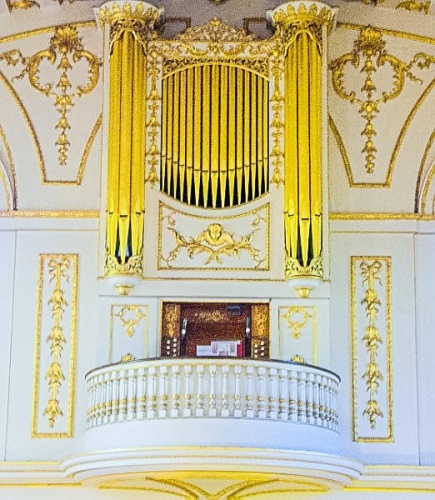 The 2nd Baron Foley must not have been satisfied with the new church, for he redecorated the interior in 1747, transforming the building into the magnificent structure we see today.

Foley bought a number of exquisite Baroque fittings from the Duke of Chandos' house of Canons Palace in Edgware, London, including 10 painted-glass windows by Joshua Price depicting biblical scenes, an oil on canvas painting of The Ascension by Antonio Bellucci, and a gilded organ.

The flat ceiling was rebuilt as a curve, especially to hold The Ascension painting. Moulded papier-mache wall and ceiling decoration was recreated from the original at Canons Palace.

In 1846 the church was transformed again, this time by Lord Ward, later to become the Earl of Dudley. Ward replaced the Georgian box pews, lectern and pulpit, as well as the 18th-century font and the flooring. 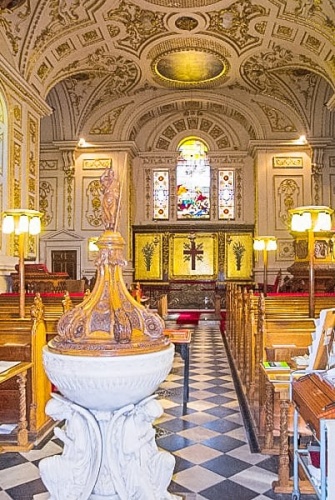 The organ was enlarged and rebuilt in 1860 by the prestigious Nicholson & Co. firm of Worcester.

The ornate gold mosaic panels of the reredos were designed by the Countess of Dudley in 1913. Notice the three lamps hanging in the sanctuary. They were given by the Countess in thanks for her husband and his two brothers returning safely from the Boer War.

After Witley Court was destroyed by fire in 1937 the church was left to decay. It was not until 1965 that the process of restoration was begun. 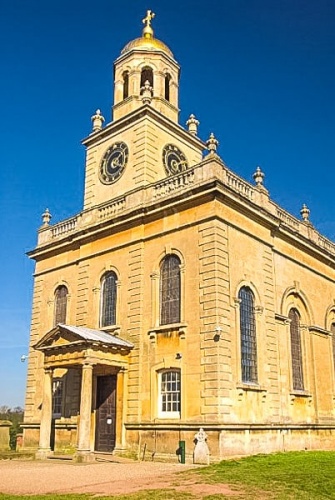 Visitors can descend into the crypt to see lead coffins and the magnificent granite tomb of Lord Dudley.

Also in the crypt is the 1804 tower clock, designed by Samuel Thorp. It has been restored to full working order. 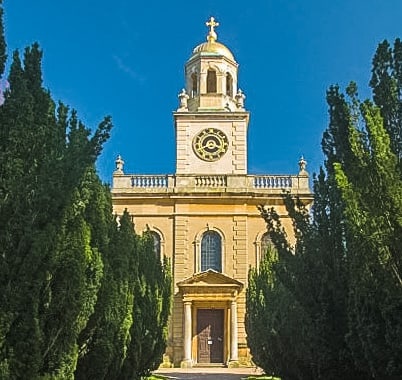 Another view of the exterior

St Michael and All Angels Church is in the Witley Court grounds. The Court is signposted on the A443, 10 miles northwest of Worcester and just east of Great Witley village.