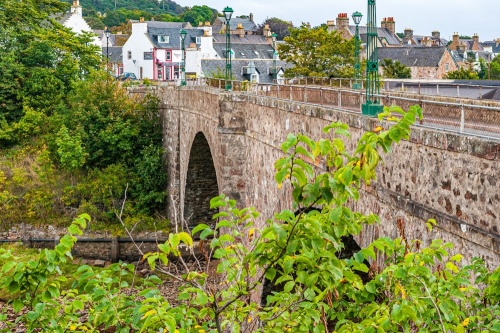 Helmsdale is a picturesque village and port in the northeastern corner of Sutherland. The town grew up on the north bank of the River Helmsdale where it empties into the North Sea.

VisitScotland, the official Scottish tourist board, rather succinctly sums up Helmsdale's history as being based on 'golf, herrings, and salmon', which, though accurate as far as it goes, doesn't tell the whole story. 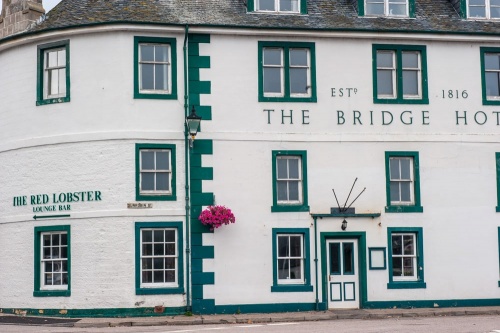 We know that the Helmsdale area was settled at least as early as the 4th century, for the early Christian missionary St Ninian came here around AD 390 to convert the natives. St Donan carried on Ninian's work in the 6th century, but the Christians of The Strath came under attack by the Norse in the 9th century. The village takes its name from the old Norse 'Hjalmundal', or 'valley of the helmet'.

The Norse didn't always fight the natives, however; Helmsdale was the site of a bloody battle between two Norse chieftains, Swein and Olvir, which resulted in a comprehensive victory for the former. 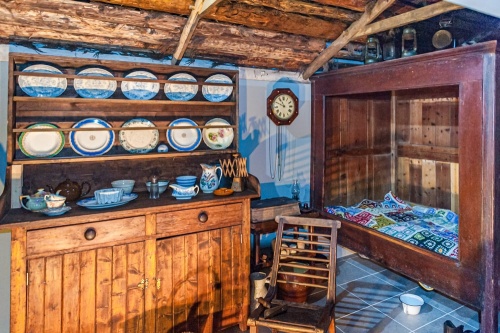 The premier heritage museum for all of Sutherland, Timespan is located in a modern building beside the river Helmsdale. The wealth of historical materials on display here is remarkable, from recreations of traditional crofting conditions to local archaeology and social history. Timespan is a delight and an essential place to visit to really understand Highland history and culture.

In addition to its role in preserving Sutherland's cultural heritage, Timespan provides an art gallery showcasing the best of local art with a changing programme of exhibits throughout the year.

The museum also maintains a large archive of historical documents which are an invaluable aid to people researching their family history. 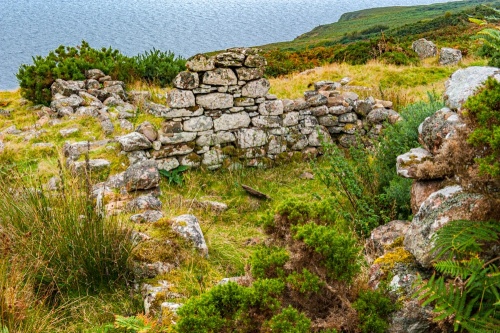 You can experience the poignant tale of the Clearances for yourself at Badbea, a few miles north of Helmsdale on the A9. In this bleak clifftop settlement, people who had been moved off their land were forced to eke out a precarious existence.

So dangerous are the cliffs at Badbea that the residents did not only tether their animals; they tethered their children as well, to prevent them falling over to their deaths.

The now-deserted village is incredibly moving, and brings home in vivid detail just how difficult life was for the families who were forced off the land they had lived on for generations to make way for sheep and cattle. 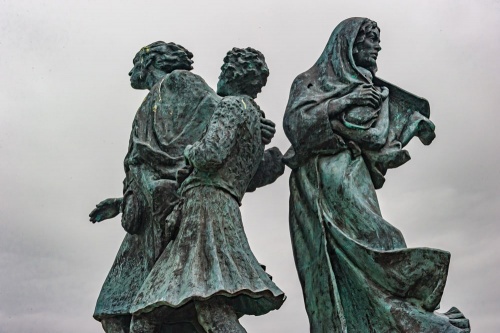 Standing a public park beside the A9 and overlooking the River Helmsdale is a striking modern sculpture commemorating the men, women, and children who were forced from their homes during the Highland Clearances and left Scotland in search of a better life abroad.

The moving artwork was crafted by Gerald Lang and shows a family of four. A kilted man leads the way, looking forward and guiding a boy at his side, while behind is a woman bearing a baby in a shawl, looking back at the life she is leaving behind.

The sculpture was officially unveiled in a ceremony on 23 July 2007 by Alex Salmond, then the First Minister of Scotland.

A counterpart sculpture was unveiled in Winnipeg, Manitoba, Canada in 2008. It commemorates the fact that 100 settlers from this area of Sutherland helped found the city of Winnipeg in 1813.

Marking the approach to the sculpture is a row of flags including the Union Jack, St Andrew's Cross, and the national flags of Canada, the USA, Australia, and New Zealand, major destinations for emigrants from Sutherland. 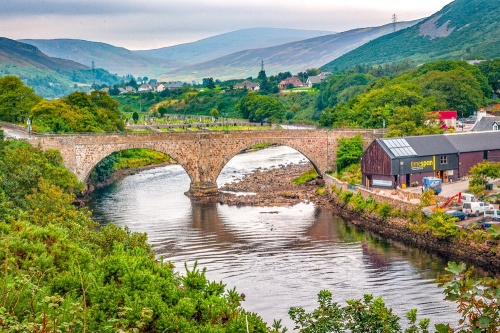 The River Helmsdale and Telford's Bridge

The Emigrants sculpture stands in Couper Park. The area where the park now stands was the site of Helmsdale Castle, a fortified tower house built by the Earls of Sutherland around 1488. The structure was altered by the Gordons of Navidale in 1616 but later allowed to drift into decay. It was pulled down in the 1970s to make space for the A9 approach to the new road bridge over the River Helmsdale.

The most famous, or infamous, episode in the long history of Helmsdale Castle came in 1567 when Isobel Sinclair, the 11th Earl of Sutherland's aunt, poisoned the Earl and his wife in an attempt to seize the earldom for her son.

She attempted to poison the Earl's heir Alexander at the same time, but her own son drank the poison by mistake and lost his life. Her plot laid bare, Isobel took her own life rather than allow herself to be executed in public.

This convoluted and bloody tale was said to have inspired Shakespeare's Hamlet.

The River Helmsdale offers some of the finest salmon fishing in Scotland and draws fishermen from around the world. The river is divided into a dozen beats, six above Kildonan Falls and the remainder below. So popular is the River Helmsdale in the fishing world that there are long waiting lists for slots on all the beats.

The harbour was built in 1818 to handle the increasing number of boats visiting Helmsdale as part of the thriving herring fishery. 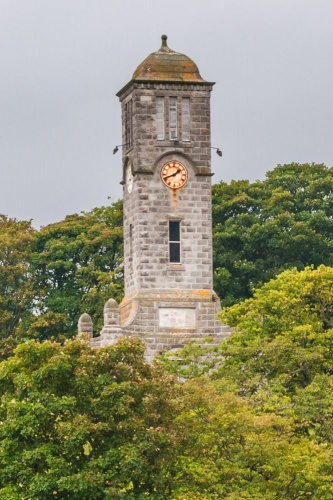 You can't explore Helmsdale without noticing the memorial clock tower, which seems to catch your eye no matter where you are in the village. The tower was built as a combination public clock and memorial to those who lost their lives in WWI. It was unveiled on 21 March 1924.

The memorial was later amended to include the names of those who died in WWII. In total there are 58 names inscribed around the base, 40 from WWI, 16 service personnel from WWII, and two WWII civilians.

The eye-catching monument is made of grey ashlar on a dressed stone base. It was intentionally set on the highest point of land in the area to act as a landmark for sailors navigating the nearby coast.

The tower was built by John Taylor and Company, who were also responsible for similar memorials in Scotland and England. 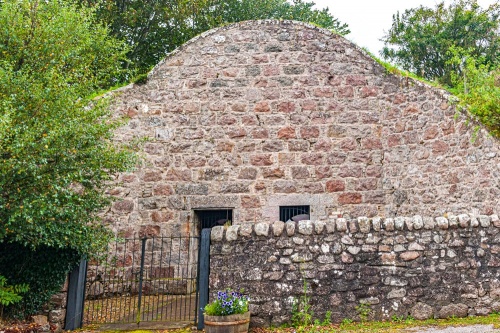 At the base of the hill on which the war memorial stands is a well-preserved ice house, built to store and pack salmon. This is one of two ice houses in Helmsdale. The other, built near the harbour, was pulled down, but this one has survived.

The structure is actually built into the slope of the hillside, to take advantage of the natural cooling qualities of being underground. The outer section, or anteroom, was used for packing the fish, while beyond was a vaulted chamber for storing ice. The ice house roof is covered with earth and a layer of turf to provide extra insulation.

A beautiful stone bridge designed by the famous Scottish engineer Thomas Telford spans the River Helmsdale a few hundred metres upriver from the modern A9 bridge. Telford's bridge boasts two broad spans and was completed in 1818. It is still perfectly functional and links the railway station on the west bank with the A87 on the east bank. 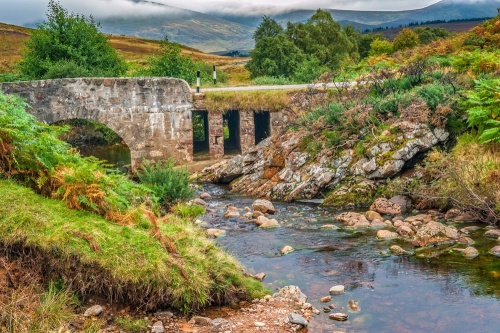 A 20-minute drive from Helmsdale brings you to the Suisgill Estate, where in 1869 a man named Robert Gilchrist found a nugget of gold. Gilchrist's discovery launched the Great Sutherland Gold Rush and prospectors descended on the area around the Kildonan and Suisgill Burns.

A shanty town known as Baile an Or (Gaelic for 'Town of Gold') sprang up and this quiet corner of Sutherland was suddenly home to over 600 people. The Duke of Sutherland tried to exert some control over the situation by demanding a license fee and a 10% Crown royalty.

As a result, the number of prospectors dropped by two-thirds, but the real death knell to the gold rush was the simple fact that there wasn't enough gold to make it worthwhile. When the herring fishery began in August 1869 most of the prospectors left to seek more gainful employment, and the gold rush fizzled as quickly as it had begun.

Today, visitors can rent or buy gold-panning equipment from Timespan, and try to find their own golden reward in Kildonan Burn.

The third Saturday in August is the highlight of the year in Helmsdale, for it marks the annual Helmsdale Highland Games, a celebration of traditional Highland culture.

Helmsdale is on the A9, about 17 miles north of Golspie and 35 miles south of Wick. There is a public car park on Shore Street, on the north side of the river, near the harbour.

Nearby accommodation is calculated 'as the crow flies' from Helmsdale. 'Nearest' may involve a long drive up and down glens or, if you are near the coast, may include a ferry ride! Please check the property map to make sure the location is right for you.

More self catering near Helmsdale, Sutherland