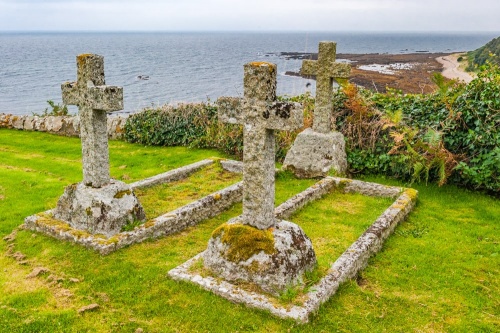 An ancient chapel attributed to St Ninian lies within Navidale Cemetery, perched on a headland just north of Helmsdale. The modern burial ground contains a roughly oval mounded area, now covered in turf, thought to be the chapel site.

The name Navidale may come from a hybrid Gaelic and Norse word for a valley of a holy place. The Gaelic term 'neimhidh' refers to a holy place that may have been in existence before the arrival of the Norse, who added their word 'dair' to refer to the glen, or valley. If true, the name would suggest that Navidale was a sacred place long before the arrival of the Norse.

There are very few known early Christian chapel sites in Caithness. There is a pre-Reformation chapel site at Helmsdale and another at nearby Gartymore, suggesting that St Ninian's Chapel at Navidale was part of a network of chapels in the region, though few have survived. 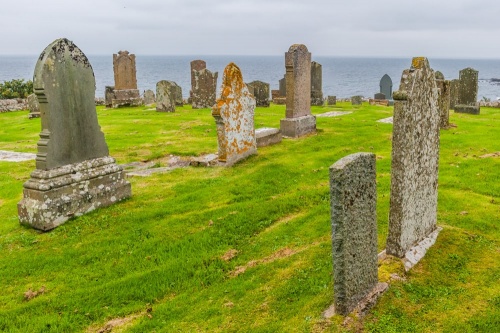 The burial ground, looking out to sea

According to the historical record, St Ninian's Chapel was burned by the Mackays in 1556. Burnt stones uncovered during grave-digging lends weight to this story. 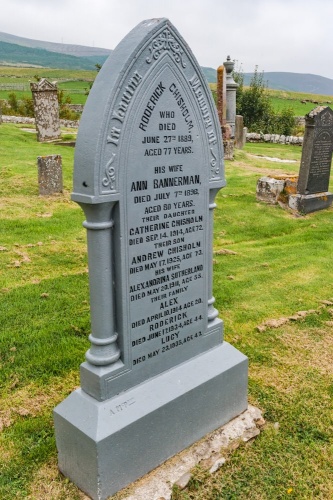 A Class I Pictish symbol stone found here in 1968 suggests that this was indeed an ancient site. The stone was carved with a triple disc above a carving of an elephant. The stone is roughly carved, suggesting that it had not been finished, and may have been carved on or near this site. The stone was taken to Dunrobin Castle Museum for preservation.

The present graveyard is contained within a stone wall, probably dating to the 19th century.

Tradition suggests that a holy well dedicated to St Ninian lies near the cemetery, but generations of archaeological investigators have failed to find it. 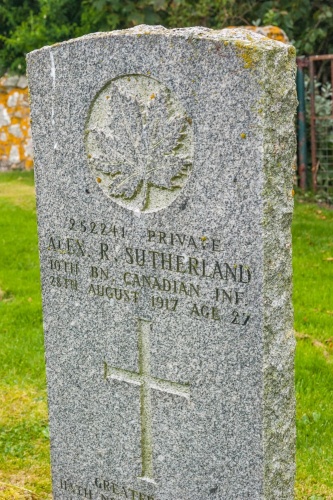 Navidale Cemetery is preserved by the Commonwealth War Graves Commission. There are two war graves, one each from the First and Second World Wars.

One commemorates Donald Sutherland, 57, an able seaman with the SS Gretafield, sailing out of Newcastle, who died in 1940. The second remembers Alexander Robert Sutherland, a private with A Company, 10th Battalion, Canadian Infantry. He died in 1917 at the age of 27. 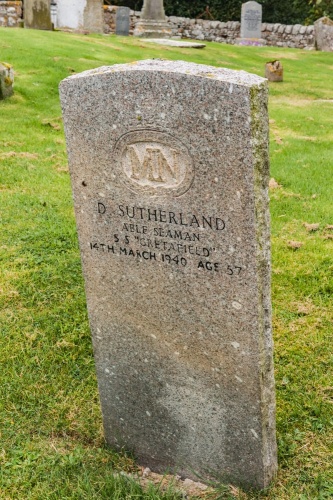 Navidale Cemetery is signposted on the A9 just north of the East Helmsdale roundabout. Look for the brown tourist sign that directs you down the single-lane road towards Navidale Farm. The cemetery is off to the right of the lane just as you reach the farm gates.

The cemetery itself will take very little time to explore. The chapel site is scarcely recognisable on the ground, as it blends in with the turf-covered burial ground. However, the site is superb, with views along the rocky coastline below, and there are several interesting 19th-century memorials, several remembering multiple generations of the same family.

The cemetery is open at any reasonable time.

Nearby accommodation is calculated 'as the crow flies' from Navidale Cemetery and St Ninian's Chapel. 'Nearest' may involve a long drive up and down glens or, if you are near the coast, may include a ferry ride! Please check the property map to make sure the location is right for you.

More self catering near Navidale Cemetery and St Ninian's Chapel