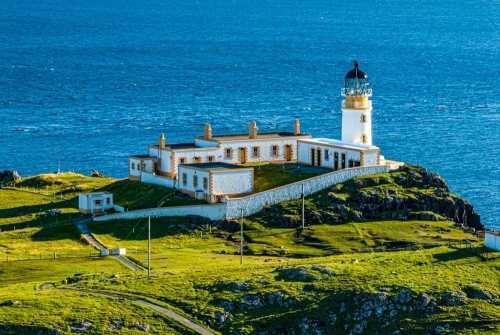 Neist Point Lighthouse is among the most famous lighthouses in Scotland and forms part of a spectacular clifftop walk. The lighthouse stands atop high cliffs near Glendale, at the most westerly point on the Isle of Skye.

Neist Point Lighthouse was erected in 1909 to a design by David Stevenson of the famous Stevenson family of engineers. It is composed of a white tower standing 19m high, at an elevation atop the cliffs of 43m. The lightroom atop the tower is reached by a flight of 42 steps.

The tower is surrounded by low outbuildings, contained within a perimeter wall. The contractor was W Hugh MacDonald of Oban, who built the lighthouse and secondary structures at a total cost of £4,350. The lantern alone cost £1,100 and was made by the firm of Dove & Co. The lightroom machinery was by Milne & Co., and cost £418.

Neist Point Lighthouse was declared a Category B listed building in 1971. 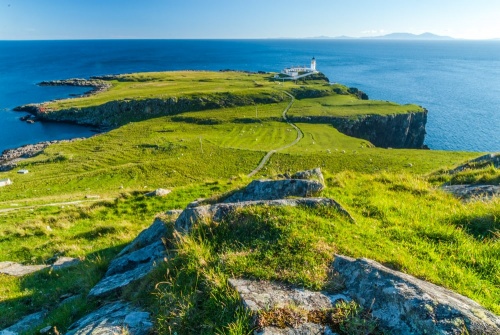 The light went operational on 1 November 1909 and was followed by the foghorn on 25 June 1910. The Neist Point Lighthouse was automated in 1990 and is still operated and maintained by the Northern Lighthouse Board. The secondary buildings within the lighthouse complex were been sold off. They were used as holiday accommodation for a time.

The Neist Lighthouse sends a signal consisting of a flashing white light every five seconds. The light has a range of 16 nautical miles (roughly 24 miles) and is rated at 480,000 candle power.

Please note that there is no public access to the lighthouse! 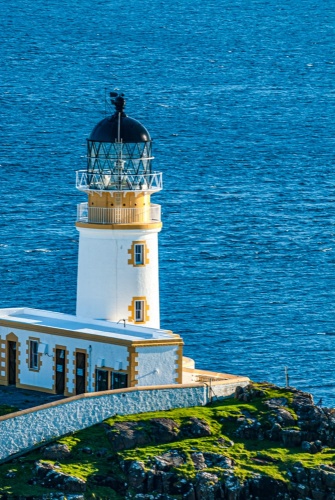 Neist Point is a superb location for spotting whales, basking sharks, dolphins, and porpoises, and the Point is home to a huge variety of seabirds, including guillemots, razorbills, shags, and gannets. It is also one of the best places on Skye to watch the sunset.

The dramatic landscape of Neist Point has drawn the attention of filmmakers. Scenes from the Keanu Reeves film 47 Ronin were filled here in 2012 and it was also a setting fr the 1996 film Breaking the Waves.

Please take care near the cliff edges! I can't stress this highly enough. There are no fences or other safety barriers in place. In 2013 a visitor wandered too close to the cliffs and fell 30m to the rocks below, tragically causing her death. Please be sensible and stay well back from the edge. 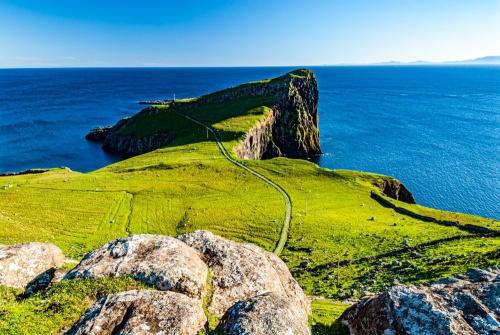 The view towards Neist Point

Neist Point Lighthouse is the punctuation point to one of the most popular walks on the Isle of Skye, a wonderfully scenic stroll from a parking area west of Glendale, offering panoramic views over The Minch to the Western isles.

The walk starts at a public car park at the end of the road in Waterstein. Take the B884 through Glendale and turn left onto the single-track road signposted Waterstein. Bear left at the first road junction, staying on thew Waterstein road. 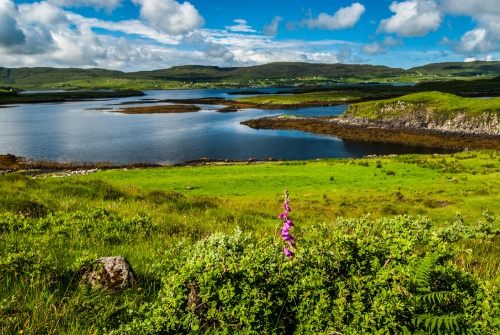 You pass a viewpoint for Loch Mor on your left, with wonderful views over this picturesque inland loch. Past the loch, the road bends south. You cross a cattle grid and the road bends again, to the south-west. Simply carry on to the end of the road and the small car park.

From the car park, go through the double gates by an old shed and take the concrete path that takes you down some steep steps. There is a useful handrail here to make the descent easier.

At the bottom of this steep section you will see a small aerial ropeway (like a miniature cable car) that made it easier to get supplies up and down the hill. 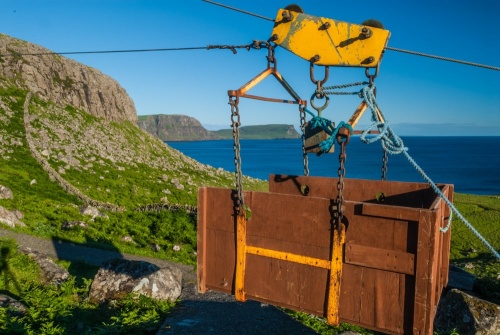 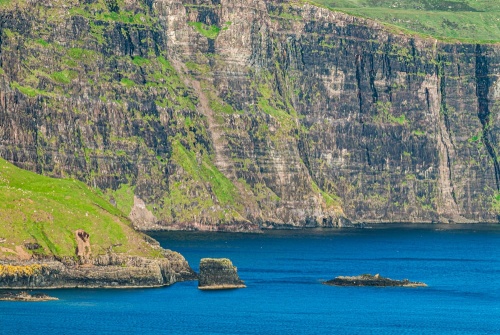 The view to Waterstein Head 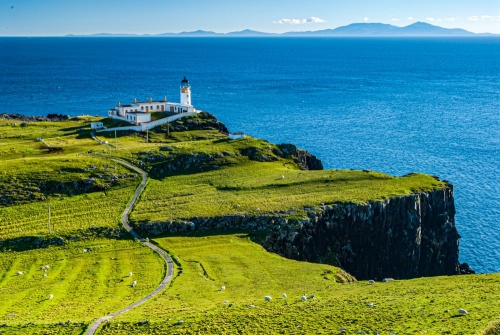 From the base of the hill, the concrete path heads across a field to the crest of the next hill, where you get superb views of the lighthouse ahead. To your right, you can see across The Minch to the Western Isles.

Past the crest of the hill you can see a small jetty to your left, with a disused crane on the clifftop, but the path continues straight towards the Point and the lighthouse.

The final stretch of the walk can be boggy at times, so it is always a good idea to wear good waterproof footwear.

The return walk from the car park to the lighthouse and back is roughly 1.75 miles (3km) and will take 1-2 hours depending on how long you take exploring the headland.

Nearby accommodation is calculated 'as the crow flies' from Neist Point Lighthouse. 'Nearest' may involve a long drive up and down glens or, if you are near the coast, may include a ferry ride! Please check the property map to make sure the location is right for you.