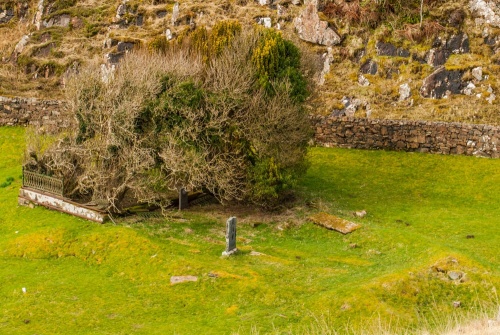 Within the burial ground are a pair of late-medieval gravestones bearing carvings of claymores and foliage, while a third gravestone has the figure of a knight in a mail surcoat. These gravestones can be difficult to find, depending on how badly the turf has been allowed to overwhelm the chapel site.

So, who was St Assind?

That's a thorny question, for it appears that the only record of the saint is the traditional name assigned to the Bracadale chapel. Either he, or she, was a very local saint, or the name is adapted from another, better-known saint.

The chapel remains are oriented on a NE-SW axis with walls of rubble masonry cemented with lime mortar strengthened with pieces of shell. The layout forms two cells; one a rectangle measuring 10m long and 5m wide, the smaller forming a 5m square. Both compartments have walls 1.5m wide and roughly 0.7m high.

The chapel walls have been badly damaged, with later graves lying inside, outside, and across the foundations. 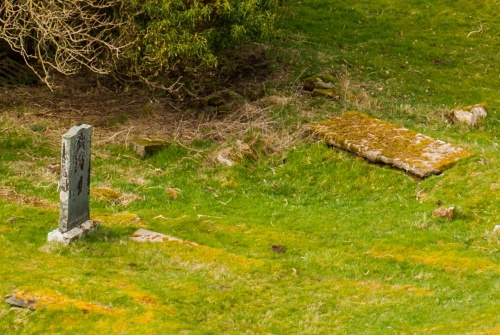 Graves within (and on top of) the chapel foundations

We know that there was a church, or chapel, dedicated to St Assind on this site at least as early as the late-medieval period, but the first written record we have comes from 1632, when Master John M'kinnon (MacKinnon) was presented to the living.

This ancient building must have been allowed to fall into decay, for a new church was built in the middle of the 18th century. That building was repaired in 1783 and replaced in 1831 by the simple rectangular church we see today. The 1831 church was built to a design by architect William Smith.

The chapel site is within the burial ground located directly behind Bracadale parish church on the A863, immediately west of its junction with the B885. There is parking by the church.

It can be difficult to make out the chapel layout at ground level, so badly has the site been compromised by later burials. You can, however, get a very good overview of the site from the B885 road from Portree, which overlooks the burial ground. There is space to pull off the road onto the verge almost directly above the burial ground, and from there you can see the chapel layout reasonably clearly.

I hesitated on what Heritage Rating to assign St Assind's Chapel, as so little of the building can be seen and nothing is known about its origins or about the saint to whom it is dedicated. The presence of the medieval grave slabs, however, suggests that the cha[el must be of great age.

About St Assind's Chapel, Bracadale
Address: Bracadale Parish Church, A863, Bracadale, Isle of Skye, Highlands and Islands, Scotland
Attraction Type: Historic Church
Location: The chapel is within the burial ground directly behind the Bracadale parish church, on the A863 immediately west of its junction with the B885.
Website: St Assind's Chapel, Bracadale
Location map
OS: NG355387
Photo Credit: David Ross and Britain Express

Nearby accommodation is calculated 'as the crow flies' from St Assind's Chapel. 'Nearest' may involve a long drive up and down glens or, if you are near the coast, may include a ferry ride! Please check the property map to make sure the location is right for you.