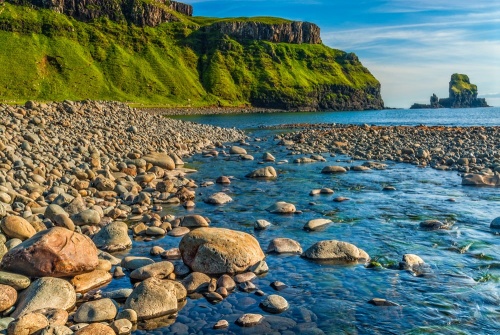 The beach at Talisker Bay has been called the finest on Skye -- quite a claim, given the competition for that title! The bay lies a few miles west of Carbost, on the western coast of the Minginish Peninsula.

Talisker is most famous for its links to the Talisker distillery, which is located, not in Talisker itself, as you might expect, but in Carbost. The pretty bay with its sandy beach is reached by a level walk from the end of the road.

The bay is punctuated by a dramatic sea stack at its southern end and faces almost due west, making it a perfect location to watch the sunset. 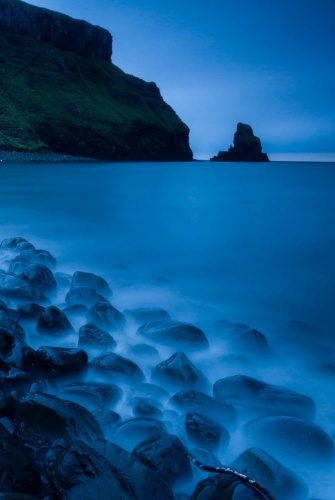 From Carbost take the minor road signposted 'Beaches', leading to Talisker. The road goes past the upper end of the Carbost Burn Waterfall, and across the largely uninhabited expanse of central Minginish. It ends in a wide turning area where there is room for several vehicles. Please leave room for other vehicles to turn around!

From the parking area there is an obvious blue sign labelled 'To the Beach', pointing down the left-hand fork of two roads. This roughly tarmacked lane acts as a drive for Talisker House, which you will pass after five minutes walk.

Talisker House dates to the early 18th century and was for many years the home of the heir to Clan Macleod's chieftain. Dr Johnson and his biographer James Boswell stayed here during their famous tour of the Hebrides in 1773, recounted by Boswell. Their host was Colonel John Macleod, 4th of Talisker.

The last Macleod to reside here was Donald Macleod, who left in 1820. The house eventually passed to Hugh MacAskill, who finished clearing the estate (i.e. removing crofting families to make room for animal grazing. In 1830 MacAskill founded the Talisker Distillery five miles away in Carbost.

The Talisker estate has been declared a Site of Special Scientific Interest (SSSI) by NatureScot, in part because it is home to two rare species of moths, including the Talisker burnet moth.

After the house you cross a footbridge over a small burn. Here the track becomes rougher, though still not challenging. Simply carry straight on until the beach comes into view. The walk takes roughly 30 minutes (so, one hour for a return trip) and is just over one mile (1.75km) long (2.25 miles return). The going is quite easy, making this a popular walk for families.

The trail emerges at the southern end of Talisker Bay, with views to a sea stack off to your left. The beach is divided roughly in two by the outflow of Sleadale Burn. The beach is at its best at low tide, when the low water exposes a stretch of golden sand. At high tides, the sand is completely covered, and the bay is lined with water-rounded stones and boulders.

The southern end of the bay is softer and gentler, while the northern end terminates in high cliffs, where a waterfall tumbles down.

We've visited Talisker Bay several times, including a wonderful evening trip that we hoped would allow us the view a spectacular sunset, but on that occasion, the weather didn't cooperate, but we still had a great time.

About Talisker Bay Walk
Address: Carbost, Isle of Skye, Highlands and Islands, Scotland, IV47 8SF
Attraction Type: Countryside
Location: Park at the end of the road at Talisker and follow the sign that leads past Talisker House to the bay, a distance of roughly 1.15 miles.
Location map
OS: NG314302
Photo Credit: David Ross and Britain Express

Nearby accommodation is calculated 'as the crow flies' from Talisker Bay Walk. 'Nearest' may involve a long drive up and down glens or, if you are near the coast, may include a ferry ride! Please check the property map to make sure the location is right for you.

Self Catering near Carbost