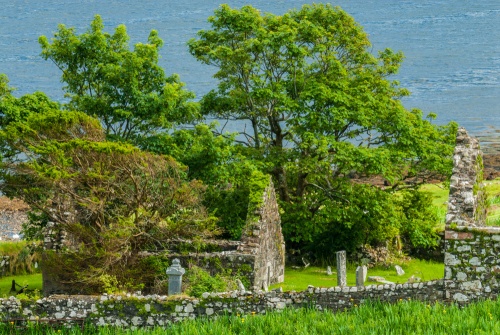 On the shore of Loch Eynort stand the ruins of two chapels within a stone-bounded graveyard. The smaller of the two chapels dates to the medieval period and very likely replaced a much older building dedicated to St Maelrubha, a 7th-century monk. 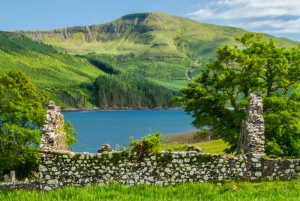 Maelrubha (also known by several variants such as Maol Rubha and Malruibhe) was an Irish monk, born in County Down in AD 642. He was descended from Niall, King of Ireland. In AD 671 he left Ireland for Scotland with a group of fellow monks, intent on spreading Christianity along the west coast of Scotland.

He travelled extensively along the west coast and founded numerous churches, particularly in Argyll. He settled at Applecross but undertook long missionary journeys throughout the Hebridean islands. He became one of the most popular Celtic saints in Scotland, surpassed only by Columba.

One of those journeys took him to Skye, where he founded several churches. He preached at Cill Chriosd, where the hillock where he celebrated mass is still known by the Gaelic term for 'Hill of the Mass'.

Did he found a church on the remote shore of Loch Eynort? Very possibly. 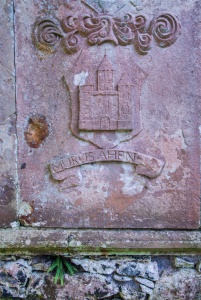 We do know that there was an ancient religious site at Eynort, dedicated to St Maelrubha, and in other places around western Scotland there are churches dedicated to him which we know he personally founded.

The medieval chapel was rebuilt after the Scottish Reformation, probably around 1732, and was used as a burial chapel for the MacLeods of Talisker, a branch of the MacLeods of Dunvegan. It is built of rubble dressed with freestone quoins, and is rectangular in plan, about 6.5m x 3.3m. The walls still stand to 2.5m, up to 5.5 at the peak of the gables. Curiously, the interior ground level is well below the ground level outside the walls.

Embedded in the chapel walls are a pair of memorial panels with the arms of the MacLeod family. At the east end of the south wall is a memorial to Donald MacLeod, 3rd MacLeod of Talisker, who died in 1732.

This seems to have been built into the fabric of the chapel, suggesting that the chapel was constructed especially to house it. This gives us the probable date that the medieval chapel was rebuilt, perhaps in honour of Donald MacLeod.

'If you can search you will find
no-one better in goodness
No-one better than him for
sure in giving, in relieving
in apportioning largesse,
forever applying himself to this.
If you were to look for greatness
of mind, you would scarcely
find an equal to him.' 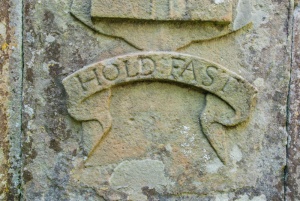 MacLeod married Christina, daughter of John MacLeod of Berneray and Contilich, thus unifying the two cadet branches of the MacLeods of Dunvegan. It is probable that Talisker House was built for the newlywed couple.

The other memorial inside the chapel is to William MacLeod, Tacksman of Ebost.

Several pieces of architecturally important carving have been found on the site, including a font carved with religious symbols, and a piece of a beautifully carved cross shaft. The cross shaft is now in the National Museum of Scotland in Edinburgh. There are numerous historic monuments inside the burial ground, with a fascinating array of heraldic carvings. Several carved grave slabs dating to the 14th and 15th centuries have been found in the graveyard.

The graveyard has a gateway facing the shore, a reminder that in the days before good roads reached Eynort bodies were usually brought here by sea.

This is a stunning location. The setting, with the chapels standing above the waters of the loch, and lush green hills rising on all sides, is simply outstanding. Eynort is located on a minor road from Carbost, off the B8009. Simply take the turnoff towards Eynort and follow the road until you reach the village.

The pavement runs out at the top of the loch, but the road continues towards the burial ground which you will see ahead of you by the shore. The site is open at any time.

When I visited I met an extremely talkative and friendly older man who told me that he had grown up in Eynort, then moved away and had not been back for several decades. He was effusive about living at Eynort, though he acknowledged that it could get a bit isolated in winter.

It was fascinating to hear someone who had grown up in the hamlet talk about the experience of living here when there were no decent roads, and travel by boat offered a much more reliable, though sometimes risky, way of getting around. 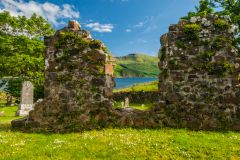 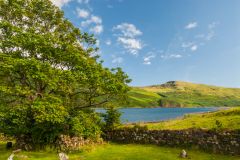 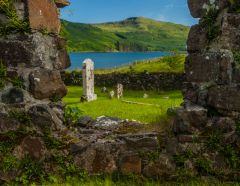 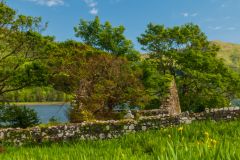 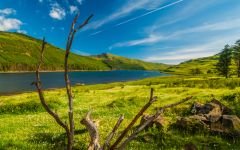 Nearby accommodation is calculated 'as the crow flies' from St Maelrubha's Chapel, Eynort. 'Nearest' may involve a long drive up and down glens or, if you are near the coast, may include a ferry ride! Please check the property map to make sure the location is right for you.