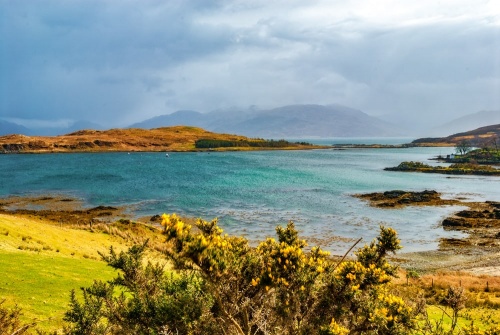 Isleornsay is a picturesque village on the east coast of the Isle of Skye's Sleat Peninsula. The village grew up around a sheltered harbour that spills into the Sound of Sleat. The harbour is protected on the east by the small island of Isle Ornsay (yes, it's confusing; the village of Isleornsay is all one word, while the island of Isle Ornsay is two words).

The island is tidal; that is, it is linked to the mainland at low tide. Isleornsay served as a centre for the busy herring fishery at the turn of the 19th century, and was a regular destination for steamship service from Glasgow.

Near the jetty is a pyramidal gazebo, built in the 19th century but converted to use as a dovecot in recent years. 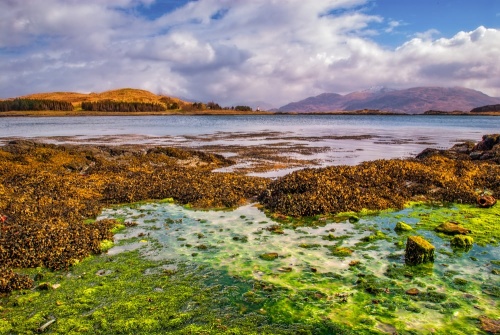 In 1746 Isleornsay harbour was the scene of historical drama, for it was here that Flora MacDonald was taken captive on the frigate Unicorn before sailing south to imprisonment in the Tower of London for her role in helping Bonnie Prince Charlie escape his enemies.

Isleornsay was part of vast estates owned by the MacDonalds of Armadale and in 1820 the village made history by being the first place on Skye to boast a public toilet.

Isleornsay acted as a jumping-off point for Scots emigrating to North America in the early 19th century, and later, to Australia. So many residents of the Sleat region wanted to emigrate that there was not enough space on ships to hold them all.

The village is thought to be the setting for an ancient religious settlement known as Eilean Dhiarmaid, or Diarmid's Isle. On the subject of religion, near the harbour is St Columba's Church, also known as The Mission Church, built in 1901 but closed for worship in the 1970s. 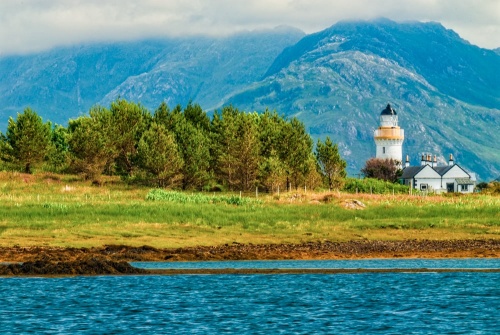 Sailors are protected from the rocky coast of Isle Ornsay (the island) by Isle Ornsay Lighthouse, built in 1857 by the famous Scottish engineers Thomas and David Stevenson. Thomas Stevenson's son was the author, Robert Louis Stevenson. The lighthouse stands on a rocky islet named Eilean Sionnach, accessed by a walkway from Isle Ornsay island.

The lighthouse used a revolutionary lighting system with extra prisms, making it visible further out to sea. This new system was exhibited for the first time at the Great Exhibition of 1851 in London.

The original prism stem is no longer in place, and the lighthouse had been fully automated since 1962. The former lighthouse keepers' cottages were purchased in 1966 by the naturalist and writer Gavin Maxwell (author of Ring of Bright Water). They are now let as holiday accommodation. 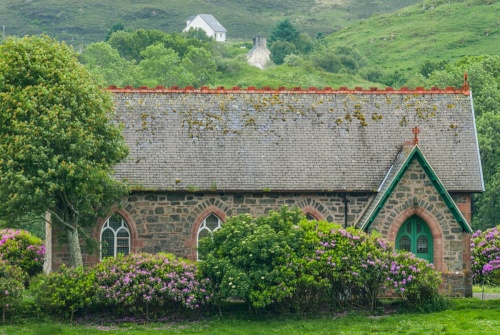 The lighthouse was used as a setting for the 2008 film Blessed, and for the 2015 novel The Ice Twins, by SK Tremayne.

In addition to the lighthouse, there is a smaller beacon light off the northern tip of Isle Ornsay.

Isleornsay's name in Gaelic is Eilean Iarmain, which translates loosely as 'tidal island'. By the harbour is the Eilean Iarmain Hotel, which dates to the early years of the 19th century. Between the hotel and the pier is a commercial sculpture gallery known as 'Gallery an Tealla Dearg'. 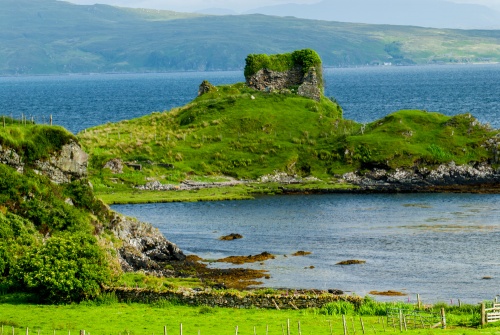 A few miles south of Isleornsay stands Knock Castle, a ruined medieval stronghold built on a rocky islet just offshore. It was owned by the Macleods of Sleat since the 13th century, but they were ousted by the MacDonalds, and then, in turn, by King James I. The castle has been ruinous since the 17th century.

A few miles further south is Armadale, terminus of the ferry from Mallaig and home to Armadale Castle, the seat of Clan Donald, Lords of the Isles. The castle we see today is largely the result of restoration and rebuilding in the early 19th century, and it stands within glorious gardens. In the grounds is a museum tracing the 1500-year history of Clan Donald. 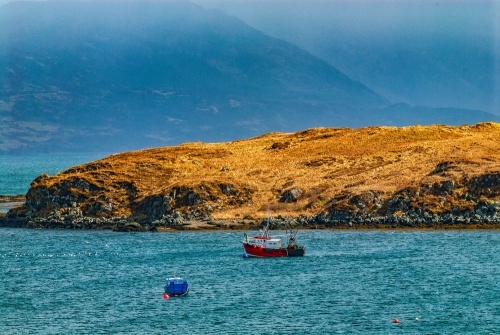 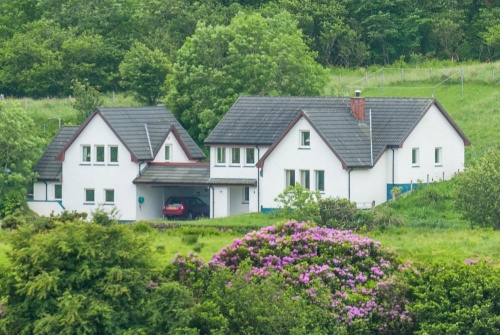 A picturesque house near the harbour

Isleornsay is 7 miles (11km) south of Broadford on the A851. Turn off on the single-track road at Duisdalebeg, signposted to Isleornsay, and follow the road to the end. You will pass over an old hump-backed bridge, thought to be the last hump-backed bridge still standing on Skye. There is parking near the pier and hotel.

About Isleornsay, Skye
Address: Broadford, Isle of Skye, Highlands and Islands, Scotland
Attraction Type: Village
Location: On a minor road off the A851 about 7 miles south of Broadford. Parking near the harbour.
Location map
OS: NG700122
Photo Credit: David Ross and Britain Express

Armadale Castle Gardens and Museum of the Isles - 6.8 miles (Museum)

Nearby accommodation is calculated 'as the crow flies' from Isleornsay. 'Nearest' may involve a long drive up and down glens or, if you are near the coast, may include a ferry ride! Please check the property map to make sure the location is right for you.

More self catering near Isleornsay, Skye

Thistles on Skye - 1 miles
Isleornsay, Highlands and Islands
From: £170.00