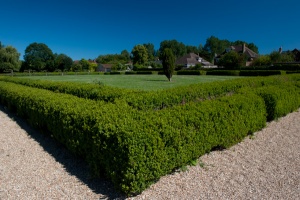 Roman Gardens
The earliest English gardens that we know of were planted by the Roman conquerors of Britain in the 1st century AD. The Roman gardens that we know the most about are those of the large villas and palaces. The best example of the latter is probably Fishbourne Roman Palace in Sussex, where an early garden has been partly reconstructed.

Fishbourne shows a carefully symmetrical formal planting of low box hedges split by gravelled walks. The hedges are punctuated by small niches which probably held ornaments like statues, urns, or garden seats. The formal garden near the house gave way to a landscaped green space leading down to the waterside below. There is also a small kitchen garden which is planted with fruits and vegetables common in Roman Britain.

We know very little about the gardens of Anglo-Saxon England, which is another way of saying that the warlike Anglo-Saxons probably did not hold gardening to be important.

Monastic Gardens
It was not until the Middle Ages that gardens once more became important in British life. Monasteries had both kitchen gardens and herb gardens to provide the practicalities of food and medicine. [For a look at the role of herbs in monastic life, read one of the excellent Brother Cadfael mysteries by Ellis Peters]. The monastery cloister provided an open green space surrounded by covered walks, generally with a well, or fountain at the centre.

Castles sometimes made room for small courtyard gardens, with paths through raised flower beds. Other common features of medieval castle gardens include turf seats and high mounds, or mounts, which provided a view over the castle walls.

Garden styles at a glance

As castles gave way to fortified manor houses in the later medieval period, the garden became a simple green space surrounded by hedges or fences. Games such as bowls or tennis took place on the lawn.

The next stage of the English garden came after the Reformation. Many landowners enclosed common land to create parks for keeping deer or cattle. This 'natural' landscape gave way to formal gardens near the house, still sheltered from the outside world by hedges or walls.

Tudor Gardens
The Tudors followed Italian influence in creating gardens which mirrored the alignment of the house, creating a harmony of line and proportion that had been missing in the Medieval period. For the first time since the Romans left, sundials and statues were once more popular garden ornaments.

But the most prominent contribution of the Tudors to gardening was the knot garden. Knots were intricate patterns of lawn hedges, usually of box, intended to be viewed from the mount, or raised walks. The spaces between the hedges were often filled with flowers, shrubs, or herbs. 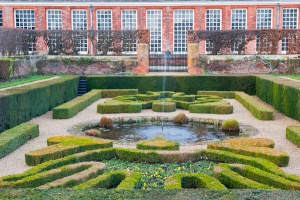 No Tudor gardens have survived intact, but some of the best examples still remaining can be glimpsed at Haddon Hall (Derbyshire), Montacute House (Somerset), and Hampton Court Palace (near London).

The latter has reconstructions of Tudor knot gardens, but these were planted in the early 20th century.

If the Tudors were heavily influenced by Italian ideas the Stuarts were slaves to the French fashion for formal gardens. The chief feature of this French style is a broad avenue sweeping away from the house, flanked by rectangular parterres made of rigidly formal low hedges. The prime survivors of this style can be seen at Blickling Hall (Norfolk), Melbourne Hall (Derbyshire), and Chatsworth House (also Derbyshire).

An offshoot of the French style was provided by the Dutch, who advocated more water, flower bulbs, trees planted in tubs, and topiary. Westbury Court (Gloucestershire) shows this Dutch style. 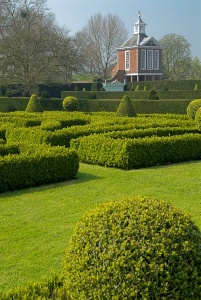 The 18th century saw a swing from Renaissance formality to a more "natural" look. One of the prime movers of this style was the art patron, Lord Burlington. William Kent designed an influential garden for Lord Burlington at Chiswick House based on carefully calculated vistas with temples, statues, and classical ornaments punctuating openings in treed parkland.

English Landscape Gardens
Lines were no longer straight, paths curve and wander, and parterres are replaced by grass. Trees were planted in clusters rather than in straight lines, and rounded lakes replaced the rectangular ponds of the earlier style. The garden became open, a park joining the house to the outside world rather than a carefully nurtured refuge from it.

This natural style begun by Kent evolved into the "landscape garden" under Kent's pupil and son-in-law, Lancelot "Capability" Brown. Brown, whose curious nickname came from his habit of telling prospective clients that their gardens showed "great capabilities", had an enormous effect upon the course of English gardening and architectural style.

The landscape garden made the English country house a part of the fields and farmlands surrounding it. Gone were hedgerows and fences. Gone, too, were formal beds and walks. Grass parkland was brought right up to the doors of the house. The greatest surviving landscape gardens by Capability Brown are at Longleat (Wiltshire), Burghley House (Lincolnshire), Petworth House (West Sussex), and Blenheim Palace (Oxon).

Victorian Gardens
In the Victorian era, the pendulum swung again, to massed beds of flowers (bedding out plants raised in greenhouses), exotic colours, and intricate designs. The most influential gardeners of this period were J.C. Loudon, and later, Joseph Paxton (Chatsworth House and Kew).

The Victorian period also saw a profusion of public gardens and green spaces aimed at bringing culture to the masses. Some of the finest Victorian gardens are public parks, like People's Park in Halifax.

Taste in the late Victorian period varied between formal and the "wild" garden advocated by the influential writer William Robinson. Sometimes the formal and informal looks were combined in the same garden, as at Sissinghurst Castle (Kent), and Hidcote Manor Gardens (Gloucestershire).

Modern Gardens
Gertrude Jekyll is arguably the most influential gardener of 20th century England. She popularized the herbaceous border and planning a garden based on colour schemes. This built on the tradition of the "Cottage garden", with its profusion of flowers wherever space permits, and climbers on trellises and walls. Jekyll saw the house and garden as part of an integral whole, rather than the garden as an afterthought to the building. Her work survives at Marsh Court (Hampshire) and Hestercombe (Somerset).

Gardening has always been a matter of personal taste, and often the outstanding works of previous generations are torn down to make way for the style of the next. For that reason, it is hard to find unaltered examples of historical gardens in England.

Yet, throughout Britain there are gardens great and small, formal and informal, private and public, that illustrate the British passion for creating green, growing spaces of their own. All are different, and all, like their owners and creators, have a distinct personality.

Anne was already pregnant with the future Elizabeth I