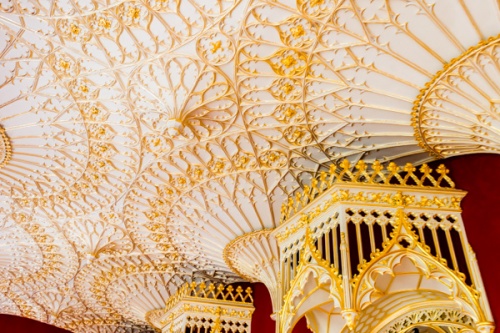 Horace Walpole called Strawberry Hill his "little Gothic castle". A unique, extravagant house, Strawberry Hill set the stage for the Victorian Gothic Revival movement. Originally a small William and Mary house, it was transformed by Walpole over the period 1747 to 1792 into a magical medieval extravaganza of turrets, arches, battlements, and antiquities. The furnishings are as unusual as the architecture, featuring Walpole's curious collections of art, furniture, and historical prints.

Horace Walpole (1717-1779) was the son of Sir Robert Walpole, the first official Prime Minister in English history. He was also a writer and well-known figure in fashionable London society. In 1747 the younger Walpole took out a lease on Chopp'd Straw Hall in Twickenham, on the north bank of the Thames. The Hall was built in 1698 as a rather modest pair of cottages. Two years later he bought the freehold outright and proceeded to transform the Hall into something quite extraordinary. 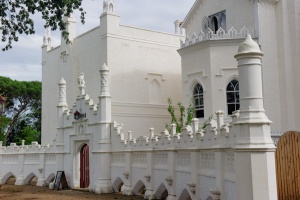 Walpole created his new house in a fantasy Gothick style. He was not the first to harken back to the medieval Gothic look; William Kent had already done something similar at Esher Palace and Hampton Court. But no one had ever done anything quite like Walpole.

He extended the original house westward, but in a piecemeal manner, adding a bit here and there, to create something quite striking; a fantasy villa of turrets, pinnacles, and Gothick invention, a castellated palace in white stucco. In so doing he set a new fashion for richly decorated houses, a place at once perfect for entertaining, and for the creative writing he enjoyed.

Walpole drew inspiration from real Gothic designs that he had visited or seen in prints, basing his new design on the symmetry and extravagant architecture of medieval cathedrals and screens. Everything was a blank canvas for Gothic interpretation, from fireplaces to chimney pieces, ceilings to doors, dark passages and brightly gilded rooms. Poet Thomas Gray described the result as 'all Gothicism, gold, and looking glass'. Strawberry Hill interiors swing wildly between dark and gloomy seriousness and glittering gold frivolity. 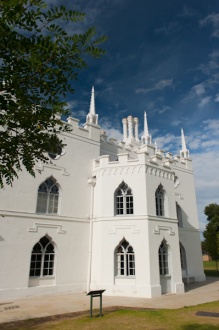 Walpole provided the inspiration, indeed, he never stopped developing his Gothic vision throughout his life, but he employed a number of architects to help him create the finished product. But not only did he call on architects of practical experience, he called upon every man of taste and erudition of his acquaintance. He gathered together a coterie of friends to form a 'committee of taste', an advisory board to help him create his vision. This Committee of Taste was drawn from all walks of life, from country squires to scholars of antiquity, led by his friend John Chute, who had himself built a grand family home at The Vyne, Hampshire (National Trust).

One of the first major features of Walpole's new house was a staircase hall, designed by Richard Bentley and modelled loosely on Prince Arthur's tomb in Worcester Cathedral. John Chute helped design the library block and the Gothick bookcases, which are modelled after side doors at Old St Paul's Cathedral.

Between 1758 and Walpole's death in 1779 he kept adding more rooms. Among these later showpiece rooms is the Holbein Chamber, with a chimneypiece and screen inspired by Rouen Cathedral. Under this room is a dimly lit and atmospheric cloister, the first of Walpole's loosely religious-themed rooms.

But by far the most stunning chamber in the house is the Gallery, a glittering extravaganza of gilded vaulting and mirrors, fine art and exquisite detail. The vaulting is rather obviously modelled after that in Henry VII's Chapel at Westminster Abbey. Leading off from the gallery is an astonishing Tribune, a star-shaped room based on the chapter house at York Minster. The northernmost room is the Round Tower, with a ceiling by Robert Adam. 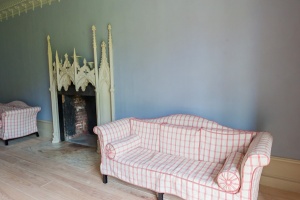 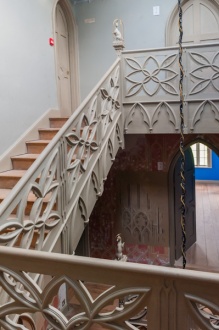 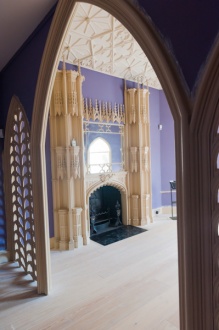 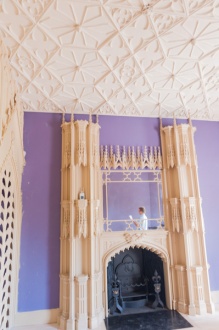 Walpole did not confine his attentions to the house. He put a lot of attention into the grounds, but unfortunately, much of his landscaping was swept away during the following centuries. The only major feature to survive is the Chapel in the Woods, designed by Chute in 1772, and built by Thomas Gayfere, Master Mason to Westminster Abbey. Both the chapel and the Tribune in the house have been made into consecrated chapels by St Mary's College, a Catholic training school now occupying part of the Strawberry Hill estate.

Strawberry Hill became a tourist attraction during Walpole's own lifetime. He was happy to have visitors, but set strict limits; no more than 4 people were allowed to view the house daily, and no children were allowed. He did not show ordinary tourists around the house; that was a task allotted to his housekeeper.

It was here at Strawberry Hill that Walpole wrote the first real 'Gothic' novel, The Castle of Otranto. The story goes that he awoke from a dream one night, and in his half-awake state he imagined that he saw a giant fist in armour on the staircase.

His vivid imagination supplied the rest, and the resulting Gothic tale was printed on a private printing press at Strawberry Hill. The story provided the inspiration for later writers like Mary Shelley. author of Frankenstein, and laid down the blueprint for every Gothic novel written since.

Oh, my! I've visited most of the great historic houses in Britain, so I'm used to opulent surroundings, but nothing could have prepared me for Strawberry Hill House. Admission is by timed ticket, so our family enjoyed the gardens while waiting for our allotted time. Our guide gave us an introductory talk, then we watched a short video on Walpole and the house. We had to put on protective slippers to preserve the delicate original floors, then we were shown around the ground floor.

My primary impression of this area is one of dark passages and dim landings, but when we climbed the stairs to the first floor everything changed and we were transported into a glittering, otherworldly fantasy, a riot of colour and exquisite furnishings unlike anything else. I hope my photos can convey some of this amazing architecture, for mere words are simply not sufficient.

Strawberry Hill is simply stunning, an outstanding piece of 18th-century fantasy that influenced a generation. Over-the-top? Absolutely. Extravagant? Yes. Garish? Perhaps, depending on your tastes. Strawberry Hill House is all of these things, and it is utterly, utterly superb. 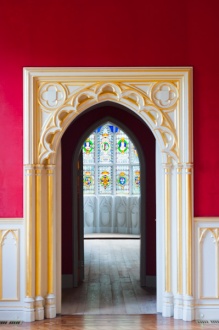 Doorway to Round Room 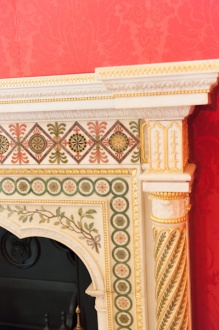 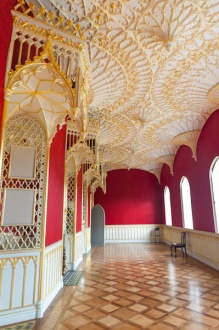 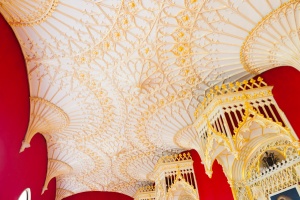 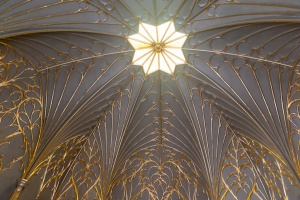 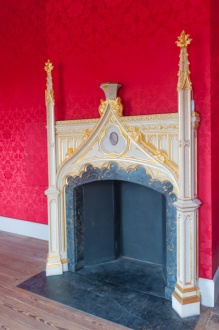 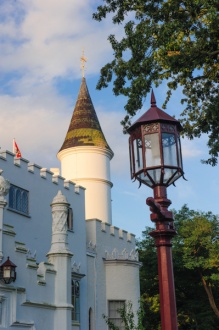 The house exterior at dawn 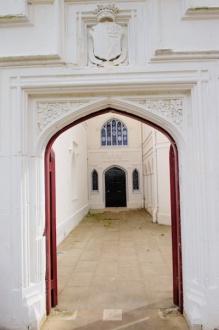 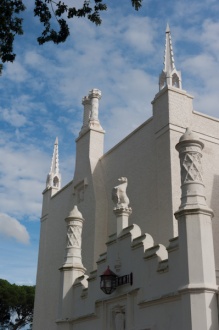 Pinnacles and turrets
on the house exterior 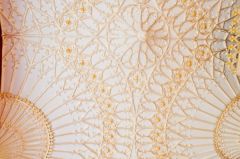 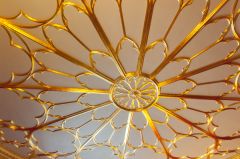