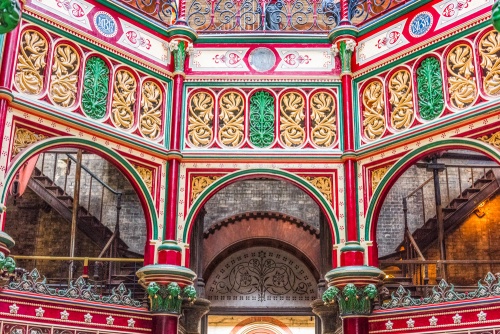 The Crossness Pumping Station is a Victorian masterpiece of engineering and architecture, built by Sir Joseph Bazalgette to deal with London's sewage. The pumping station opened in 1865 and was operational until the 1950s. This extraordinary 19th-century complex of buildings has now been restored by enthusiastic volunteers.

Until the middle of the 19th century, London's sewers emptied directly into the River Thames. No one understood the connection between unsanitary conditions and the spread of disease, and London's burgeoning population made outbreaks of disease inevitable. Between 1831 and 1853 there were three deadly outbreaks of cholera, causing over 30,000 deaths.

The scale of the disaster slowly dawned on politicians. In 1848 a law required all cesspits and drains to be connected to sewers, but that didn't deal with what happened to the sewage next. 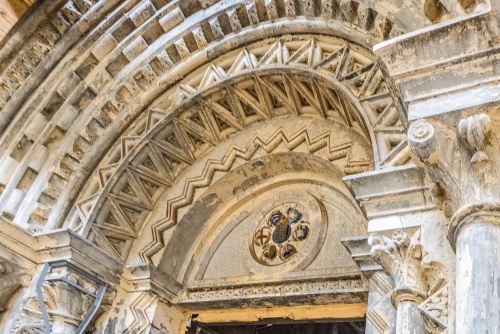 Politicians continued to drag their feet and seemed unable to reach any kind of consensus over how to deal with the growing sewage problem. Pollution built up in the River Thames to an alarming degree, and still nothing was done. Then in 1858, a spell of unusually warm weather caused the polluted river to smell so badly that MPs were almost driven from Parliament by the putrid odour.

The Great Stink was the final straw. Parliament passed the Metropolis Management Amendment which gave the green light to Joseph Bazalgette's ambitious 'intercepting sewage system'. This consisted of 80 miles of covered tunnels which 'intercepted' smaller sewers before they reached the River Thames.

Bazalgette's innovative system involved two sewers, one on the north bank of the Thames and one on the south. The Crossness Pumping Station is at the southern outfall of the tunnels. 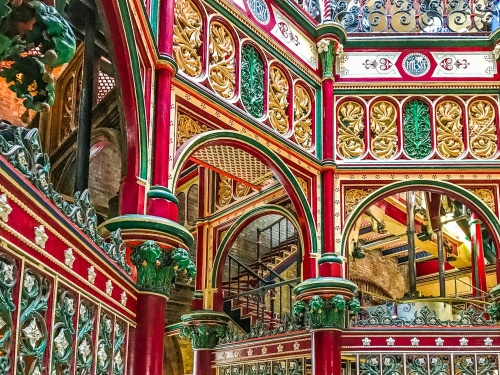 Inside the engine house

The sewers would pump raw sewage east, away from the city centre, at the same time allowing clean water into the river. The sewage was stored in a covered reservoir before being released on the ebb tide of the River Thames, which would eventually carry the sewage out to sea.

It took a disaster to make authorities realise that dumping raw untreated sewage into the Thames was a bad idea. On 3 September 1878 the pleasure steamer Princess Alice collided with a coal barge off Tripcock Point, west of Woolwich.

The Princess Alice was carrying around 700 holidaymakers home from a day trip to the Kent seaside. Within minutes of the collision the Princess Alice sank. Around 650 people died, many of them from breathing in toxic sewage waste as they tried to survive in the filthy water.

The Princess Alice disaster prompted authorities to develop a new system of dealing with sewage. In this 'settlement and separation' approach, sewage settled in two large channels which separated solid from liquid waste. Liquid waste was still dumped into the river but solid waste was carried in special Sludge Boats out to sea and dumped. 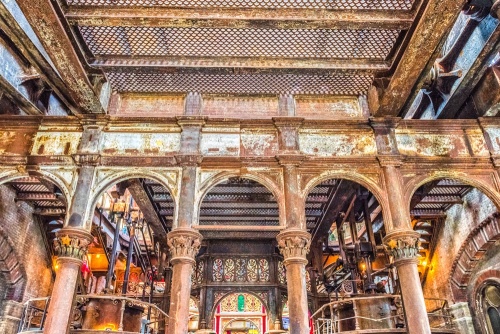 Bazalgette built the Victoria Embankment and the Albert Embankment, with sewers running under the riverside promenades.

The Crossness Pumping Station was an essential part of Bazalgette's scheme. The station opened in 1865 with a boiler house, beam engine house, valve house, fitting shop and workshops. Rising above the pumping station was a 208-foot chimney. Sewage from central London was emptied into a massive 25 million gallon covered reservoir.

Over the next few decades, the pumping station was upgraded and enlarged to hold more boilers and triple expansion engines with reciprocating pumps. The latter were replaced by diesel engines driving centrifugal pumps in 1947. The beam engine house and boiler house were finally made redundant in 1953. 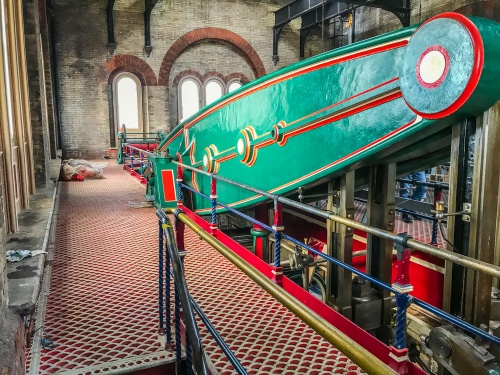 The restored beam engine in operation

There are three Victorian buildings open to the public. At opposite ends of the complex are the Valve House and Fitting House. The Valve House is now an exhibition area with several historic steam engines. Here you can see a quarter flywheel mould, used to cast the huge flywheels in the pump house.

The Fitting House is a machine shop, with a variety of metalworking lathes, presses and other machines and metalworking tools. It was here that the official opening ceremonies for Crossness took place in 1865, in the presence of the Prince of Wales.

In the centre of the site is the Beam Engine House, easily the most interesting of the three buildings. The first section of the building is given over to a cafe and a fascinating exhibit on the history of Crossness, the Great Stink, and the problems involved in dealing with London's sewage. Also on display are several interesting historical toilets and toilet fittings from the Victorian period. 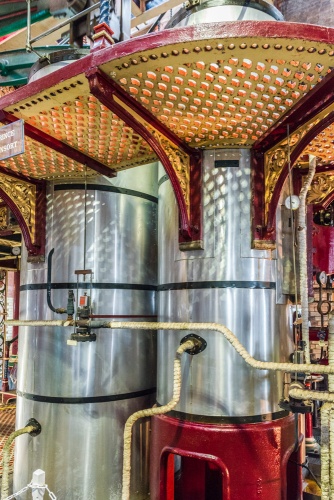 From the exhibition area, you don a hard hat and enter the beam engine house itself.

This is where the magic is; the beam engine house is stunning, a remarkable example of Victorian ironwork and style. The interior of the building has been called a 'cathedral of Victorian ironwork', and that's perhaps understating things. It is stunning. Imagine a richly decorated church, every surface gleaming with bright paint, every column capped with a Romanesque capital, every floor made of semi-circles of painted iron.

It is hard to overstate just how incredible the engine house is. It was 'just' a sewage pumping facility, but the extraordinary architecture is worthy of a state building or a cathedral. 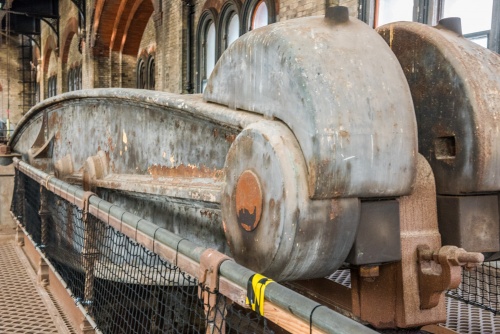 One of the unrestored beams

The Beam Engine House is home to four rotating-beam engines, each named after a member of Queen Victoria's royal family. The engines are named Victoria, Prince Consort, Albert-Edward and Alexandra. These are all single-cylinder engines manufactured by the James Watt Company of Birmingham.

The Prince Consort engine is fully restored and has been in steam regularly since 2002, driving a 47-ton beam with a 52-ton flywheel. The other beam engines are still undergoing restoration.

It is hard to overstate just how impressive the engine house is; the fully restored central section of the building is jaw-dropping. Even the front entrance, now half-hidden within a later extension, is worthy of a cathedral. If this richly decorated sewage pumping station was a stately home it would be among the most visited historic sites in Britain, it is that impressive.

It takes some determination to reach Crossness from central London. The easiest way is to take the South East Rail train from London Bridge Station (platform 1 as of this writing) and alight at Abbey Wood. On days when the pumping engines are in steam, there is a shuttle bus service from the pub immediately beside the station. You can see the current bus schedule on the official Crossness website.

Alternatively, if the engines are not in steam, you can take the BII bus from Abbey Wood (boarding at stop N) to Limestone Walk, followed by a 27-minute walk to the pumping station.

You can also walk from Abbey Wood to the pumping station, a distance of approximately 2.5 miles. The going is level, so you can count on around 45 minutes walking time.

If you are driving, there is a visitor car park at the end of Bazalgette Way (satnav SE2 9AQ).

We visited on a steam day and took the shuttle bus, which was very convenient, but there is a caveat; steam days are very, very popular, and the pumping station was extremely crowded.

It seemed like half of London was there, and they all wanted to photograph the amazing interior of the pump house at the same time. It was hard not to take a photo that included a lot of other people taking photos! Just be forewarned; steam days will be crowded, but it is still a remarkable experience and one we will not forget. 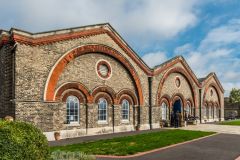 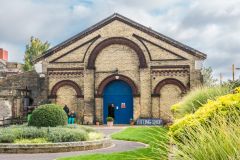 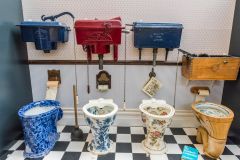 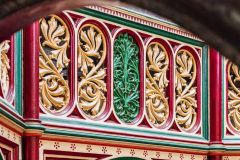 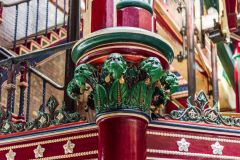 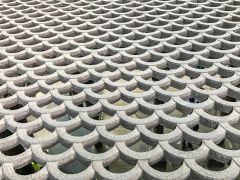