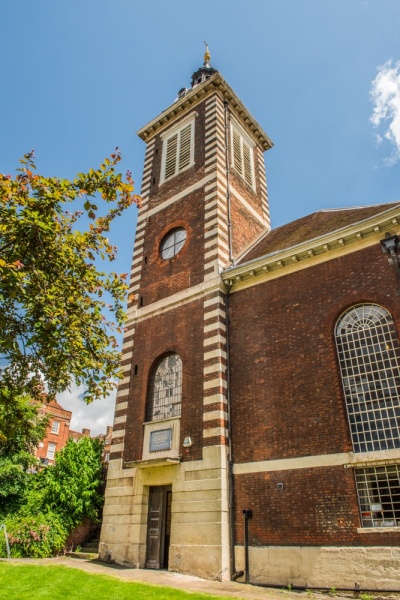 The best-preserved church built by Sir Christopher Wren after the Great Fire of London, St Benet's, Paul's Wharf has been the church of the College of Arms since 1556. It now serves the Welsh Anglican community of London.

The first church on this site dates to 1111, and was dedicated to St Benedict. Over time the name has shortened to 'Benet'. The medieval church was mentioned by Shakespeare in Twelfth Night, when the Clown asks Duke Orsino to give him three, not two coins, and says '...the bells of St Bennet, sir, may put you in mind  one, two, three'.

Ancient Baynard's Castle stood near the church, and it seems very likely that both Lady Jane Grey and Anne Boleyn would have received the last rites at St Benet's before embarking at the castle's watergate for their final, fatal journeys to the Tower of London and execution.

The College of Arms stands across from the church. Since 1556 St Benet's has been the official church for the College, and many masters of arms are buried here.

Perhaps the most famous burial at St Benet's however, is architect Inigo Jones, who was interred here beside his mother and father in 1652. Jones would have recognised the altar, rails, and reredos, all of which were installed in 1640. The original Jones memorial was destroyed in the Great Fire, but a copy of the inscription marks the location of the Jones tomb. 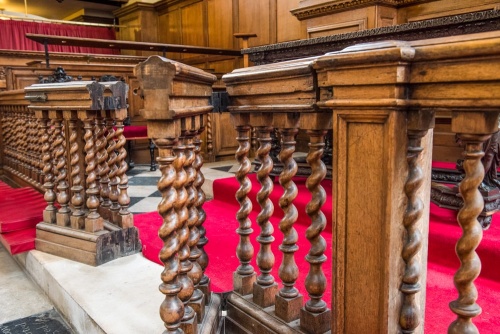 Disaster struck London in 1666 when the Great Fire destroyed most of the city's churches, including St Benet's. Sir Christopher Wren designed a new church in the style of a Dutch country church, with a mix of red and blue bricks decorated with garlands of flowers over the window openings. The striking tower is built on the base of the medieval tower, and is topped by a dome and cupola, above which rises a globe and weathervane. Wren's church opened in 1685.

Charles II had a special door built into the side of the church so he could access a private room when attending services. The Stuart royal arms over the west door shows where the king's gallery chamber was located.

St Benet served as the parish church for the Doctors Commons, a peculiar legal institution which, among other things, was permitted to perform legal marriages without the usual lengthy process of reading banns.

The Doctors Commons became a sort of 'Gretna Green of London' for hasty marriages in the London area, and between 1708-1731 over 13,000 marriages are recorded at St Benet's. Over 1300 of these marriages took place in a single year. The Doctors Commons continued until 1867, but marriages never reached the feverish heights of the early 18th century! 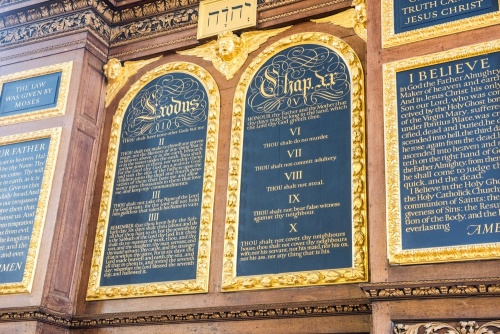 One marriage that wasn't so hasty was that of Charles Howard, 9th Earl of Suffolk, who married Henrietta Howard here in 1706. Howard would become the mistress of Prince George of Hanover, later George II.

One perfectly innocuous marriage was that of author Henry Fielding, who married his second wife here in 1747.

By the late 19th century St Benet's was at risk of being demolished due to falling population in the area. In 1879 Queen Victoria removed the church from the register of churches to be destroyed and granted it to the Welsh Anglican population of London for services in Welsh.

What makes St Benet's so special is that is one of just 4 London churches to escape damage in the Blitz. As a result, it remains as Wren built it, and is probably the best-preserved example of a Wren church left in London.

The interior, with its unusual square plan, boasts the pulpit, altar, and reredos carved by Grinling Gibbons. The marble font and its beautifully carved wooden cover are also original to the Wren interior.

Other highlights include the carved door case with the royal coat of arms above, and sanctuary chairs given by Charles II's Secretary of State, Sir Leoline Jenkins. There is a set of heraldic banners bearing the arms of the 13 College of Arms members, plus the Duke of Norfolk's banner. Set upon the east wall is a 17th-century coat of arms for the College, and on the north wall is the Garter Board, listing every Garter Principal King of Arms since 1398.

St Benet's is open for Sunday services and also one afternoon per week, with volunteer guides from the Friends of City Churches helping visitors get the most out of the experience. We got a chance to talk to two of the volunteer guides during our visit, and they were very enthusiastic about the church and pointed out quite a few historical features that we might otherwise have missed. 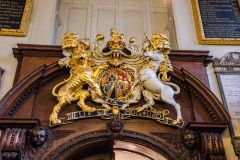 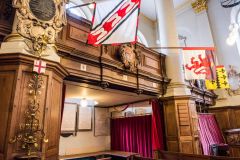 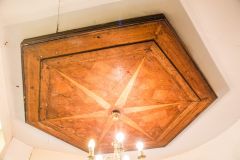 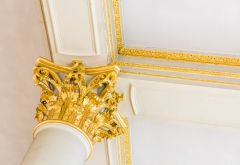