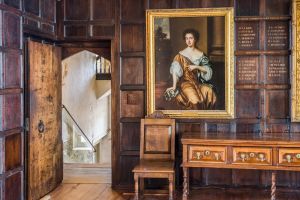 The Great Chamber at Sutton House

A unique survival in London's East End, Sutton House was built in 1535 by Sir Ralph Sadleir, a rising star at the court of Henry VIII. It became home to a succession of merchants, Huguenot silk weavers, Victorian schoolmistresses and Edwardian clergy, and, although altered over the years, remains essentially a Tudor house.
History
Sir Ralph Sadleir entered the household of Thomas Cromwell at the age of just 14. It should come as no surprise that the young Sadleir learned skills in Cromwell's household that would later help him forge a career at court. Cromwell trusted him enough to send him on missions to help implement the Dissolution of the Monasteries, and also on ambassadorial missions to France and Scotland.

A Legal First
It was also at Cromwell's house that Sadleir met his future wife, Ellen Barre, Cromwell's cousin (sometimes called Helen). Ellen had been previously married, but her husband had disappeared while in Ireland and was presumed dead. Ralph and Ellen married, and had children, whereupon Ellen's first husband resurfaced after being missing for several years. This would have made the Sadleir children illegitimate.

In desperation Sir Ralph sought and obtained a private Act of Parliament to declare the first marriage null. This was the first case in England of a marriage being annulled on the grounds of abandonment. Ralph Sadleir rose to become Secretary of State to Henry VIII, and in 1535 he built a new house for his family, which he called 'Bryck Place', because it was built using a relatively new, expensive, and fashionable building material ... bricks. 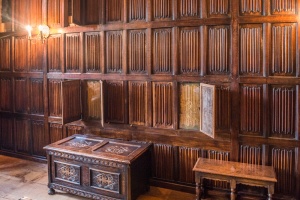 The Linenfold Parlour
The name Sutton Place is actually a mistake. The house stood beside Tan House, home of Thomas Sutton, the founder of Charterhouse School. In 1806 Tan House was torn down to make space for a row of Georgian terraced houses, and the remaining building became known, wrongly, as Sutton House.

In 1751 the house was modified with the addition of a Georgian facade over part of the building, and the interior was divided into two distinct and strikingly different halves, called Milford House and Ivy House. Each operated as a completely separate residence. The house became a boys school, and then Milford House girls' school. During WWII it was used as a watch point for fire wardens, and after the war it was let to the ASTMS union.

In 1982 the derelict house was occupied by squatters, who held rock concerts in the barn and painted the walls with graffiti. The house was saved from decay by a local charity, who restored the building and opened a museum, cafe, gallery, and book shop on the site.

What to See
Sutton House is the oldest house in Hackney and one of the oldest Tudor houses in Greater London. The interiors feature original Tudor oak panelled rooms and ornately carved fireplaces, and an exhibition tells the story of its former occupants. The main rooms have been beautifully restored and show how a leading Tudor family lived. The house has appeared in several TV series, notably 'Most Haunted' (2007) and Terry Pratchett's 'Hogfather' (2006). 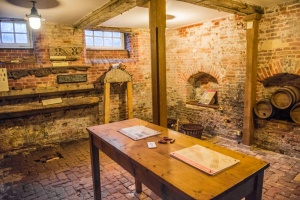 The Cellars
Your visit begins on the ground floor, in The Linenfold Parlour, a chamber lined with exquisite linenfold panelling. Sections of the panelling are hinged, revealing the original 16th century walls underneath. There are models of the Tudor house on display, and a large scale model showing Hackney at the time the house was built.

From the parlour you descend a set of stairs to the cellar, originally used to store beer, wine, and perishable foodstuffs. The cellars are now used for a display on how the house was built, showing brick construction techniques in Tudor times. There are also several pieces of carved wood rescued from the house.

From the cellars you climb up the 17th century Painted Staircase to the first floor. The staircase, as its name suggests, is decorated with painted panels, depicting heraldic designs such as a lion, and extravagant baroque shapes.

The painting was a relatively inexpensive way for the owners to show style and taste, without the cost of paying a master woodworker to carve balusters and other three-dimensional decoration. At the top of the stairs is the Little Chamber, a small panelled room that probably served as a bedroom, possibly by Sir Ralph Sadleir's wife Ellen.

The Great Chamber
The Little Chamber leads directly into the Great Chamber, the centre of the house, a large and luxurious room used for entertaining and meeting guests. When Sutton House was owned by the St John's Church Institute in the early 20th century this large space was used as a billiard room. Over the large stone fireplace is beautifully carved panelling. One section of the panelling is hinged, and you can pull it back to reveal the original Tudor brickwork beneath.

The Great Chamber leads to a small Victorian Study, probably used as a bedroom in Sir Ralph Sadleir's time. A door in the study leads to a garderobe, probably the oldest in East London. The Study is decorated to show what it would have looked like when this section of the house was owned by a wealthy lawyer named Charles Pulley, who lived here for over 40 years in the mid-19th century. 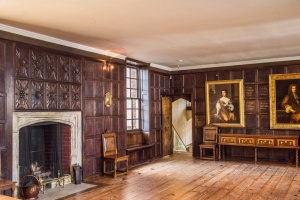 The Great Chamber
The Georgian Parlour
From the Study you descend a back stair to the Georgian Parlour, decorated to show what it would have looked like in the middle of the 18th century, when Sutton House was divided into two sections. The eastern half of the house was occupied by French Huguenot refugees, and we know that in 1800 a family named De Ste Croix lived here with 12 children. Over the fireplace you can make out 16th century graffiti.

Down another flight of stairs you come to the Chapel, part of the original Tudor cellars. In 1914 this part of the cellars was converted into a chapel by the St John at Hackney Church Institute. Curiously for a religious institute, the Chapel was seldom used, as the Institute spent most of energy organising social gatherings, sporting events, plays, and clubs.

Up a set of stairs from the Chapel you find the Tudor Kitchen, decorated to show how a 16th century household ate and prepared food. This room has at times served as a parlour, entry hall, even a lavatory block. A door in the kitchen gives access to the courtyard, where the Tudor flower garden and knot garden would have been. Here you can get a very good look at the mullioned Tudor window, the last remaining 16th century window in the house.

The Squatters's Room
The Blue Room at the top of the house was used by squatters. The National Trust, rather than restore the room to its original Tudor state, kept the squatters' quarters as it was, complete with colourful graffiti, 1980s pop decor, and furnishings. Their philosophy is that the squatters were part of the house's long history, and to properly tell the story of Sutton House their room should be left as intact and representative of its time period, just like the Georgian and Victorian rooms on the floors below. 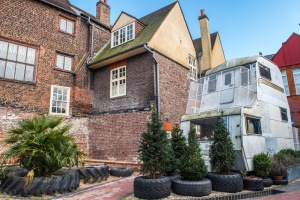 Breaker's Yard
Breakers Yard
Outside the house is once-derelict parcel of land once occupied by a car breaker's yard. The yard has been adapted into a fascinating art installation, with brick paths linking large scale works of art that relate to the former industrial uses of the site. Here you will find a sand-pit made of truck tires, and metal gates incorporating toy cars donated by local celebrities.

The largest artwork is 'The Grange', made by artist Daniel Lobb out of scrap caravans modified with interiors salvaged from stately homes. Nearby is an ice-cream van acting as a shop and refreshment stand. The juxtaposition of the modern art and the historic Tudor building takes a bit of getting used to, but once again it shows how the National Trust is trying to tell the whole story of Sutton House and its environs throughout its long history.

Getting There
The best way to reach Sutton House is by the London Overground network. The closest stations are Hackney Central station or Homerton station on the North London Line. However, the simplest way to reach Hackney from central London is to take the London overground train from Liverpool Street rail station towards Chingford, and stop at Hackney Downs station. From Hackney Downs there is a well-signposted pedestrian walkway to Hackney Central, taking about 5-7 minutes.

From Hackney Central simply cross Amhurst Road and Mare Street and enter St John's Churchyard Gardens. You pass beside the 13th century tower of St John-at-Hackney church, walk through the churchyard gardens to Sutton Place, turn right, and you will see Sutton House in front of you. It is really simple to find (we know, because we got lost leaving the rail station and walked 10 minutes the wrong way before retracing our steps and realising how simple it should have been)! 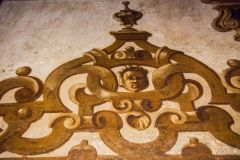 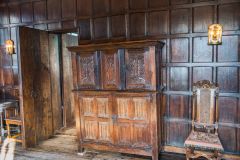 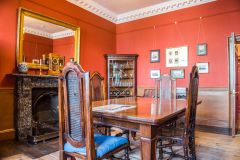 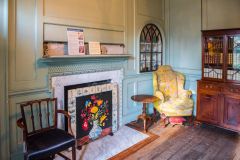 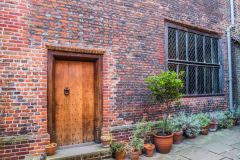 More self catering near Sutton House >>