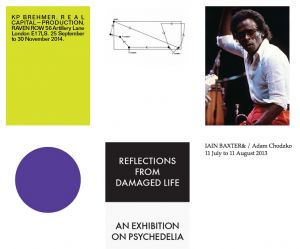 In the Middle Ages, this part of Spitalfields was the site of St Mary Spital, the largest hospital in Europe. Around 1690 a pair of dwellings were constructed at 56 and 58 Artillery Lane. In the 1750s the houses were rebuilt as luxury shops by Huguenot silk merchants.

In 1827 no. 58 was given a new Regency facade. Unfortunately, the prosperity brought by the weaving industry did not last, and the Spitalfields area became an impoverished area, housing workers in the food markets nearby.

The historic houses were damaged by fire in the 1950s and again in the 1970s. They were empty and deteriorating before Alex Sainsbury stepped in to create a gallery space for contemporary art, blending the historic architecture of the 18th-century interiors with a modern exhibition area.

The gallery was launched in 2009 and the first exhibit was 'Please Add to and Return' by New York pop artist Ray Johnson. It takes its name from its location; this section of Artillery Lane was known as Raven Row until 1895.

The ethos of Raven Row is to make art more accessible to a non-specialist audience. The gallery is run on a non-profit basis, and the building houses the non-profit book publisher Four Corners Books.