HERITAGE HIGHLIGHTS:   Medieval hall, the historic seat of the government of the city of London 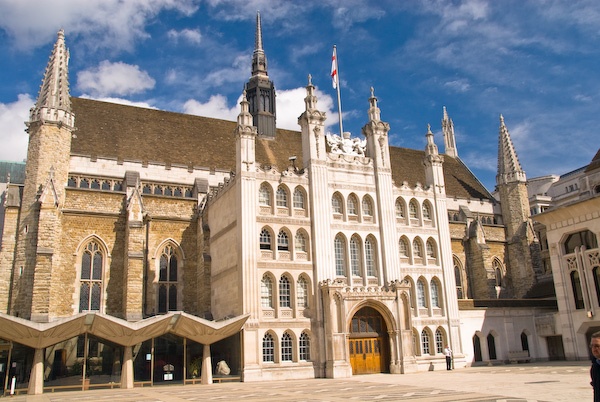 The London Guildhall is the historic headquarters of London's city government. At the centre of this complex of medieval and modern buildings is the 14th-century great hall, built between 1411 and 1440 on the site of an earlier hall which might have been in existence since the reign of Edward the Confessor (1043-1066).

The hall is built over a crypt, the oldest surviving crypt in London The western half of the crypt dates to the 13th century, but documentary evidence suggests that there was a building on this spot as early as 1128. The name 'guildhall' probably comes from the Saxon word 'gild', meaning a payment, so it is very likely that the 'gild hall' was initially a place where citizens of London came to pay their taxes.

In 1411 the earlier building was completely rebuilt by the Lord Mayor of London, Thomas Knoles. Money to rebuild the hall was raised by taxes on the City Companies (such as the Merchant Taylors and Grocers). Henry V waived the right to taxes on the building materials, allowing four boats and four carts to transport the ragstone, freestone, and limestone needed.

A later contribution came from the estate of Dick Whittington, whose executors gave 35 pounds to pave the great hall with Purbeck marble. Stained glass windows in the great hall and the Mayor's Court were emblazoned with Whittington's coat of arms.

City feasts were held annually at the Grocers' Hall or the Merchant Taylors' Hall, but in 1511 Sir John Straw, the serving Lord Mayor, built kitchens for the Guildhall, and all civic feasts were henceforth held here. At 46 metres in length, the Guildhall was the third largest medieval hall in England, after Westminster Hall and the Great Hall of the Archbishop's Palace at Canterbury. 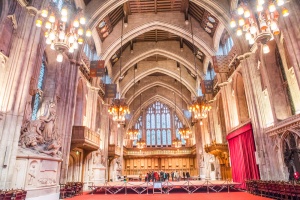 The Guildhall was built to provide a suitable venue for London's city government, for the meetings of the Court of Common Council, and as the seat of the Lord Mayor and Sherriff of London.

In addition, it was used as a place to hold important trials. Among the memorable trials held at the Guildhall are those of Anne Askew (1546), the Earl of Surrey (1546), Lady Jane Grey and her husband, Guildford Dudley (1553), and Archbishop Cranmer (also 1553).

Though the Guildhall was heavily damaged in the Great Fire of 1666, the walls survived, and the interior was rebuilt. How did the Guildhall survive, when so much of London was destroyed in the blaze? One theory is that the hall was framed in solid oak, which was able to resist the worst effects of the fire.

An eyewitness to the Great Fire described the Guildhall as standing amid the flames 'like a bright shining coal, as if it had been a palace of gold, or a great building of burnished brass'. The medieval ceiling had been lost to the fire, and in its place was a flat panelled ceiling thought to have been the work of Sir Christopher Wren.

The Guildhall was altered by Sir George Dance in 1789, and again in 1829, when several large windows were blocked up with what one writer called ''tasteless monuments'.

In 1862 a minstrels gallery was added at the west end, and here can be seen statues of the two mythical giants Gog and Magog, symbols of the city. These giant statues were carved by David Evans to replace earlier statues of 1708 that were destroyed in air raids during World War II.

Though the giants are now generally known as Gog and Magog they were originally Corineus and Gogmagog, brave giants who fought for the liberty of London, which was supposedly founded by the legendary (and completely imaginary) king Brutus.

In a window embrasure you can see brass rods which acted as the official length measurements for one foot, two feet, and a yard. A more recent addition is an official metric metre.

There are several large, imposing statues to 'men of national importance' lining the hall. The choice of who made the grade is intriguing; here you will find memorials to William Pitt (elder and younger), Sir Winston Churchill, Admiral Nelson, and the Duke of Wellington, but also the much less known Willliam Beckford, a former Lord Mayor.

Beckford is depicted in the act of giving a famous speech in front of King George III in which he admonished the king and asked him to dissolve Parliament and dismiss his civil councillors. Beckford was considered a hero by Londoners and a defender of their rights, and so his statue joins those of figures who are better known in British history to the public at large.

Nelson's memorial has been rather unflatteringly described as a 'deplorable mass of stone'. It was sculpted in 1811 by James Smith, at a staggering cost of £4,442 7s 4d.

The nearest tube station is Moorgate, just a few hundred yards away. Entrance to the Guildhall and the adjoining gallery is free. I also recommend that you take a moment to visit the guild church of St Lawrence Jewry, opposite the Guildhall. 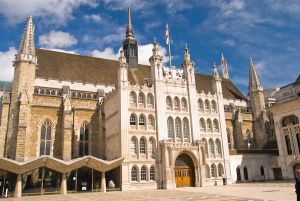 More self catering near London Guildhall >>