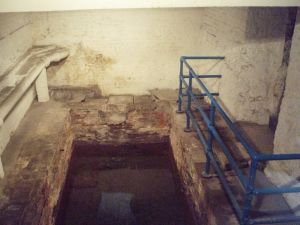 Roman Bath, Strand Lane
Remains of a bathhouse, restored in the 17th century, believed to be Roman (though this is open to some dispute - some authorities consider it to be no earlier than the 17th century!). The bath house is lined with red brick and is contained within an office building, accessible off Surrey Street.

The bath house is rectangular, with a semi-circular end, and was originally fed by a spring. The bathhouse was mentioned by both Dickens in his novel David Copperfield. The bath measures 15'6" long by 6'3" wide and is 4'6" deep. It is lined with bricks measuring 9" thick by 3" wide and 1.75" thick. These measurements are typical of the Tudor period and are generally larger than bricks used in the Roman period.

I find the baths a puzzle. The glimpse you can get through the grilled window is intriguing, but I can see why there is some doubt over whether the baths are actually Roman. The Roman walled city of Londinium was over a mile east of the site, but other Roman finds have been discovered in the area.

The first written record of baths here dates to 1784 when it was simply described as an 'antique bath' in the cellar of a house once belonging to the Earl of Arundel. The first reference to the baths being Roman did not come until 1842 in a book by Charles Knight. Dickens must have read Knight's account, for in David Copperfield he says that Copperfield had 'many cold plunges' in the Old Roman Bath.

One theory suggests that the 'baths' were in fact cisterns built for Arundel House, which were lost when the Arundel estates were sold off in the 16th century. Another, more recent theory, is that the bath was actually a cistern for a fountain in the gardens of Somerset House, built for Anne of Denmark in 1612. The cistern was converted into a plunge-bath by 1776.

A second bath was built beside it and publicised as being constructed by the Earl of Essex in 1588. Over the next century, the second, 'Essex' bath became the primary bath and the 'Roman' bath was simply exhibited to paying visitors as a curiosity. The Essex bath was closed in 1893 and some of the decorations were moved to the Roman bath.

What seems most likely is that in the Victorian period the owner of a cold-water plunge bath on the site decided on a bit of promotion. He put out the word that his spring-fed plunge bath was Roman in origin, and the story took hold.

Admission is by arrangement only with Westminster City Council, and the site is usually open for Heritage Open Days. Luckily, the remains are also visible through a window in the office building at any reasonable hour. You can see enough to get a very good notion of the baths and form your own opinion as to whether they are actually Roman.

It is not easy to find Strand Lane. Follow Surrey Street to number 33 and look for a narrow lane leading around back of the building. Turn right and find 5 Strand Lane. The bath is visible through a basement window.

UPDATE
The above instructions were accurate when I wrote them, but on my last visit, I found locked gates blocking the lane beside 33 Surrey Street. You can see a sign marked 'Roman Baths' beside the lane, with an arrow pointing to the lane, but the gate was chained and padlocked. I'll update this page when I know more about access arrangements.