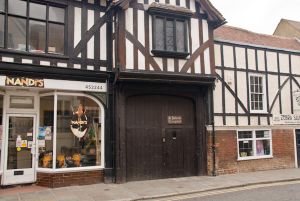 St John the Baptist Hospital
St John the Baptist Hospital is the oldest almshouse in England (though there are others of a similar date in Winchester). The almshouse was established in 1085 by Lanfranc, Archbishop of Canterbury, as a residence for needy 30 men and an equal number of women. The main entrance is through a beautiful timber-framed gatehouse off Northgate.

Amazingly, several of Lanfranc's original buildings are still standing, including the dormitory, chapel, and reredorter (lavatories). Even more remarkable is that after more than 900 years, St John the Baptist is still functioning as an almshouse, providing accommodation to those in need.

Within the 'hospital' is a courtyard around which are arranged a set of six dwelling houses, most of which date to the 15th and 16th centuries. The chapel; is older, dating to the 12th century, with 15th-century additions.

The chapel features an interesting font with a carved Jacobean cover that looks for all the world like a table-leg. It is interesting that the chapel has a font at all - it appears that tenants on the hospital land had the right to baptise their children in their own chapel rather than the parish church.

The kitchen is a particularly interesting building, with a seven-sided stair attached to the exterior wall.

More self catering near St John the Baptist Hospital >>

More bed and breakfasts near St John the Baptist Hospital >>