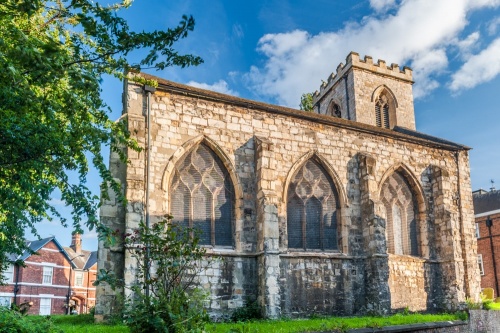 St Denys, Walmgate is one of the oldest churches in central York. It boasts a wonderful collection of medieval glass, from the 12th-15th centuries. 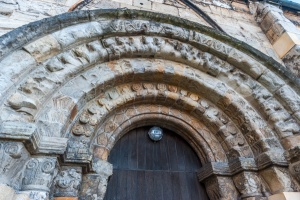 The earliest record of a church here comes from 1154, but it seems likely that there was an earlier Anglo-Danish church on this spot. During excavations in 1846, a Danish 'hogback' grave marker was found, along with a Roman altar stone suggesting that a Roman temple once stood on this site.

Most of the present building is of 14th and 15th-century date and represents only the east end of the original church; imagine, then, how large the medieval building must have been!

There is no doubt what the most impressive feature of St Denys is; seven of the ten windows have medieval stained glass, most from the 14th and 15th centuries. The oldest glass is a pair of 2 12th century roundels, the oldest pieces of glass in York.

Other impressive pieces include a 1452 figure of St Denys, carrying his severed head, perhaps donated by the powerful Percy family, Earls of Northumberland. The Percy's townhouse stood directly opposite the church and the family maintained strong links with the church. Several Percy's are buried at St Denys, most notably the 3rd Earl, who was killed at the Battle of Towton in 1461.

Look for the stained glass panel depicting St John the Baptist wearing a coat made of camel skin. The centre window of the north aisle dates to about 1340 and shows St Margaret slaying a dragon, watched by three members of the Skelton family, who paid for the window. One of the family carries a model of the window itself.

The 15th century north window of the east wall depicts the Biblical Tree of Jesse.

The church was favoured by the Fishmongers' Guild, who ran a busy fish market at nearby Foss Bridge.

The impressive Norman doorway is set in what was originally a window opening. It was inserted here after the nave was shortened in the late 18th century. Another historic feature is the 15th-century roof, with carved heraldic panels. High above the south aisle arches are four 12th century carved heads, and in a side chapel is a very plain 15th-century font.

St Denys has had more than its fair share of misfortune over the years, earning itself the unwelcome moniker 'The Unlucky Church'. The original building was much larger than it is today, but part of it was lost when the nearby King's Fishpool was drained in the late 18th century and the ground subsided. Then a sewer was built nearby and the construction caused more of the church to give way.

The church spire was hit by cannon shot in the Civil War, and by lightning in the 18th century. The spire remarkably stayed upright, but high winds a few years later made it unstable and it was taken down for safety's sake. Finally, the elongated nave was truncated and the transepts were torn down in 1797, giving us the rather squat, oddly proportioned building we see today. 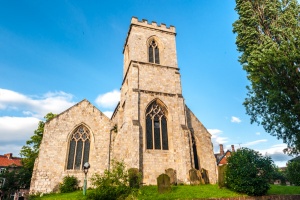 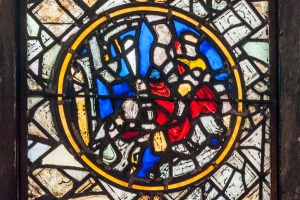 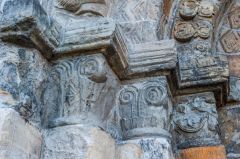 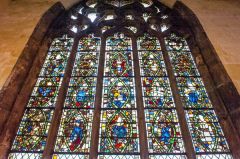 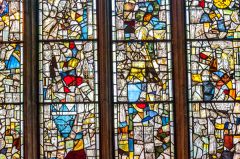