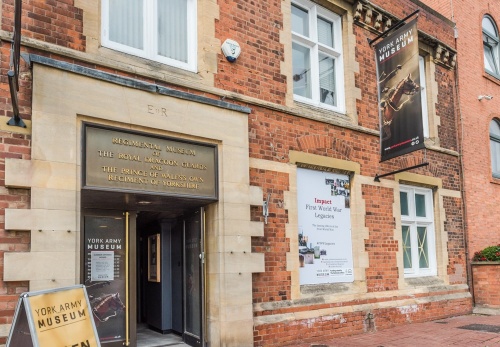 The York Army Museum is one of York's hidden gems, close to the historic city centre and an easy walk from Clifford's Tower, Fairfax House, and the Jorvik Viking Centre yet somehow missed by many of the visitors that flock to these better-known attractions. The museum holds some of the most important regimental collections in Britain, going back to the 17th century.

The museum is focused on the Prince of Wales's Own Regiment of Yorkshire and the Royal Dragoon Guards. Exhibits trace the proud history of the regiments over 300 years and at the same time tell the story of the British Army and its links to Yorkshire and to York.

The museum is divided into six themed areas and offers interactive displays and a temporary exhibition space. Themes include Role Call, Lines of Fire, The Sharp End, Regimental Ties, Soldiering On, and The Yorkshire Soldier. 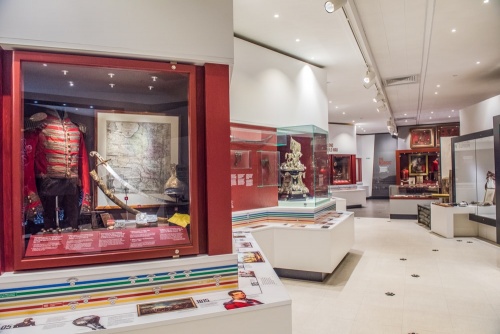 The Role Call gallery explores the differences between Cavalry, Infantry, and Armoured divisions in British Army history. Lines of Fire looks at stories of the regiments in conflicts around the world over the past 300 years, while The Sharp End looks at how a soldier's kit has changed over time. Here you can try your hand at a variety of interactive games.

Regimental Ties recreates the world of the Officers' Mess and what it meant to soldiers and their families, and how they created a sense of camaraderie and community in difficult situations. In Soldiering On you discover in soldiers' own words what life was like in some of the most difficult conflicts in history. The Yorkshire Soldier gallery covers the two regiments in the modern world and explores how the past three centuries have shaped the lives of soldiers today.

The exhibits show how army tactics and equipment have evolved, from brilliant red coats to camouflage uniforms and from swords and muskets to modern weapons. 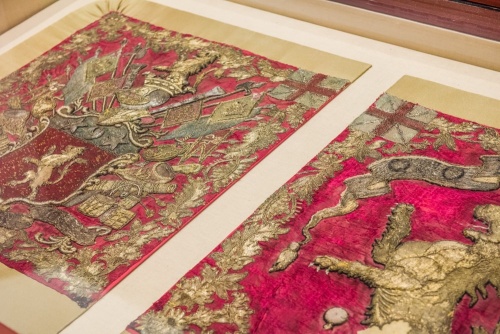 The origin of the name 'Dragoons' goes back to the 17th century when the muskets used by soldiers created a puff of smoke when they were fired. The smoke was thought to look like a dragon breathing fire and smoke, and dragon became 'dragoon'.

The Dragoons is a regiment of cavalry whose origins date back to 1685 when four regiments of British army cavalry were merged into one. It takes its soldiers mainly from Northern Ireland and Yorkshire.

The collections highlight the vital role played by cavalry in the British Army over the centuries. The most important single item on display is the Dettingen Standard, the oldest British cavalry standard in existence. 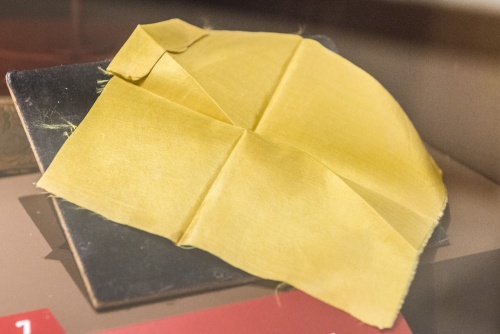 On the surface, the Yorkshire Regiment would appear much more recent than the Dragoons. It was formed in 2006, but it incorporates the former Prince of Wales’s Own Regiment of Yorkshire, the Green Howards, and the Duke of Wellington’s Regiment.

The York Army Museum maintains a database covering some 74,599 World War One memorials across Britain. You can search the records for those mentioned on the memorials by name, service number, battalion, or regiment.

The York Army Museum deserves far more attention than it gets. The exhibits are thought-provoking and moving, poignant and historically fascinating. 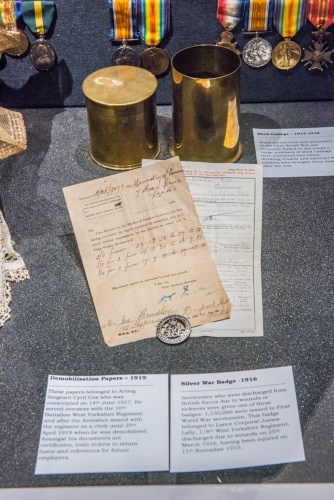 The exhibits are remarkably diverse. There is a pipe presented to a Sergeant Major in the Inniskilling Dragoons after the Battle of Balaclava, WWI wirecutters and grenades, a regimental drum, a modern soldier's kit, and a mechanical arm used for a WWI soldier who had his arm amputated. One of the most poignant exhibits is a letter from a relative of Captain Browne of the Inniskilling Regiment describing injuries the Captain sustained at the Battle of Waterloo.

But for all the reminders of human tragedy, there are many more exhibits taking in the breadth of army life, such as a cricket ball from a match played by the Sergeants' Mess of the 1st Battalion The East Yorkshire Regiment on the summit of Table Mountain, Cape Town in 1890.

Another item that caught my eye was a silver snuff box given by Captain William Powell of the Inniskilling Dragoons to his brother officers on leaving the regiment in 1853. 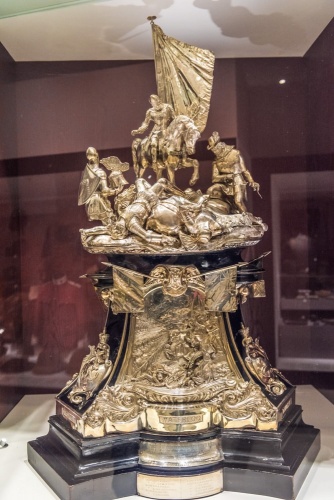 One of the most striking items on display is a silver table centrepiece from the Officers' Mess of the 1st Battalion 14th Regiment of Foot, 1879. The beautifully crafted centrepiece e depicts Edward, Prince of Wales (aka the Black Prince) discovering the body of the King of Bohemia after the Battle of Crecy in 1346.

The Prince of Wales adopted the King's crest of a three feathered plume and the motto 'Ich Dien' (I Serve). In 1876 the 14th Regiment of Foot was given the additional title of the Prince of Wales's Own'. The centrepiece was crafted to celebrate this change. At the base of the battle scene are the Regiment's battle honours.

One of the most historically interesting items is a scrap of yellow silk cut from the curtains of Napoleon's camp bed, which he abandoned after the Battle of Waterloo.

The York Army Museum is on Tower Street, facing Clifford's Tower in the centre of historic York. It is just around the corner from Fairfax House. There is a huge pay and display car park surrounding Clifford's Tower, just a stone's throw from the museum entrance. 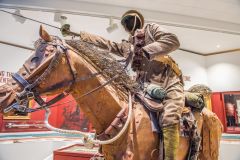 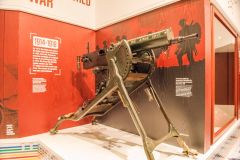 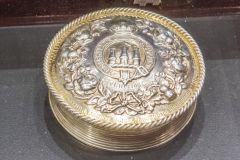 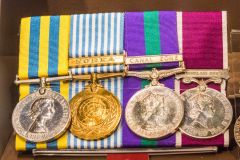 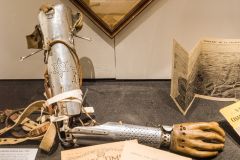