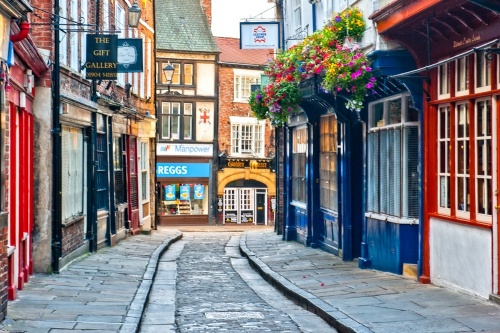 The Shambles is often called Europe's best-preserved medieval street, although the name is also used to collectively refer to the surrounding maze of narrow, twisting lanes and alleys as well. The street itself is mentioned in the Domesday Book, so we know that it has been in continuous existence for over 900 years.

There are 27 listed building in The Shambles, including 10 listed Grade II* and another 17 listed Grade II. Most of the buildings date from the 14th-17th centuries.

The Shambles has the effect of a time machine, transporting you back to the Elizabethan period. The houses that jostle for space along the Shambles project out over the lane in their upper stories, as if trying to meet their neighbours opposite.

The projecting upper storeys had a very practical purpose; they helped keep the rain off goods laid out for sale in the merchants' stalls below. And, of course, they helped provide larger living quarters above the shops without needing to pay for more street frontage. 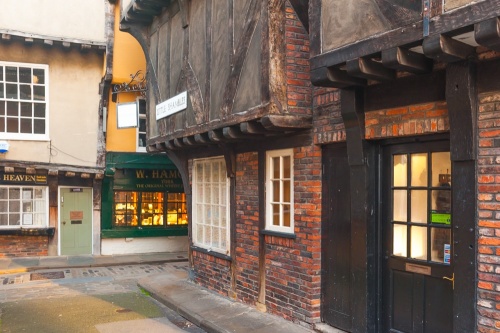 Looking from 'Little Shambles' into the Shambles

The Most Picturesque Street

How picturesque is the Shambles?

The street was named the 'Most Picturesque Street in Britain' in the Google Street View Awards for 2010. Over 11,000 voters selected the Shambles from a shortlist of 51 historic streets selected by a panel of experts.

The name "Shambles" comes from the Saxon "Fleshammels", which means, "the street of the butchers", for it was here that York's butchers had their shops. Notice the wide window sills of the houses; the meat for sale was displayed here. Several former butcher shops still have hooks where meat was hung.

The origin of 'shamble' was the Old English word 'sceamel', which meant a bench or stool. Over time the meaning of the term evolved and was used for the market stall or table where meat and fish were displayed for sale. The plural term 'shambles' became a place where butchers sold their meat. 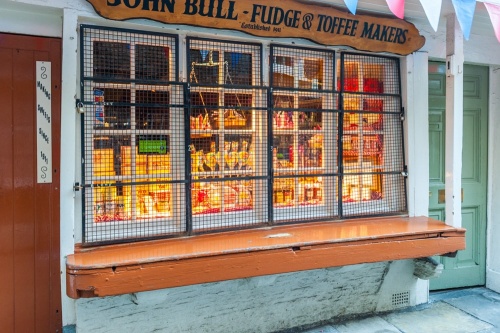 A medieval shop window in the Shambles

But it seems that Shambles is not the original name. Records show that the name Haymongergate was used in 1240, and Marketshire was in use during the 14th century to apply to the entire area of the Shambles and Pavement. A document in 1394 refers to Nedlergate, perhaps a reference to needles made from animal bones. By 1426 the term Great Flesh Shambles was used, and over time this was shortened to Shambles.

The Shambles in York is just one of several 'shambles' remaining in England (albeit the most famous one). There are other Shambles in Whitby (Yorkshire), Worcester (Worcestershire), Chesterfield (Derbyshire), and Chippenham (Wiltshire).

The butcher shops fronting onto the Shambles had slaughterhouses at the rear of the property. Over time, increasing regulation of the food industry meant that butchers were not allowed to maintain the slaughterhouses so close to the shops, and many closed down. 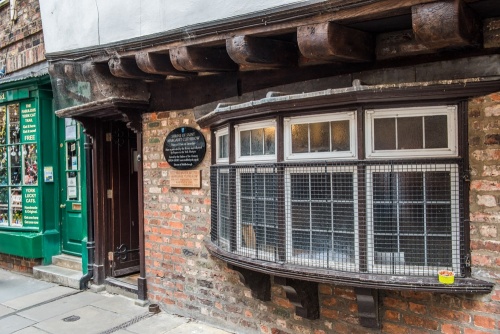 One building of note in the Shambles is No. 35, the shrine of Margaret Clitherow, who at the age of 15 was married to a wealthy butcher with premises on the Shambles. The Clitherows actually lived at Nos. 10-11, on the opposite side of the street and further west.

Clitherow converted to Catholicism in 1574, though her husband remained a Protestant and turned a blind eye to his wife's activities.

She was arrested in 1586 on the charge of harbouring Catholic priests. To make matters worse, she had regular Masses said in her house, and hid clergy vestments there. She might have avoided punishment but she refused to enter a plea, rejecting the authority of the court.

The authorities condemned her to death by pressing (crushing beneath a heavy weight). Margaret Clitherow was canonized in 1970, and her home is now a shrine. 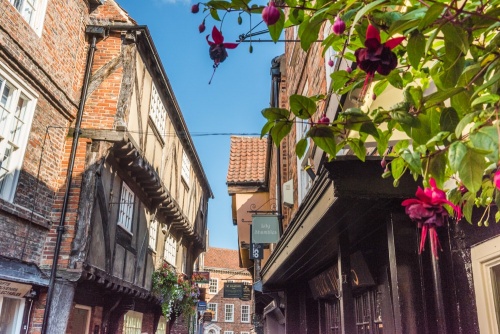 Historic houses leaning towards each other

The picturesque street is thought to have inspired author JK Rowling's 'Diagon Alley' in the popular Harry Potter series of books and films. The link has made York a destination for Harry Potter fans from around the world. Several Harry Potter themed shops have sprung up (dare we say 'magically'?) after the films, including the wonderfully-named 'The Shop That Must Not Be Named'.

There were originally churches at each end of the Shambles. Holy Trinity, King's Square stood at the western end and St Crux, Pavement at the eastern end. Both churches were pulled down, St Crux on 1887 and Holy Trinity in 1936.

The Shambles is very well signposted for pedestrians around the city centre. There are three ways to get there; from King's Square in the west, from the eastern end of Pavement, and a snickleway (a narrow alley) leading north off Shambles Market.

Please be aware that the Shambles gets very crowded during the day, especially in the summer months. It is a magnet for tourists, and at times the press of people can be overwhelming. To get the best from your visit I highly recommend getting there early in the morning before it becomes busy. 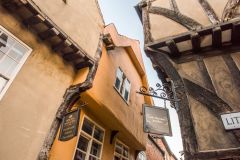 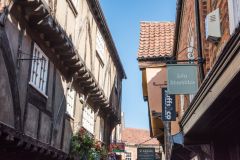 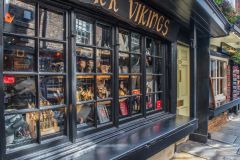 Nearest Accommodation to The Shambles:

More self catering near The Shambles

More Hotels near The Shambles

More bed and breakfasts near The Shambles