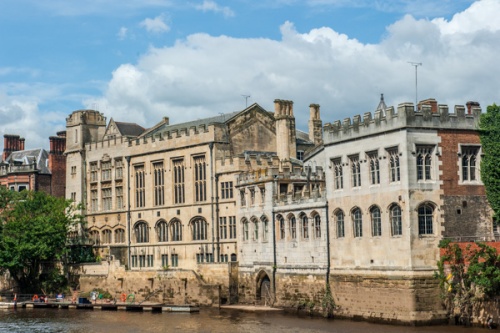 York's medieval Guildhall is an iconic part of the city's long history. The present Guildhall dates to the 15th century but it stands on the site of a much earlier 'common hall' dating to the 13th century. The first reference to a hall on this site comes from a charter dated 1256.

From the 14th to the 17th century, the city made an annual payment of wax to Durham Cathedral Priory as rent for the land.

The 15th-century Guildhall was built as a meeting place for the powerful merchant guilds that effectively controlled the government and business climate of York. The cost of the new building was shared equally between the Corporation of the City of York and the Guild of St Christopher.

Civic accounts for the construction have survived, and show a fascinating entry recording a grant of 3 pennies given to each workman to celebrate laying the foundation stone. The records also show the first council meeting took place in 1459.

The Guild of St Christopher received a grant of land beside the Guildhall and there built their chapel. The legal agreement between the Corporation and the Guild specified that the Guild was allowed to use the hall for 10 days around the feast of St James (25 July) each year and to store wine in the Guildhall cellars.

They were also to receive a share of rent if the cellars were let. The windows were originally protected only with shutters, but some were glazed by the late 15th century. The first stained glass was not installed until around 1680. 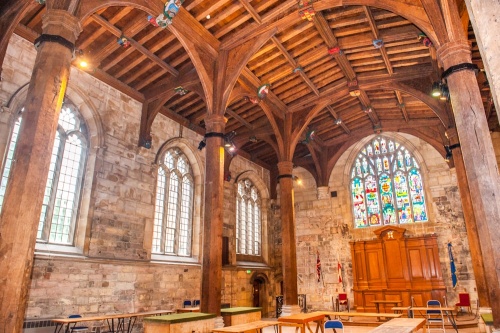 The original plans called for a hall 42 royal ells long (roughly 157 feet), with a cellar at the east end and a second chamber at the west end. There were also subsidiary buildings for a pantry and buttery.

The pantry butted against the hall on the north and was used as a holding cell for prisoners when the assizes court was in session. The west chamber was known as the Justice Room and was used by the city council. The cellar was filled in with earth in 1649 because its damp atmosphere encouraged rot in the hall's timber framing.

Guilds were suppressed during the Reformation, and in 1549 the Corporation took over complete control of the Guildhall.

When the hall was not being used for council meetings it was used for a wide variety of civic and judicial functions, including civic feasts. Richard III was entertained here in a lavish banquet in 1483.

The Guildhall also served as a venue for the Court of Justice. The most famous trial to take place here was that of the Catholic martyr Margaret Clitherow, who was tried for harbouring Catholic priests in 1586. Despite an attempted intervention by Elizabeth I herself, Clitherow was sentenced to death by crushing.

Another historical moment took place in 1647, during the English Civil War. Charles I was being held by the Scots. Parliament offered the Scots 200,000 pounds ransom to hand the monarch over. The money was counted out in the secure surroundings of the Guildhall. 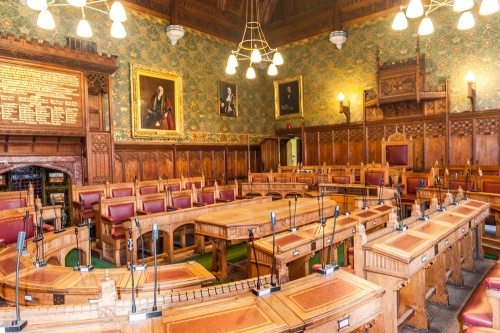 Council meetings no longer take place in the medieval hall but in the beautiful Victorian Council Chamber, built in 1891 on the north side of the Guildhall.

The medieval Guildhall was partially destroyed by bombs in the Second World War. It was rebuilt, incorporating sections of the stone walls of the original hall. The Guildhall is lit by stained glass windows which depict the history of the city of York.

Beneath the Guildhall is Commonhall Lane, a medieval alleyway that now provides a pedestrian passage through the site.

As of this writing plans are underway to transform the historic Guildhall site into a space for civic and public events with a restaurant and state of the art business centre. 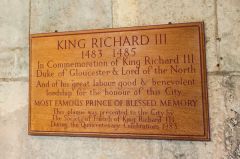 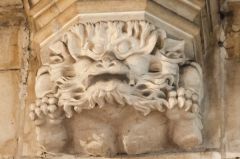 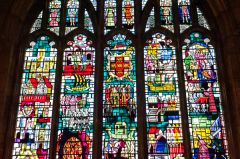 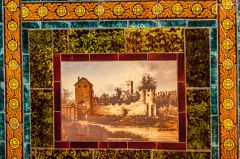 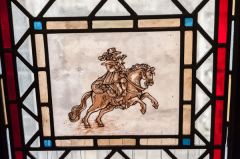