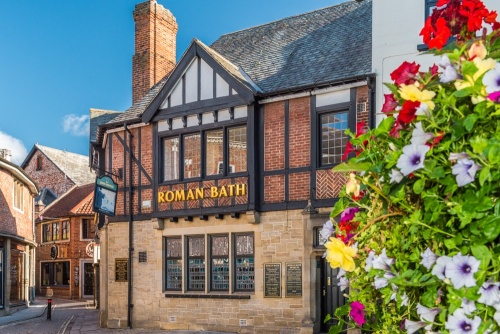 In 1930 renovations to the Mail Coach Inn on St Sampson's, York, revealed the remains of a 4th-century caldarium, or hot bath, from the Roman city of Eboracum. The caldarium, and a neighbouring plunge bath, have been excavated, and visitors can now see the place where Roman soldiers and citizens came to relax.

When the importance of the Roman finds was realised the pub was renamed the Roman Bath.

The Roman baths stretched between St Sampson's Square and Swinegate, an area of roughly 200 square metres. The 1931 excavations revealed just the southern end of the bath complex. Excavations on Swinegate in 1972 found large stone buildings standing up to three metres high. These are probably the northern end of the baths. 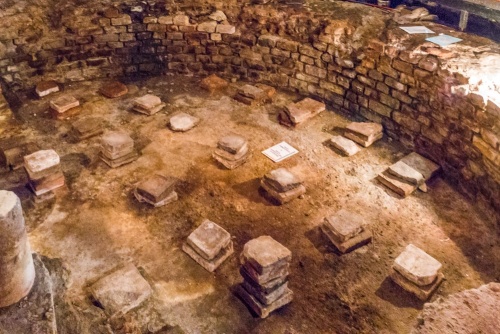 Beneath Swinegate is a Roman sewer system, built to carry away waste water from the baths. The sewer culvert is huge; it is easily large enough to walk through standing up. excavations of the sewer unearthed objects lost by people bathing. These include gold beads, playing counters made of glass and bone, and engraved gemstones from rings.

Roman baths needed an extraordinary amount of timber to feed the furnaces and keep the water at a high temperature. Baths smaller than this one could go through 57 acres of forest per year. Once the furnace was lit it could take up to 36 hours for the heat to reach the desired temperature. The Roman fortress of Eboracum was in a very large wooded area; perhaps this was one reason for the choice of location.

In the late 4th century the cold plunge bath was filled in with blocks of limestone. It seems likely that the bath house had fallen out of use before that time. A reorganisation of the Roman army in Britain during this period may have made the large bath complex unnecessary. 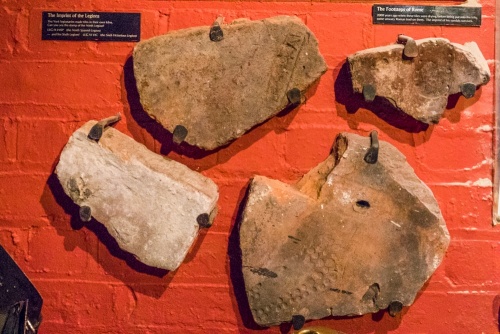 After the departure of the Romans in the early 5th century, some parts of the bath were buried under rubbish, some collapsed, and other parts were destroyed completely.

Only one corner of the Frigidarium survives. While we don't know how large it was originally, the thick foundation walls suggest a very large chamber with a stone-vaulted roof. The base of the Frigarium is made with tiles set in concrete atop a clay base.

There was an outlet hole to drain away excess water into a sewer system underneath the pool. This chamber almost certainly was decorated with colourful wall paintings, though sadly none have survived.

The small museum is 15 feet below ground, accessed through the Roman Bath pub, and shows the remains of the baths along with Roman artefacts and replica objects from everyday life in Eboracum. There are fascinating - and often humorous - facts and figures about Roman life in York scattered about the museum on placards, and visitors can view armour, weapons, and Roman tiles up close. 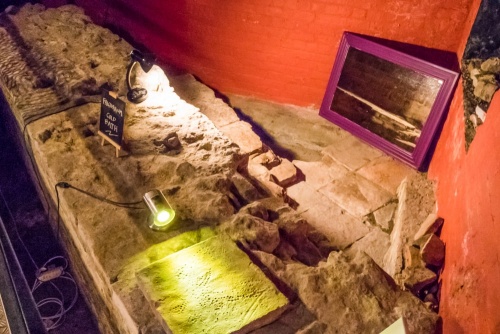 The excavated edge of the Frigidarium

You can see tiles found on the site, some of which clearly show the impact of nails from the sandals of Romans who trod upon them before the tile had hardened after being made. Some tiles show the seal of the 9th Roman legion, who founded the city of Eboracum in 71 AD, and the 6th Legion.

Finds discovered during excavations reveal that the Roman soldiers who frequented the bath house were fond of board games - and probably gambling. Carved objects resembling playing pieces for backgammon and chess were unearthed.

A modern walkway takes visitors above the remains of the bath house. You can look down on the Tepidarium (a warm room heated by a hypocaust system), Caldarium (the hot plunge bath), and the Frigidarium (a cold bath to help close the body's pores).

You can see pillars of 'pilae', tiles that helped support the bath house floors. Air heated by a furnace circulated under the floor, making the chambers steamy and hot like a modern sauna.

There is a 'Dressing Up Corner' where children (and adults) can dress in Roman costumes, including togas and military helmets. See replica Roman clogs; wooden-soled shoes with leather uppers to be worn in the bath house.

The Roman Bath pub is located on the northern side of St Sampson's Square, just off Davygate and Church Street. Get your ticket in the bar and descend the steps down into the world of 4th-century York! 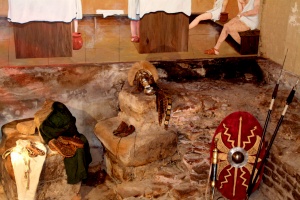 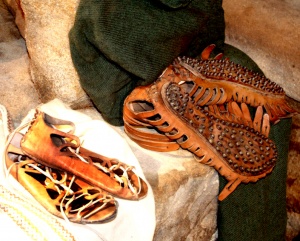 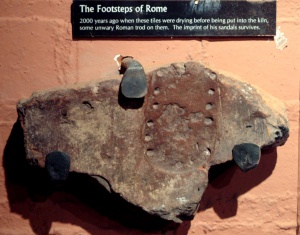 Roman tiles with marks
made by nailed sandals. 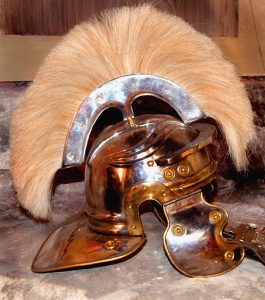 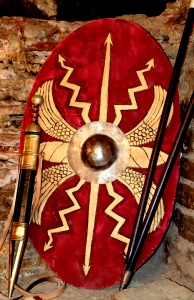 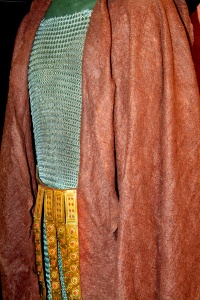