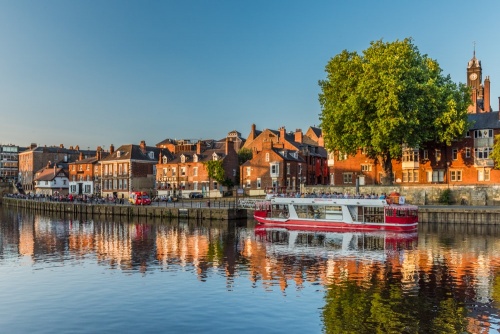 York is located at the confluence of two rivers, the Foss and the Ouse. The smaller Foss joins the Ouse near Skeldergate Bridge. Until 1863, the Ouse Bridge was the only way across the river. The Ouse empties into the Humber Estuary, providing an easy passage from the sea. The Romans took full advantage of the Ouse, and their galleys made York, or Eboracum, as they called it, the premier trading centre in the north of England.

In medieval times the Ouse made York an important textile centre for trade with the European continent, and in Victorian times the river was a highway for distributing coal. Tides were a problem for navigation until the construction of the Naburn lock and weir in 1757.

The River Foss was an essential part of the city's defences for many years. The river formed a marsh and a huge pond, called The King's Fishpool, which were so difficult to penetrate that no walls were needed between the Red Tower and the Layerthorpe Postern. The Foss also fed the moat of York Castle.

The river suffered from industrial development along its banks in the 19th century, but new riverside walks and wildlife sanctuaries have reversed that trend and made it once more an enjoyable place for leisure activities.

Today the rivers are centres for leisure activities ranging from sailing to cruises. Several companies offer boat services, including: