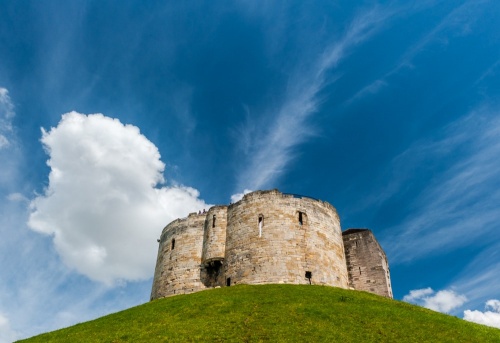 Clifford's Tower is all that remains of historic York Castle, begun in 1068 by William the Conqueror. The tower we see today was built by Henry III beginning in 1245.

When William the Conqueror claimed the throne of England in 1066 he must have anticipated armed resistance to his authority. When a rebellion was launched in the north William reacted with ferocity, laying waste a huge swath of land in a frenzy of destruction known as the Harrying of the North. It was said that after he was finished there was no living thing between the Humber and the River Tweed.

To cement his rule William erected motte and bailey castles as he marched. In 1068 he built a motte and bailey fortification overlooking the River Ouse. The castle had to withstand more rebellions and a Danish attack, but as Norman rule spread the situation in York became more peaceful. The timber and earthwork defences were repaired, but as far as we know they were not rebuilt in stone during the 12th century. 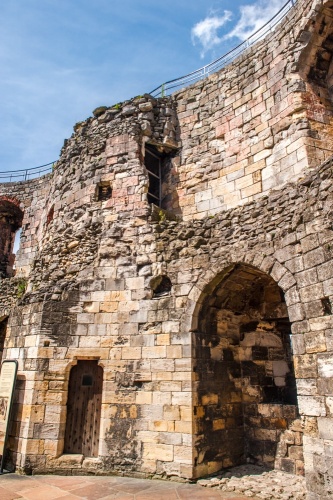 Massacre of the Jews

In the aftermath of the Norman Conquest Jews from Rouen emigrated to England. Some of them practised money-lending, which was forbidden to Christians. The new Norman rulers of England needed money to strengthen their hold on the kingdom, so they protected the Jews. Many settled in York, where a sizeable community developed.

Anti-Semitism grew during the 12th century, fuelled in part by the propaganda of Crusaders, who spread slanderous tales not only against the Muslims who occupied the Holy Land, but against Jews. Stories spread that the Jews practised ritualistic killing of Christian children.

Aside from religious propaganda, there was a practical side to growing anti-Semitism; many English Christians owed money to Jewish moneylenders.

Riots broke out in 1189 after Richard the Lionheart's coronation, and an untrue rumour spread that the new king had ordered English Jews to be massacred.

The Sheriff of York left his post to go on Crusade, and in the power vacuum that followed riots broke out, Jewish houses were burned and looted, and several Jews were killed. Jews led by a man named Joceus took refuge in the royal castle, which stood on the site now occupied by Clifford's Tower.

The castle was attacked by the angry mob, joined by royal soldiers. Knowing that they could not hold out, many of the Jews committed suicide rather than allow themselves to be captured by the bloodthirsty mob outside. More died when the building was set on fire, and the remainder were slaughtered by the mob. Around 150 people are thought to have died in the attack.

After the attack on the castle, the rioters went to York Minster and destroyed records of all debts to the Jews. Each year the castle mound is planted with daffodils, whose six-pointed shape resembles the Star of David, in remembrance of those who died in the massacre. 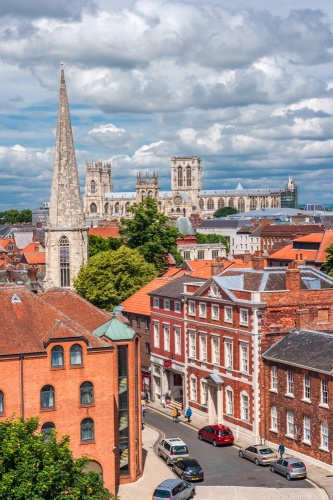 Fairfax House and York Minster
from the castle parapet

Another wooden castle was built to replace the burned building, but this blew down in the 13th century. In 1245 Henry III decided to build a new stone castle on the earlier motte. Construction was directed by 'Master Henry', possibly Henry of Reyns, who served as the master mason on Westminster Abbey. The castle was designed in a quatrefoil shape, influenced by French architecture. Construction was intermittent and the castle was probably not complete until around 1290.

York Castle was a royal fortress but was not used as a royal residence. Instead, it was used as an administrative centre, a prison, storehouse, a royal mint, and for holding court sessions. When England was at war with the Scots the Exchequer moved to York Castle.

In 1322 the tower gained its present name when Roger de Clifford was executed by Edward II for treason. Clifford was hanged in chains from the tower walls, and ever after the building has been popularly known as 'Clifford's Tower'.

The castle was allowed to decay in the Tudor period. Defences were neglected and many castle buildings were used as gaols. In 1596 the gaoler was accused of trying to tear down the decaying tower and sell the stone for lime-burning. This event was the first recorded use of 'Clifford's Tower'. 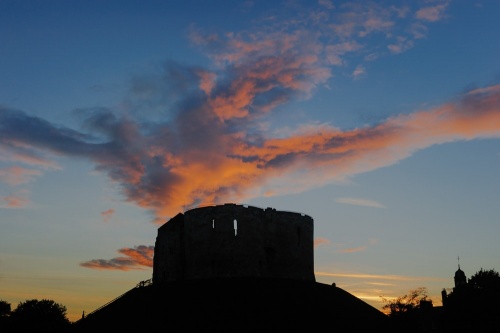 The castle was garrisoned by Royalist soldiers in the Civil War. Storage areas for ammunition were erected and a gun platform built on the roof. York fell to Parliament in 1644 and the castle was occupied by 40-80 Parliamentary soldiers. Part of the structure was destroyed by fire in 1684. The blaze was started by a ceremonial salute in honour of St George's Day.

The castle was occasionally used as a prison. Its most famous inmate was the quaker George Fox who was held here for two nights in 1665. In the 18th-century Clifford's Tower became little more than a romantic folly. The medieval bailey was converted into a prison. That prison was destroyed in 1935, leaving the 13th-century tower atop its mound as the only visible castle remains.

Most of the tower that visitors can see today dates from the 13th century, with some 17th-century additions, notably the Debtor's Prison, Female Prison, and Assize Court. Spiral staircases lead to the walls, and those who make the climb are rewarded by superb views of the city. 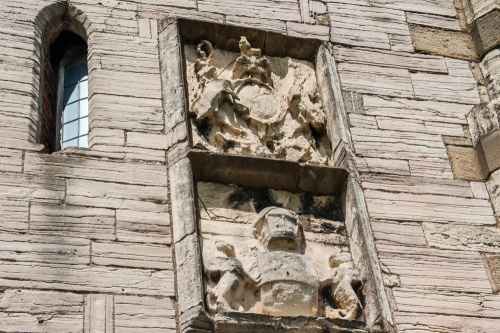 Coats of arms over the tower entrance

Clifford's Tower is on Tower Street, immediately opposite the York Crown Court and a stone's throw from Fairfax House and the York Castle Museum. It is well signposted from the city centre. The castle is surrounded by a huge pay and display parking area. There is a minimal charge for admission, but English Heritage members are admitted for free. 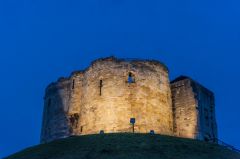 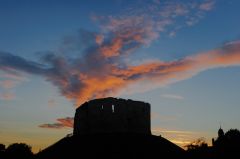 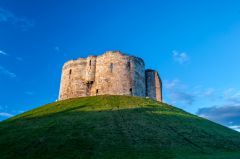 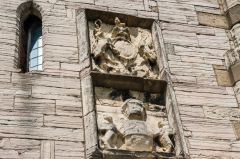 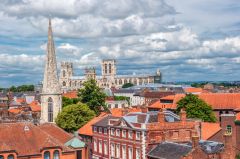 More self catering near Clifford's Tower