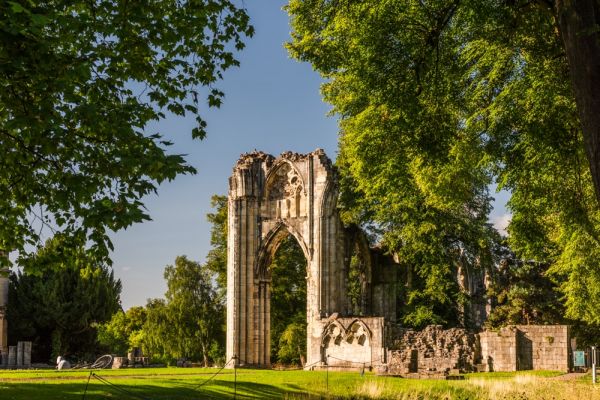 York is dominated by York Minster, but there are a wide variety of other historic churches which deserve visitor attention. Here are just a few.

All Saints North Street
North Street
All Saints possesses a fine collection of original 14th-century stained glass. Two windows of note depict "Corporal acts of Mercy", and the "Pricke of Conscience". Look for the stained glass figure depicted wearing eyeglasses. The church dates back as far as the 12th century, though much of what remains was added in the 14th and 15th centuries. The West tower, 120 feet high, is 15th century. The church was heavily restored after a 1997 fire.
Admission: Free.

All Saints Pavement
High Ousegate
The second All Saints church in York is easily noticed due to its striking octagonal 15th-century lantern tower. In the medieval period a lantern was hung from the tower to act as a beacon for travellers in the Forest of Galtres to the north. The church, first mentioned in the Domesday Book, is the burial place of 39 Lord Mayors. Look for the 12th-century door knocker depicting the Mouth of Hell.

Bar Convent Chapel
17 Blossom Street
This small convent of Catholic sisters was founded in 1686. The splendid neo-classical domed chapel was built in 1766 to designs by Thomas Atkinson. The dome is painted white, with accents in gold. Eight fluted columns support the dome. Joseph Hansom, the inventor of the Hansom cab, was baptised here in 1803. 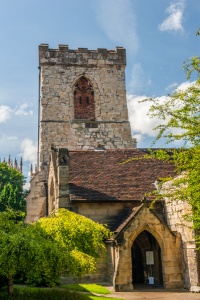 Holy Trinity Goodramgate
Goodramgate
Tucked behind a row of houses said to be among the oldest in England is the 15th century Holy Trinity church. There was a church on this site at the time of the Domesday Book, but most of the present church exterior dates from the 17th and 18th centuries. The red brick entrance was built in 1776. The interior is notable for its irregular box pews, also 17th century, and some fine medieval stained glass. Admission: Free, but donations welcome. Disabled access.

Holy Trinity Micklegate
Micklegate
Just inside the medieval gateway of Micklegate Bar stands this mainly 13th-century church that once served a priory of Benedictine monks. Holy Trinity may have its roots in the 7th century and at the time of the Domesday Book was one of just five churches in northern England exempt from paying fees to the Crown. Highlights include stained glass by CE Kempe and a memorial to Dr John Burton (d 1771), immortalised as Dr Slop in Laurence Sterne's novel 'Tristam Shandy'.

St Denys, Walmgate
St Denys Road, Walmgate
This 12th-century church is known as 'the unlucky church' after a series of mishaps over the centuries, including losing part of the building to subsidence, being struck by lightning, and hit by Civil War cannon fire. Look for 2 roundels of 12th century stained glass, the oldest in York.

St Helen's Stonegate
St Helen's Square
Named for Helen, mother of Constantine, who was proclaimed emperor of Rome here in York. Founded in the 8th century, and worth visiting for its 12th century carved font, 14th-century stained glass, and medieval carving of St Michael.

St Lawrence
Walmgate
Only the 12th-century tower remains of the original St Lawrence, which stands in the leafy churchyard of its Victorian successor. The tower doorway is carved with strange beasts, grotesque faces, and intricate foliage designs. 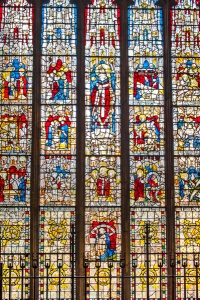 St Martin's Coney Street
Coney Street
Built in 1080 on the site of an earlier Saxon church, and completely rebuilt in the mid-15th century. Look for the superb St Martin's Window of 1437, depicting the life of St Martin of Tours in stained glass.

St Mary Bishophill Junior
Bishophill Junior
Possibly the oldest church in York, with a tower erected in the 10th century using pieces of Roman stone and Anglo-Saxon carved stone fragments. An Anglo-axon cross-shaft stands inside the church. The tower arch may be a Roman gateway arch.

St Mary, Castlegate
Castlegate
Located immediately behind the popular Jorvik Viking Centre, St Mary's was founded around 1020 as a minster, or mother church for the area. Some Saxon stonework remains, but most of the church is the result of 14th and 15th-century rebuilding.

St. Michael-le-Belfry
High Petergate
Just to the south of the Minster is the low, squat shape of St. Michael-le-Belfry. Just inside the entrance is an enlarged copy of the church registry dated April 16, 1570, recording the baptism of Guy Fawkes. The current church was built in 1525-37, replacing an even earlier building. The interior contains an elegant 1702 gilded reredos and 16th century carved benches. Admission: Free. Disabled access.

St Olave's
Marygate
Founded in 1055 by Siward, Earl of Northumberland, and later the first home of St Mary's Abbey. The church formed part of the medieval walls encircling the abbey, and the tower is said to have been used as a gun platform in the 1644 Sige of York.

St Sampson's Centre
3 Church Street
There has been a church here since at least the 11th century but the present church is a Victorian rebuilding of a 14th-century church. St Sampson's is redundant and serves as a social centre for the over-60s. It still boasts its wonderful 15th-century wooden door.

And for good measure, we'll throw in the wonderfully atmospheric ruins of ...

St Mary's Abbey
Museum Gardens
Once one of the most powerful monasteries in the north of England, St Mary's was established in the Norman period and extended in the 13th century. Now the abbey ruins stand in picturesque splendour within the gardens of the Yorkshire Museum.