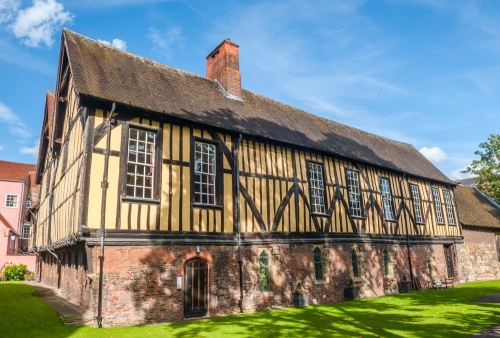 The Merchant Adventurers' Hall is one of the finest remaining examples of a medieval guildhall still in existence in Britain. The Hall was begun in 1357 and completed four years later. The building consists of a great hall for meetings and business, a chapel, and a charity hospital.

A Merchant Adventurer was a medieval entrepreneur, a business person who risked or ‘adventured’ his or her money in overseas trade. These ‘Adventurers’ formed a fraternity, gathering together to worship, do business, and become involved in charitable causes.

Its early date makes the Merchant Adventurers' Hall one of the oldest - and largest - buildings of its type in England. What makes the Hall so special is that under one roof you can see the three functions of a medieval guild at work; business and social events in the great hall, charitable work in the undercroft hospital, and religious life in the chapel.

The ground level of the Hall is built mainly of brick. The bricks were made in a Carmelite Friary located close to Fossgate. These are the first bricks to be made in York since the departure of the Romans. The upper section of the Hall is timber-framed, with beautifully decorated barge boards dating to 1601. 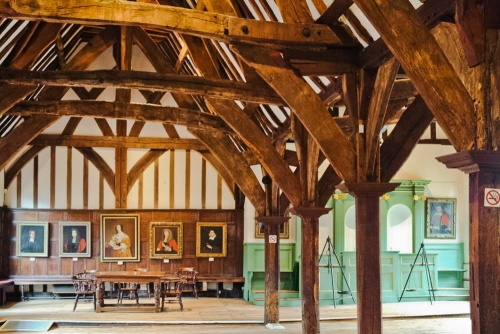 The ceremonial entrance to the Hall precinct on Fossgate bears an ornate coat of arms of the Merchant Adventurers of England. The Company was not granted its own coat of arms until 1969 and until then it used the 'national' coat of arms.

Scattered throughout the Hall are a wealth of historical objects from the Merchant adventurers' collections. Items include paintings, prints, and drawings depicting local scenes, royalty, members of high society in York, and Governors of the Company over the centuries.

There is also a wonderful collection of vernacular furniture. Not all the furniture is old; look for the Governor's Chair, made by Robert 'Mouseman' Thompson of Kilburn and bearing his trademark carved mouse symbol.

Contrast that relatively modern piece of fine furniture with the oldest item in the collection, an oak chest known as the 'Evidence Chest', made in the 1340s.

The Company collection of antique silver and jewellery is also on display. 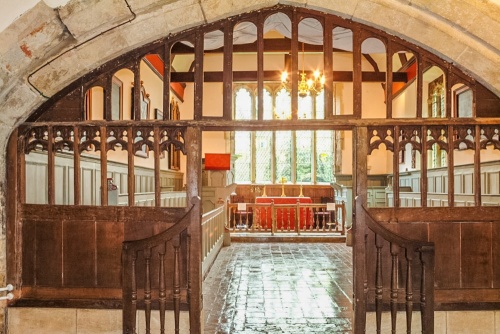 The great hall remains virtually unaltered by the passage of time, save for the 18th-century additions of sash windows and a 16th-century fireplace. The Governor's Stall is a Georgian invention, and the panelling is Elizabethan.

In the undercroft is the hospital, where the poor and destitute of York were cared for until about 1900. The walls of the undercroft are made of brick, one of the earliest examples of brickwork in York.

At the far end of the undercroft is the chapel, rebuilt in 1411 in both brick and stone. The furnishings of the chapel are not original; they date from 1661. 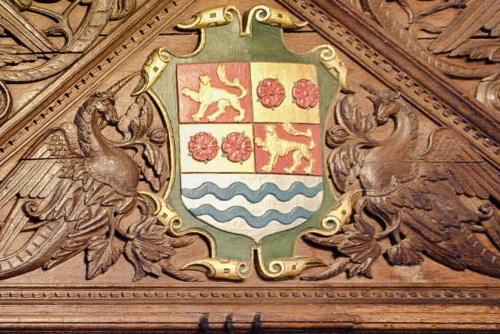 16th-century mantel in the Governor's Parlour

The Great Hall is where the business and social gatherings of the guild were held. The chamber is strikingly wide, built on a double bay plan, with a wonderful timber-framed structure supporting the roof above. Look for black marks on the timber uprights caused by candles used for lighting during the Middle Ages. The green Governor's Stall was moved here during the Georgian period from the Assize Court at York Castle. The fireplace, in a similar green colour to the Governor's Stall, was added in the 16th century. 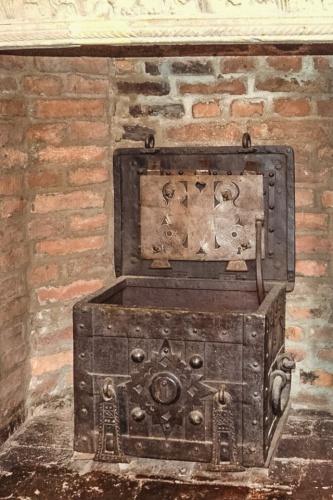 This set of three rooms off the main entry were used for many years as small apartments. They lead to the Governor's Parlour, where business was conducted. Highlights include a 17th-century Nuremberg chest used to keep Company valuables safe. In the third antechamber is The Abbots Chair. This wonderfully carved chair was not necessarily for the use of an abbot but would have been used by important dignitaries.

The Governor's Parlour is a simple room, somewhat overwhelmed by the large table that occupies the centre of the room. The table sits before a quite superb fireplace, with a splendidly carved 16th-century mantel.

The stained glass windows are worth noting. Though modern, they illustrate vividly the international trade efforts of the Company, depicting ships leaving York and arriving at far-off ports. 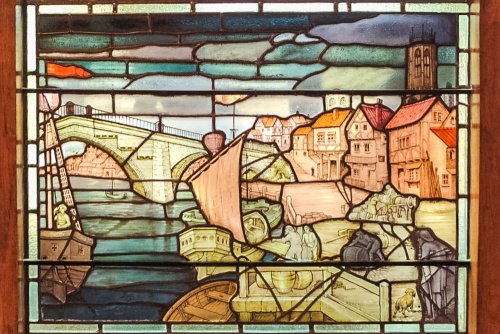 The Undercroft and Chapel

The Undercroft of the Merchant Adventurers' Hall was used from 1373 to 1900 as a hospital for poor men and women. Leading off the Undercroft is the Chapel (built in the same period), so here in one place, the Company attempted to care for both the physical and spiritual needs of its community.

The floor level of the Undercroft has been raised by nearly 1.5 metres (over 4.5 feet) to protect it from flooding. The frame of the arch leading into the Chapel shows marks indicating the height reached by floodwaters over the years. Against the far wall of the Undercroft, a plate of glass set into the floor lets visitors look down to the original floor level.

Beside that plate of glass is a "Pancake Bell" (see photo below). This bell was originally installed at the church of St Crux (now demolished). On Shrove Tuesday the bell was rung at noon to signal that all servants had the rest of the day off and an extra shilling in pay. The afternoon of Shrove Tuesday was often taken up with pancake races and other traditional events, hence the unusual name of the bell. 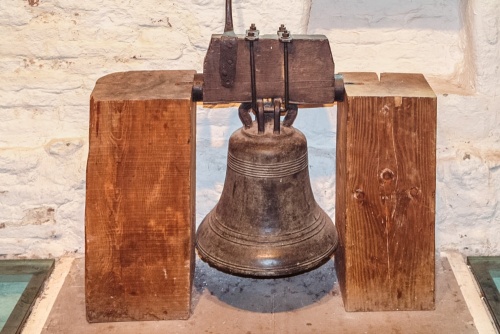 The most noticeable aspect of the Undercroft is the profusion of colourful banners lining the hall. These are banners of the various city guilds, or livery companies, and each banner shows symbols relating to the occupation of the guild it represents. It makes for fascinating entertainment to see if you can guess which medieval guild is represented by each company.

Note: Do not confuse the Merchant Adventurers' Hall with the Merchant Tailor's Hall, a medieval guildhall in the Aldwark area of York. The latter Hall was built by the Fraternity of St John the Baptist in the 14th century and is one of the most architecturally important historical buildings in the city. 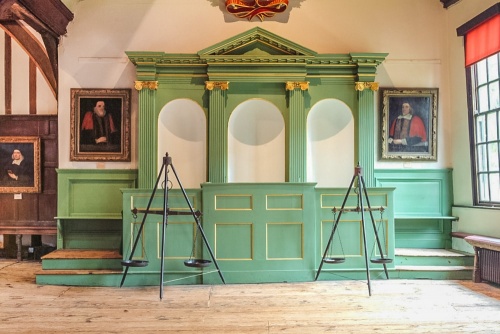 The main entrance to the Merchant Adventurers Hall is on Fossgate and is well signposted from the city centre for pedestrians. You can also access the property from Piccadilly to the south. It is an easy walk from Clifford's Tower. 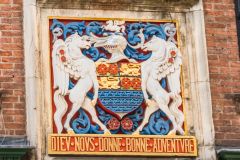 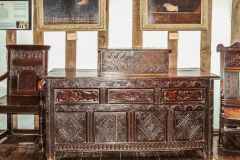 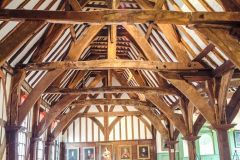