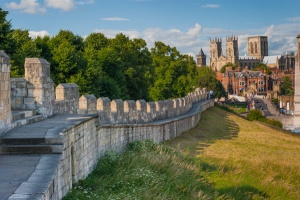 York Minster from the city walls

York has more miles of intact city walls than anywhere else in England, and some sections of the walls date back to Roman times.

When the Romans first came here in the first century AD, they built a military fort on the banks of the River Ouse. The town of Eboracum grew up around the fort, and strong walls were built to enclose both the fort and town. These walls form the basis of the city walls that remain today.

The most notable Roman remain is the Multangular Tower, which stands in the Museum Gardens. The tower was built during the reign of Emperor Severus, who resided in York from 209-211 AD. It has 10 sides and stands almost 30 ft. high. There were once 8 towers, including three on each side of the main entrance to the fort. 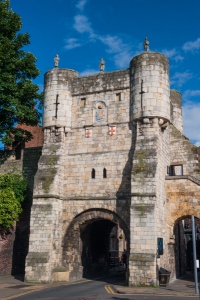 The old Roman walls were in a poor state of repair by the time of the Danish occupation of the city in 867. The Danes restored the walls, and left the Anglo-Saxon Anglian Tower near the Public Library; it is the only such tower remaining in England.

The majority of the wall dates from the 12th to the 14th century, with a few small areas which were restored in the Victorian period.

The four main gateways into the old city stand at Bootham Bar, Monk Bar, Walmgate Bar, and Micklegate Bar. The name "bar" refers to the simple bars which were levelled across the gates to restrict traffic in and out of the city. The bars also acted as toll booths during the medieval period. 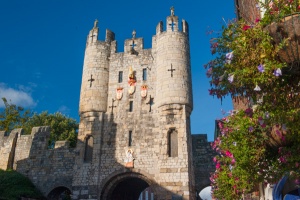 Micklegate Bar
The rectangular gatehouse of Micklegate Bar (the name derives from the Viking "mykill gata" or "geat street") marks the main entrance to the city. It is also the traditional entry point for kings and queen's visiting York. In a ceremony that dates back to Richard II in 1389, monarchs touch the state sword when entering Micklegate Bar.

The gatehouse is four storeys high and contains living quarters on its upper floors. A simple gatehouse was constructed here in the 12th century, but elaborate defences were added in the 14th, with a heavy portcullis and barbican. Within Micklegate Bar is the Henry VII Experience, a fascinating museum dedicated to the history of the Bar and the links between Henry VII and the city of York.

Micklegate Bar was also the place where traitor's heads were displayed to deter rebellion. Some famous (and infamous) heads which decorated the Bar include Henry "Hotspur" Percy (1403), Lord Scrope (1415), Richard, Duke of York (1461), and the Earl of Northumberland (1572). Heads were often left atop the Bar for years. 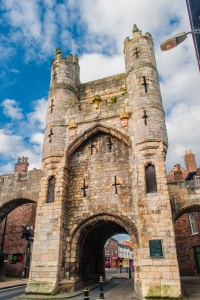 Bootham Bar
Bootham Bar contains some of the earliest medieval stonework in the walls, with the oldest sections dating to the 11th century, though much of what can be seen today is from the 14th and 19th centuries.

Monk Bar
Monk Bar is the most elaborate of the city gates. It consists of a four-story gatehouse which dates from the early 14th century. The gatehouse was designed to stand as a self-contained fortress, with each floor capable of being defended individually.

Monk Bar is now home to the Richard III Museum, where visitors can attend a modern "trial" of Shakespeare's villain and decide for themselves if Richard was the prototypical evil uncle, or a maligned and courageous king. 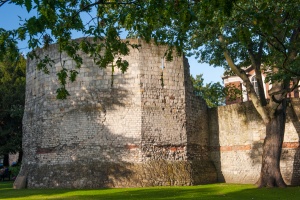 Considerably more of the walls might still exist if it were not for the misplaced efforts of the Corporation of York. In 1800 the corporation applied to parliament for permission to destroy the old walls and gates due to their age and the cost of maintenance. Despite opposition, including that of King George III, the city proceeded to demolish 3 walled forts, four gates, and short sections of the wall. Some sections of the wall have since been repaired.

Walmgate Bar
Walmgate is the only medieval bar to retain its barbican, portcullis, and inner doors. The gate was built in the middle of the 12th century and a barbican added in the 14th century. The Bar was rented out as a dwelling in 1376 for an annual fee of 10 shillings. The gatehouse continued to be used as a residence until 1957. 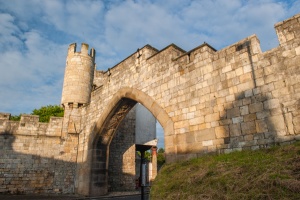 Like many other city gates, the heads of important criminals were displayed over the gateway of Walmgate. One head was that of Robert Hillyard, or 'Hob of Holderness', leader of a 1489 rebellion against taxes.

The gateway was badly damaged during the Civil War siege of 1644. The Parliamentary troops set up guns on Lamel Hill and bombarded Walmgate and the surrounding area. The soldiers dug a mine under the gate and installed explosives, but were stopped when the defenders dug a counter-mine and cut off the Parliamentary tunnel.

Fishergate Bar
One of the lesser-known gates, Fishergate Bar dates to the medieval period. It was burned by an angry mob protesting against increased taxes in 1489 and you can still see scorch marks in the stones of the central arch. In the reigns of Elizabeth I and James I Catholics were imprisoned in the small towers over the Bar, as were lunatics.

Victoria Bar
One of the most recent additions to the city walls is Victoria Bar, created in 1838 to connect Bishophill and Nunnery Lane. As traffic through the arch increased a pair of pedestrian arches were added. During construction, the remains of a 12th-century entrance were discovered.

This is thought to be the Lounelith Gate, whose name means 'hidden' or 'obscure'. Over the central arch is the name of George Hudson, the 'Railway King', who was the acting Lord Mayor of York in 1838 when the gate was built.

Aside from the major gates (bars), here are a few other highlights that you will encounter while walking the walls: 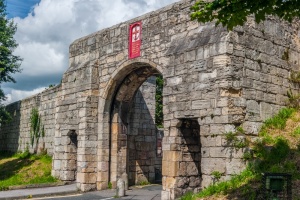 Fishergate Tower
A short stroll from Fishergate Bar brings you to Fishergate Tower, built in 1505 to replace an earlier tower known as Talkan Tower after Robert de Talkan, Lord Mayor of York in 1399. It controlled access to the city through a small gate known as Fishergate Postern, where you can still see the vertical slots where a portcullis was raised and lowered.

Lendal Tower
Hugging the north bank of the River Ouse is this 13th-century tower. A heavy chain was stored inside the tower and ran underwater to Barker Tower on the south bank. Every evening the chain was pulled up to prevent boatmen from entering the city surreptitiously to avoid paying tolls. In 1631 the tower was converted into a water cistern with a pump to supply fresh water throughout the city.

Baile Hill
A short walk across the river from Clifford's Tower brings you to Baile Hill, all that remains of a Norman motte and bailey fortress built by William the Conqueror to quell a rebellion in 1069. It was meant as a counterpart to Clifford's Tower on the opposite bank of the river. These two castles controlled traffic on the River Ouse and kept order in the unruly city. 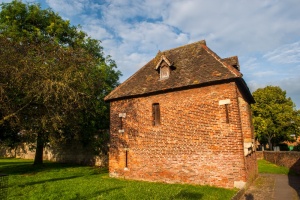 Red Tower
One of the least-visited towers along the city walls is the Red Tower, built in 1490 of red brick - hence the descriptive name. It looks short and squat, more like a small cottage than a watchtower. It was intended to defend the area around the King's Fishpool, a large pond formed by damming the River Foss.

Layerthorpe Bridge
About 700 yards from Red Tower is the site of Layerthorpe Bridge, which allowed wagons to bring goods from the Royal Forest of Galtres and Heworth Moor into the city. The first bridge here was built in 1309 but the two bridges we see today are modern. There are no walls between Red Tower and Layerthorpe because during the medieval period the city wall went right to the River Foss and the King's Fishpool. The lake silted up in the 17th century.

If you choose to walk the walls of York you'll be sure to meet local inhabitants; a recent survey revealed that walking along the city walls is the favourite leisure activity of fully 39% of York residents. As you walk, look for one of the 136 brass pins set into the wall; they help local archaeologists and engineers precisely measure the location of maintenance work.

For more information on the history of the walls, visit the official York City web site.
Another useful link is the Friends of York Walls, a not-for-profit group whose aim is to promote and preserve the historic walls.