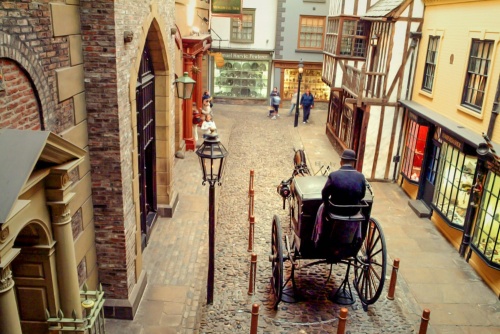 One of the most popular visitor attractions in York is the York Castle Museum, which recreates daily life in England through the past 400 years. The museum is housed in Grade 1 listed 18th-century prison buildings.

The museum centres around two life-sized reconstructions of authentic street scenes. The first is the Victorian Kirkgate (so named after the originator of the museum, the Edwardian doctor, John Kirk). You can wander into shops, see a family at home, and call at the police station.

The second life-sized street is Half Moon Court, depicting daily life in Edwardian York. The "street" is built in the former debtor's prison, and you can visit the old prison cells, some of which house displays of authentic Yorkshire crafts and rural skills.

The museum is housed in two historic buildings; a former debtor's prison and a former women's prison located beside historic Clifford's Tower, all that remains of York Castle. It is the location that gives the museum its name. The main museum building is the former County Gaol and Debtor's Prison, begun in 1701. The building was enlarged in 1824 and converted for use as a museum in 1950. 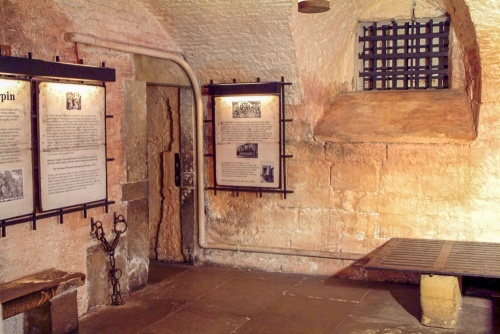 One of the highlights of the historic prison area is the cell where the famous highwayman Dick Turpin spent his last night before execution in 1739. Turpin is just one of eight real prisoners whose lives - and deaths - are explored. Other prisoners include a Luddite protestor, a prisoner who was beaten so badly that he died while incarcerated, and Elizabeth Boardingham, the last woman to be burnt at the stake in Yorkshire.

The Female Prison was built in 1780, altered in 1802, and converted for museum use in 1938. The original prison building echoed the design of the Court House (now the Crown Courts) opposite.

Both the museum buildings are Grade I listed for their heritage value. 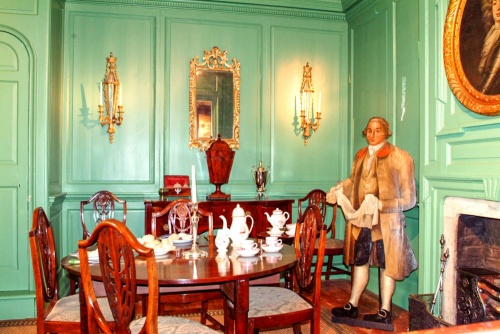 The museum was founded by a physician from Pickering named Dr John Lamplugh Kirk. Over years of travel around rural Yorkshire, Kirk amassed a huge collection of bygones, reminders of a way of life that was rapidly disappearing under a tidal wave of social change. Kirk collected rare and obsolete items from everyday life. He even accepted historic objects as payment for his medical services.

By 1918 Kirk's collection had grown so large that it needed a permanent home - one that was easily accessible to the public. In 1935 Dr Kirk donated his collection to the City of York, but he personally oversaw the creation of every aspect of the new museum, down to the colour of paint used on the museum walls.

Dr Kirk wanted a different kind of a museum, focussed on the objects and displaying them in their historical context. It was a novel idea and one that had never been seriously used in any museum before that time. 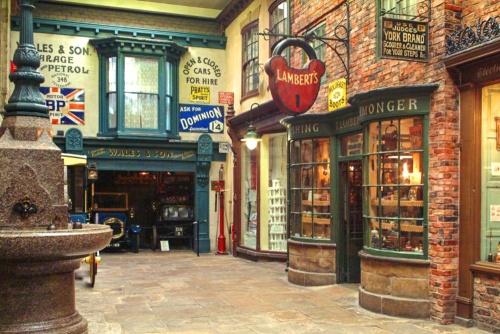 The centrepiece of the new museum was a recreated street scene dubbed 'Kirkgate' in honour of Dr Kirk. Kirkgate created a new style of museum presentation that has since been copied - but never bettered - by museums around the world.

Rather than simply present historical items in display cases as many museums still do, Kirkgate recreated the ambience of a historical street scene from the Victorian era, down to the cobbles on the street. Kirkgate is a place where visitors can step into atmospheric shops and immerse themselves in the nostalgia of a bygone age.

Each shop and each room setting was built to showcase historical objects in their original settings and context and most were named after people who helped Dr Kirk found the museum. Every shop in Kirkgate is modelled after a very real Yorkshire business that was known to operate between 1870 and 1901. Some are still operating and will be recognised by York residents. 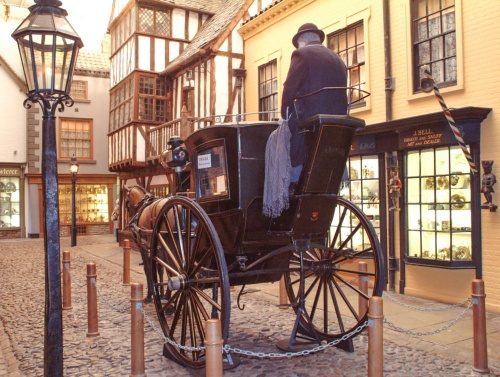 Another view of Kirkgate

The range of shops covers the gamut of Victorian life, from an ironmongers to a taxidermist's shop, a gunsmith to a milliners and an undertakers. Some, like George Britton’s grocers, were geared to a wealthy clientele, while others, like Thomas Ambler’s grocers, catered to the rising middle class.

Pop into the Cocoa Room where you will enjoy a magic lantern show, an entertainment popular in the Victorian period, and meet real York characters like Mary Sessions, a widowed shopkeeper, and Isaac Dickinson, born into poverty, who worked at Terry’s and helped bake a cake for the royal family.

Kirkgate doesn't shy away from the less salubrious aspects of life in Victorian York; turn off Kirkgate onto Rowntree Snicket, an alleyway that shows the poverty-stricken life of the lower classes. The alleyway includes a typical working-class home modelled after the influential survey of York's poor by Seebohm Rowntree, published in 1901.

The museum was designed to transport visitors back in time and immerse them in the feel of a lost age. This is a common approach used by museums today, but in 1938 it was a novel and unusual method of appealing to visitors and making the historical objects come alive. 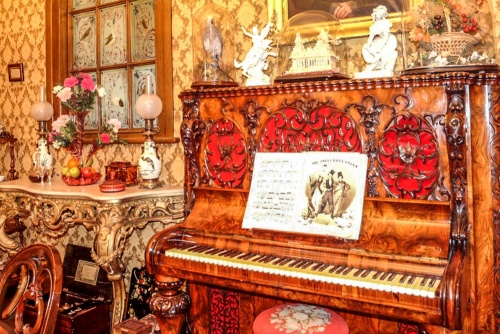 The museum centres around two life-sized reconstructions of authentic street scenes. The first is the Victorian Kirkgate (so named after the originator of the museum, the Edwardian doctor, John Kirk). You can wander into shops, see a family at home, and call at the police station.

The second life-sized street is Half Moon Court, depicting daily life in Edwardian York. The "street" is built in the former debtor's prison, and you can visit the old prison cells, some of which house displays of authentic Yorkshire crafts and rural skills. Don't miss the cell where the famous highwayman Dick Turpin spent his last night before his execution.

The York Castle Museum is home to the Jane Austen costume collection, and extensive social history, and military exhibits (and the children will love the giant dolls houses).

Not all the exhibits explore the distant past; The Sixties gallery recreates the spirit of the Swinging Sixties, with iconic music, fashion, toys, consumer goods, and ordinary household objects. Highlights of The Sixties gallery include a Lambretta scooter, fashion by Mary Quant, a Dansette record player, and of course, Beatles music.

There are so many wonderful historical items on display at the museum that it is very hard to highlight just a few, but we'll try.

One highlight that really stands out is the Percy Panels, carved oak panels from The Percy Inn on Walmgate, once owned by the powerful Percy family, Earls of Northumberland. Two of the panels depict Henry Percy, the 4th Earl, and his wife Maud. Percy was murdered by a mob for his attempt to enforce taxes imposed by Henry VII in 1489.

Another poignant artefact is a tin of Rowntree's cocoa taken by the Arctic explorer Ernest Shackleton on his ill-fated attempt to reach the South Pole in 1908.

One unusual highlight is a collection of hand-made patchwork quilts dating back 300 years. 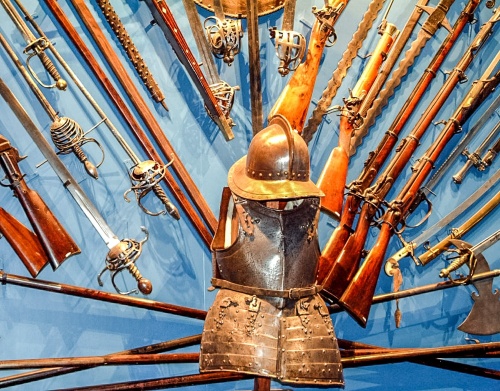 A display of historical weapons

Behind the main museum building is the Raindale Mill, a fully-restored working water mill brought here from Newton-upon-Rawcliffe in the North York Moors. Beside the mill are a cottage garden and a wildflower meadow. Paths lead along the River Foss where you can still see remains of the curtain wall and south gate of York Castle, once the largest and most important castle in northern England.

One nice feature is that as of this writing tickets are valid for an entire year from date of purchase, so you can come back again and again if you wish - and you probably will! You can also get a joint ticket for the Castle Museum and the Yorkshire Museum, which will save you several pounds on separate admission to each museum.

York Castle Museum is immediately east of Clifford's Tower. The tower - all that remains of historic York Castle - is surrounded by a very large pay and display car park. The museum is very well signposted for pedestrians from around the city centre. 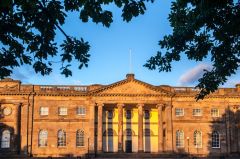 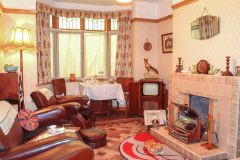 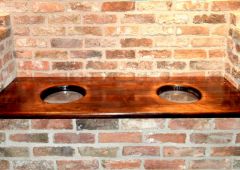 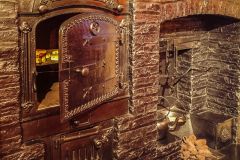 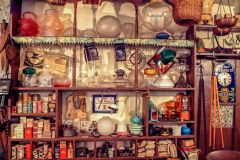 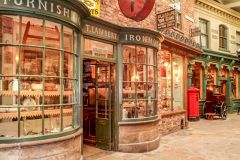 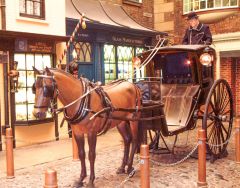 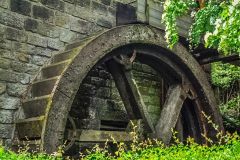 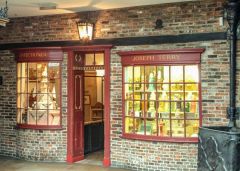 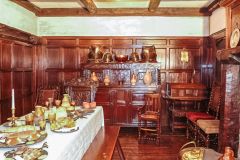