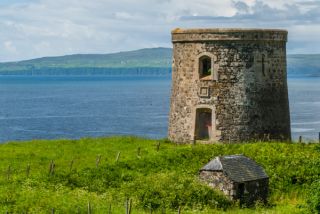 Captain Fraser's Folly stands on a hill south of Uig harbour and offers wonderful views over Uig and west towards the Western Isles. Owned by the Uig Hotel and built in 1860, this little tower has arched windows and arrow-slits. The interior of the Folly is not open to the public.

In 1855 Major William Fraser purchased the Kilmuir estate. About 5 years later he built the tower overlooking Uig harbour on the spot where his tenants traditionally came to pay their rent to the estate's Factor.

Fraser was notorious for his actions in the Highland Clearances when large numbers of tenants were evicted from the estate to make room for more profitable sheep-farming on the land. In 1884 tenants went on a rent strike and Fraser called in the royal navy to help break the strike. His efforts proved in vain, and the military retired. As for the Folly, it became a private house, but the last residents left in the 1950s and it was boarded up.

The Tower is a two-storey, round structure in Romanesque style, with narrow lancets in a cross-shape in place of windows. Though it looks very much like a Norman tower, the folly has no military function and was designed purely for show, and as an indication of Fraser's wealth and status.

Fraser himself lived near the Folly, at Uig Lodge. The Lodge is no longer in existence; it was destroyed by heavy flooding in 1877. 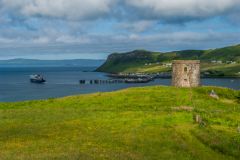 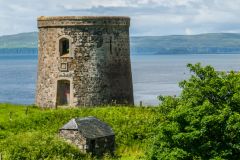 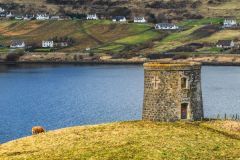 Nearby accommodation is calculated 'as the crow flies' from Captain Fraser's Folly. 'Nearest' may involve a long drive up and down glens or, if you are near the coast, may include a ferry ride! Please check the property map to make sure the location is right for you.