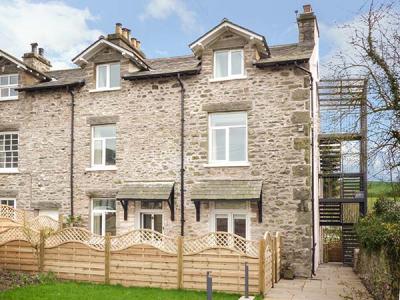 This first floor apartment is one of three in the village of Crooklands, near Milnthorpe and Kendal and sleeps four people in two bedrooms.

Crooklands House 2 is a first floor apartment, one of three, in the village of Crooklands near Milnthorpe and Kendal. The apartment sleeps four people in two bedrooms which are a king-size double and an adult bunk room. There is also a bathroom and an open plan living area with a kitchen, dining area and sitting area with a woodburning stove and a gas stove.

Outside there is a shared lawned garden with patio areas. Off road parking is available for one car and there is secure bike storage. Crooklands House 2 is a superb apartment in a fantastic location.

Disappointed
When we arrived the lady who let us in told me that the Visitors Book had gone missing? I could therefore not put a review in that so I left a review with Sykes which has up to the present time not appeared. She also said that the curtain was off he rail in the main bedroom and if we wished her husband would come and fix it but we did have the full length blinds. My husband put it back on the rail. There were no end stops. Also if we wished to light the log burner she would bring some fuel which I declined. Both of these things should have been sorted out before we arrived. The beds were also very damp. Perhaps it was because of the river? The bathroom smelled strongly of urine although the bathroom was very clean. As the days passed the smell disappeared. I found the lounge suite not fit for purpose as the seating had gone and you were nearly sitting on the floor. The rug in front of the fire was curled up very badly at one end which could have been a trip hazard so I put it to one side. The bread board was tiny. There was no bread bin. There were three egg cups for four people which in our case did not matter. The taps in the bathroom and kitchen were too forceful. The first time that I switched on the sink tap in the bathroom I was wet through. These need slackening off. The people above us had two boys and the noise of jumping and running about from this child/children was shocking. I understand that this is out of the control of the Letting Agents but it became a real nuisance whenever these people were in their flat. .The TV was too small. I know that you do not go on holiday to watch TV but later in the evening after travelling around all day it is nice to relax and watched some telly. On the plus side the apartment was very, very clean and the garden at the front well kept. The parking was very good also.
Jacqueline H
2019-08-21

Too Short a stay
We booked both Crooklands House 2 and Crooklands House 3 for a family vacation and we left wanting to extend our vacation. Set in the countryside but easily accessible Crooklands House is just beautiful from the moment you are welcomed into the stunningly spacious apartment's with their impressive architectural features of the original mill building to the gorgeous rooms. Each apartment occupied an entire floor. At the back of both apartments, you overlook the river and beyond this are lush green fields. There is a seated area here just by the river but don't worry, it is child friendly as there are wooden balustrades which still allow you to enjoy the views of the river and rural countryside beyond. To the front of the property, as we had also rented apartment 3, we enjoyed the courtyard. There is however also a communal lawned area with seating. This was great for a BBQ. The apartments and in fact the whole house, were totally immaculate and very tastefully appointed and supplied with everything one could need. There was a washing machine in both apartments which does take a good load.. very handy for when the little ones have been to the beaches nearby or back from their long walks. There are plenty of kitchen utensils, from a masher to a milk frother as well as pots and pans. The beds in each apartment were very comfortable and the rooms cosily warm. In Crooklands House 2 my two boys slept in the bunk beds provided. These too were very comfortable and as a parent, I can confirm that they are very secure and I had peace of mind that the boys were safe. The bathrooms have a contemporary feel and we were never short of towels or hot water. There is a garage nearby as well as a local village shop but we shopped at the local supermarket which was a 5 min drive so everything is conveniently located. The only downside was that we were only there for 5 nights....it was a really super relaxing and peaceful base for touring the Lakes. My family and I would really really highly recommend staying at any of the apartments at Crooklands House, you wont leave disappointed. As we visit the Lakes annually we have stayed at other venues and locations but this is by far the best... we will be back.
Anon859
2017-04-04

Get an Ordnance Survey map covering the Crooklands area.