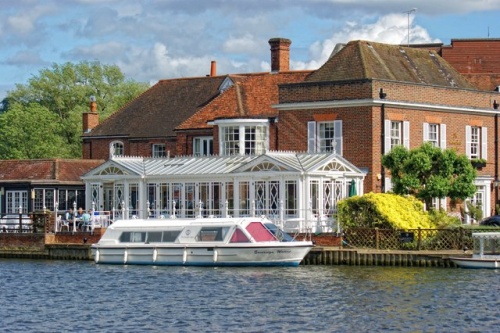 The Compleat Angler in Marlow

Marlow has a reputation as one of the prettiest of many pretty villages scattered along the banks of the River Thames, and the reputation is highly deserved.

Marlow was a market town during the Saxon period and grew in prosperity throughout the Middle Ages, but it was really not until the Georgian period that the town gained some measure of prominence as a fashionable place to settle. Several fine Georgian buildings remain in the High Street and West Street, but the oldest building is the Old Parsonage on St. Peter Street.

This, with the neighbouring Deanery, was part of a 14th-century house. Opposite the Deanery is Marlow Place, an early 18th-century house built for the Earl of Portsmouth. Also on St. Peter Street is the Roman Catholic Church of St.Peter, where a relic said to be the mummified hand of St. Peter is preserved.

Though there was a church in Marlow as early as 1070, the present Church of All Saints is a Victorian creation, built after the spire of the old church collapsed in 1831. The old building was demolished, and a new church constructed of Bath stone, topped by a graceful spire soaring 170 feet above the town. The combination of spire and bridge form one of the most unforgettable Thames sights. 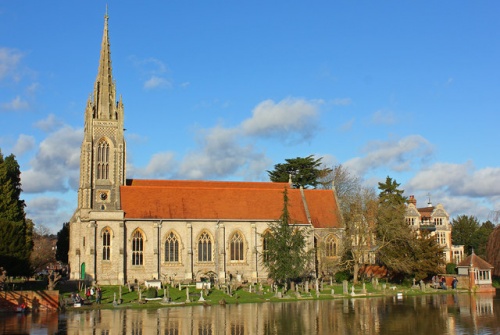 In the church porch is a monument to Sir Miles Hobart, who gained fame by locking the King's Messengers out of the House of Commons during the buildup to the Civil War. Hobart died in 1632 and the monument was erected by Parliament after funds were raised in a public appeal - possibly the first time this approach was used to raise money for a funerary monument.

Hobart was the victim of a coaching accident, and the accident is vividly portrayed in the monument. In the Lady Chapel is another notable memorial, this time to Sir William Willoughby, Sheriff of Buckingham, who died in 1597. Willoughby is shown in gilded armour, surrounded by his wife and three daughters. The black colour on the girls' costumes was added after their deaths.

In the church vestry is a painting of the Spotted Boy, a Caribean slave of unusual black and white colouring, who was bought by Marlow native and showman John Richardson. Richardson, the P.T. Barnum of his day, showed the boy across Britain, but the child died in 1813 at age four. He is buried in the churchyard, in the same grave as Richardson himself.

The delicate lines of the suspension bridge designed by William Tierney Clark in 1832 create a classic Thames picture. Clark was hired for the job after building the Hammersmith Bridge in London, but his design at Marlow was the highlight of his career.

So popular was the bridge, and so much a part of the Marlow scene, that when the structure began to deteriorate in the 1920s it was carefully renewed with steel replacing the original ironwork. Clark himself went on to design the suspension bridge across the Buda and Pest rivers in Budapest, Hungary.

The bridge leads straight onto the broad High Street, and facing it at the top of the street is a large 18th-century building (now shops, which was once a coaching inn used by notorious highwayman Dick Turpin.

The 16th-century Ship Inn in West Street is built with old ship's timbers, but the house occupied by poet Percy Bysshe Shelley and his wife Mary Shelly will draw most visitors. It was during the Shelleys' stay here in 1817-18 that Percy finished Revolt to Islam and Mary finished her horror novel, Frankenstein.

The literary associations on West Street do not end there, however, as poet TS Eliot lived at The Old Post Office House (number 31) from 1918-19. Author Jerome K. Jerome (Three Men in a Boat) also stayed in Marlow, as did Izaak Walton, author of The Compleat Angler.

The Thames Path long distance path wends through Marlow on its way from the origins of the river in Gloucestershire to the far side of London. The path provides easy, mostly level walking opportunities, and passes through some lovely riverside scenery. If you don't want to walk, try a boat! There are regular boat trips on the river to Henley and Windsor, and small boats can be hired.

More self catering near Marlow

More bed and breakfasts near Marlow