"At Brill on the hill, The wind blows shrill ...
from an old nursery rhyme. 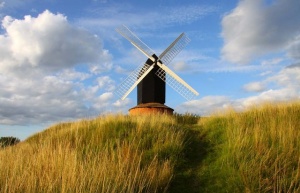 Brill's nickname is "Brill on the hill", and that sums up the village location quite nicely. The most dominant feature of Brill is the 17th-century post mill but in the village itself are several enjoyable Georgian and Tudor buildings.

The mill was built around 1680 and is one of the few remaining post-mills in the country - certainly one of the best preserved. A post mill rotates on a central post so that the entire building can be turned to face the wind. Brill windmill is open to the public on the first Sunday of each month throughout the summer.

The name "Brill" is an odd mix of the Celtic "Bre", meaning "hill", and the Saxon "hyll", meaning "hill" also. So the name Brill can be literally translated as "hill-hill".

There are remnants of an Iron Age hill fort in the village, and evidence of several Roman villas in the area. This latter is not surprising when you consider the Roman road of Akeman Street ran by only 4 miles away on its way from Colchester to St Albans.

In the Anglo-Saxon period, Brill was a royal manor of the kings of Wessex and would have been a place of importance. There was a Saxon castle near the present church as early as 650 AD, and the defences were rebuilt by Edward the Confessor in about 1050.

The castle was abandoned in 1327, but by that time at least 9 kings had stayed there! Today only rudimentary earthworks in the Church Close remain of this once important castle.

Brill was the scene of a battle during the English Civil War. After the Battle of Edgehill in November 1642 a royalist force occupied Brill. Parliamentary troops were sent to oust the royalists, and on January 27th, 1643 the two forces met in the Battle of Brill.

The royalists had thrown up sturdy earthworks, perhaps using remnants of Brill Castle. The Roundheads launched a fierce cannonade but called off the attack after several hours when the Royalists lit damp straw on fire, creating a wall of choking smoke. Remnants of the Royalist defences can be seen in the village.

During the 1830s an abortive attempt was made to turn Brill and neighbouring Dorton into a fashionable spa town, but the scheme collapsed when Queen Victoria preferred Leamington Spa to this fairly isolated corner of Buckinghamshire.

All Saint's Church in Brill began as the chapel of Brill Castle. The chancel and nave date to about 1120 and the tower is from 1420. The church was greatly enlarged during the late Victorian period.

Brill has had a long history of brickmaking, and bricks from Brill were used in the construction of Waddesdon Manor.

More self catering near Brill

The Angel Restaurant with Rooms - 3.8 miles
Aylesbury, Buckinghamshire
Stay from: £70.00

More bed and breakfasts near Brill