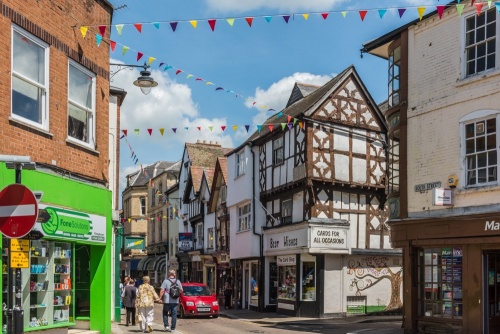 Leominster is a picturesque market town in northern Herefordshire, known for its antique shops and timber-framed buildings. Leominster (pronounced 'Lemster') grew up at the confluence of the river Lugg and the River Kenwater. It has a long history as a centre of the textile trade, and during the Middle Ages the local Ryeland sheep was known as 'Lemster Ore' for the quality of its wool.

The first record of a settlement here dates to the 7th century. The origins of the town's name are unclear. One version suggests that it comes from the Welsh 'lei', or flow (referring to the rivers). Another, less plausible version says that 'Leo' comes from a miraculous event when a Northumbrian priest named Ealfrid visited the court of King Merwald of Mercia. While eating his evening meal a lion appeared. Ealfrid offered the lion the bread in his hand and the lion meekly took it. In both versions, the suffix 'minster' refers to an early Christian church.

We do know that sometime around AD 656 King Merwald established a nunnery here. The nunnery and the town that grew up around it were attacked by British tribes in 777 and again by the Danes in 980. The second attack destroyed the nunnery. Gruffudd ap Llywelyn and his Welsh supporters attacked Leominster in 1052. One of the reasons that Leominster was such a target for attacks was its wealth, a product of the local wool trade. 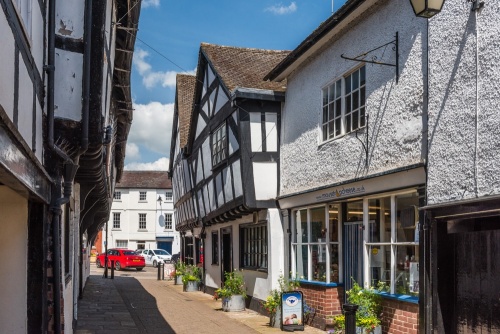 Henry I granted the town to the monks of Reading Abbey, who built a priory at Leominster in 1121. The Welsh attacked again in 1207 and the town, priory and parish church were burned. The same happened in 1402 during Owain Glyndwr's rebellion. More violence followed during the Wars of the Roses later in the same century; the Battle of Mortimer's Cross took place in 1461 just a few miles away near Kingsland.

In 1539 Henry VIII suppressed the priory. In the turmoil following the death of Henry's heir Edward VI a few years later the people of Leominster supported mary Tudor against the claims of Lady Jane Grey. They captured and executed Lady Jane's supporters, for which Mary granted the town a charter when she gained the throne.

Time and religious sentiment changed, however, and just 57 years later in 1610 a Catholic priest named Roger Cadwallader was executed for treason in Leominster.

Leominster was garrisoned by Parliament during the Civil War, though it was recaptured by Royalist troops in 1645. Luckily no lasting damage was done to the town in the conflict. 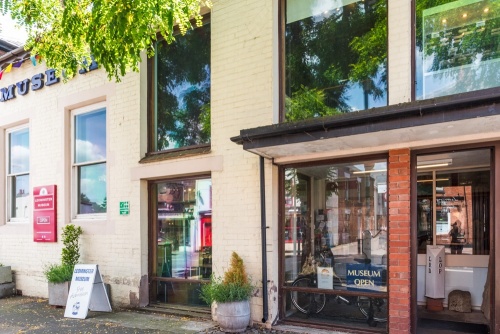 You can follow the rich history of Leominster at the town museum on Etnam Street, opposite School Lane. Here you can find out about the local artist John Scarlett Davis, whose birthplace boasts the only blue plaque in Leominster. See banknotes printed for the Leominster and Herefordshire Bank in the age before only the Bank of England could issue notes.

The museum is housed in a mix of historic buildings including a mission house built for railway workers, a Georgian cider mill, and a 19th-century stable. One of the most intriguing exhibits is the Aymestrey Burial, a Bronze Age skeleton found just a few miles away. 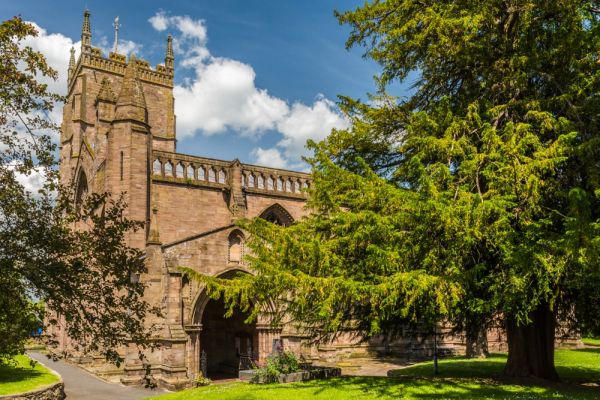 The beautiful parish church of Leominster Priory dates to the 13th century and formed part of the medieval Benedictine monastery. The highlight is a superb west doorway, decorated with a wealth of grotesque carvings including the figure of a Green Man. The carvings were made by the same school of masons responsible for the famous church at Kilpeck.

Another highlight at Leominster Priory is the last ducking stool used in England. The stool is like a seat at the end of a long pole and was used as punishment for miscreants, often for wives whose husbands thought were too talkative.

It was also used to test for witches. A suspected witch was ducked into the water. If she died, she was presumed innocent, but if she survived it was presumed the devil had saved her, therefore she could be killed as a witch. There's an obvious flaw in the logic!

Down the hill behind the church are the remains of the Old Priory, all that remains of the original Benedictine monastery, now incorporated into other buildings. 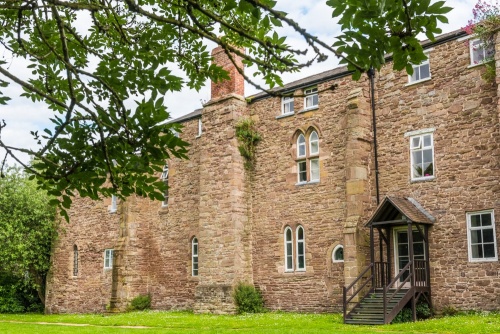 The most iconic building in Leominster is Grange Court, a superb timber-framed building standing at one end of Priory Gardens. Grange Court was built in 1633 by John Abel, a local craftsman who went on to become King's Carpenter to Charles I. It is the last surviving market house built by Abel and is known for its superbly carved decoration.

Human and animal figures adorn the house exterior along with decorative carvings of fruit and foliage with fanciful beasts and heraldic symbols. Grange Court is among the most richly-decorated timber-framed buildings in England. It was built as a market hall but is now used for functions such as weddings though it is normally open to the public outside of events. 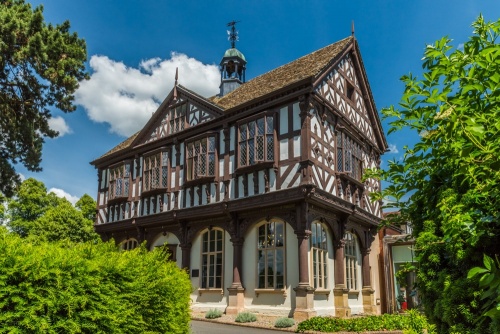 On Church Street is Forbury Chapel, one of Leominster's most historic buildings. It was built in 1282 for Leominster Priory and still boasts its late-medieval hammerbeam roof. It now serves as an event venue as well as being home to the Leominster Team Ministry Office.

Just outside Leominster is the elegant stately home of Berrington Hall, a neo-classical mansion built in 1778 by Thomas Harley, a wealthy merchant. Harley called in architect Henry Holland to design a mansion fit for his status and asked Holland's father-in-law Capability Brown to lay out the surrounding parkland to create sweeping vistas over the surrounding estate. The result is stunning. Berrington Hall was Brown's last major commission. One of his innovations was Berrington Pool, a 14-acre lake built entirely by hand. 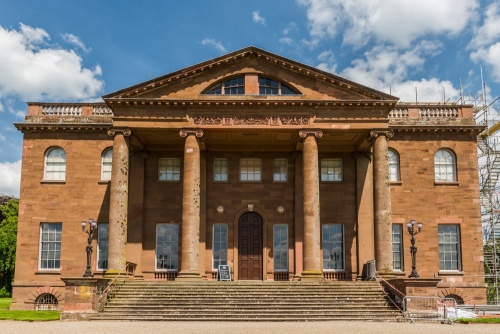 Another nearby stately home is Hampton Court Castle (not to be confused with the Palace of the same name outside London). Hampton Court Castle is a 15th-century fortress later remodelled as an elegant mansion. Surrounding the castle is an outstanding garden incorporating a Victorian walled garden and including picturesque water features, a maze with a Gothic tower in the centre, a sunken garden, and colourful herbaceous borders.

Leominster forms the starting point for a motoring trail taking in some of Herefordshire's most attractive and historic 'black and white' villages and towns, named for their picturesque timber-framed buildings.

The self-guided trail loops 40 miles through beautiful countryside, taking in the villages of Dilwyn, Weobley, Eardisley, Pembridge, and Eardisland as well as the market town of Kington. You can pick up a free Trail leaflet at local businesses or buy a car audio guide from tourist information centres.

Leominster is part of 'Mortimer Country', an area stretching north to Ludlow and east to the Welsh border. The area is named for the powerful Mortimer family, who owned large swathes of the area during the medieval period and beyond. The major Mortimer strongholds were Ludlow Castle and Wigmore Castle, from which the family administered their vast estates like monarchs. 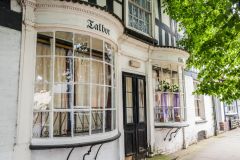 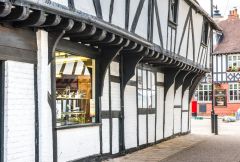 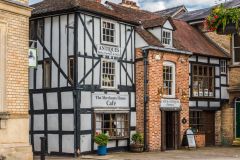 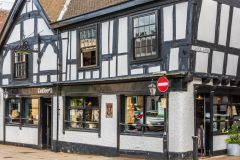 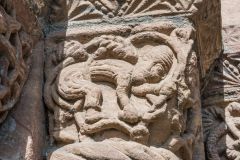 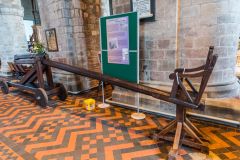 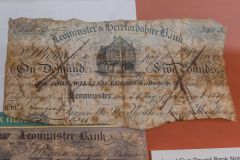 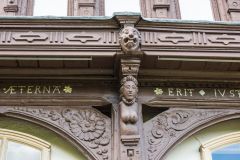 More self catering near Leominster

More bed and breakfasts near Leominster