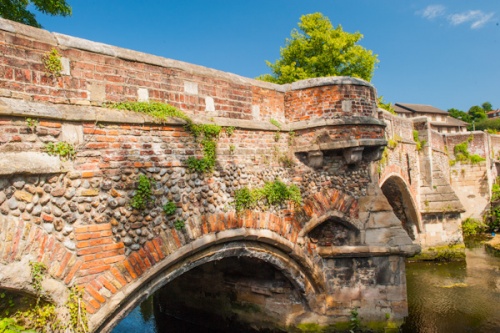 Bishop Bridge spans the River Wensum at the western edge of Norwich's Cathedral Quarter. The bridge was built in 1340, and is still in use, making it one of the oldest active bridges in England. The origins of the bridge go back still earlier, however, to 1275 when the prior of Norwich Cathedral was granted a license by Edward I to build a gate [a fortified gatehouse] with a 20 feet wide bridge attached. 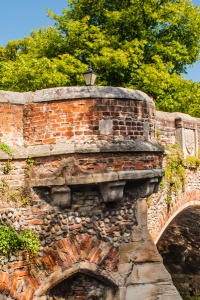 Remains of a
gatehouse turret

It is likely that an even earlier bridge already existed, and the royal license merely allowed the Bishop to protect the bridge with a new gatehouse. The gatehouse was finished in 1343 over the western end of the bridge, and it was paid for by Richard Spynk.

Throughout the medieval period, a gatehouse stood at the western end of the bridge to control access. The gatehouse was a part of the bridge until 1791 when it was torn down. The only remnant is a semi-circular projection on one side of the bridge that formed part of a turret.

The bridge was owned by the monks and they could charge tolls to travellers. The prior was allowed to erect houses on the bridge, but he had to leave a passageway for foot traffic and horses. The priory maintained the bridge until 1393 when it passed to the city of Norwich.

Kett's Rebellion
In 1549 Robert Kett raised a rebellion to protest against the enclosure of common land. Kett and up to 20,000 followers marched on Norwich. Guards on the bridge held out against them at first, then the rebels fired a cannonade at the bridge at the nearby Cow Tower. The top of the tower was damaged - you can still see the marks. The rebels then stormed the bridge and overwhelmed the defenders, making their way up Bishopgate, past the Great Hospital, and into the city itself. 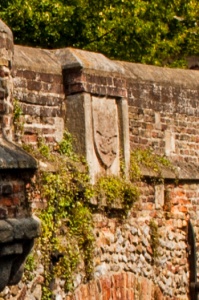 A more peaceful visit occurred in 1578 when Elizabeth I passed across Bishop Bridge on her way to visit the Earl of Surrey (see Surrey House).

During the medieval period, there was an execution and burial ground on the far side of the bridge called Lollard's Pit. Religious heretics such as Thomas Bilney were led across the bridge to the Pit, where they were burned at the stake.

From the western end of the bridge a public footpath leads north to Cow Tower, or south to Pull's Ferry, a picturesque 15th-century building over a 12th-century canal. Or you can follow in the footsteps of Rober Kett and take Bishopgate west to the Great Hospital and on to the Cathedral.