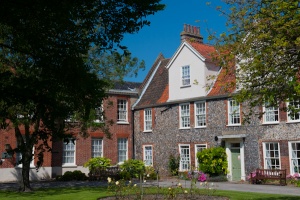 In 1249 Bishop Walter de Suffield (d. 1257) founded a hospital for 30 'poor and decrepit chaplains' and to offer hot meals to winter shelter for 13 paupers.

Bishop de Suffield was a native of Norfolk, known for his generosity to the poor. Unfortunately, he died before his plan for the hospital could be fully realised, but he left detailed instructions in his will of how he wished the hospital to function. He also requested that money be distributed to the poor at every place his body rested on its way to burial. He was buried in the cathedral, and miracles were subsequently reported at his tomb.

Suffield's foundation was called St Giles Hospital until it was dissolved by Henry VIII in the Reformation. Henry's son, Edward VI, re-founded the hospital and gave it to the city of Norwich.

The hospital complex is set around a cloister, just like a monastic community, with the church of St Helen's at the south entrance to the site. This is, without doubt, one of the smallest monastic cloisters in England. Among the buildings grouped around the cloister green are a medieval Refectory, an 18th century Swan Pit, a Victorian Hall, and St Helen's House, which has very nicely decorated Georgian ceilings. 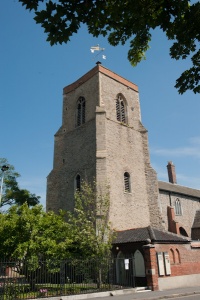 The original parish church of St Helen's was across Bishopgate, but in the 1270s a nave was inserted for the local population, with the hospital chancel and infirmary on one side. The chancel ceiling is painted with eagle symbols to commemorate the visit in 1383 of Anne of Bohemia, Richard II's queen, and it was known thereafter as the Eagle Ward.

The chancel and infirmary were separated from the nave during the 16th century to provide 2 separate wards, and the Eagle Ward was eventually closed in 1979, though the cubicles are maintained as they would have appeared in the 1950s.

The Great Hospital is still a functioning residential care home, so opportunities to explore the historic range of buildings is naturally limited. There is an exhibition on the history of the site in The Lodge, at the Bishopgate entrance to the site, and this is open every Friday morning (as of this writing).

There are also regular heritage open days throughout the year. St Helen's church is ostensibly open daily, however, it was closed on the two occasions we tried to visit - perhaps you'll have more luck!

If you walk east along Bishopgate (away from the Cathedral) you will come to Bishop Bridge. It was by this route that Robert Kett entered Norwich in 1549 on his ill-fated rebellion against land enclosure. 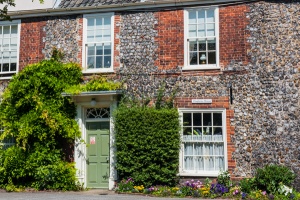 Nearest Accommodation to The Great Hospital:

More self catering near The Great Hospital

More Hotels near The Great Hospital

More bed and breakfasts near The Great Hospital