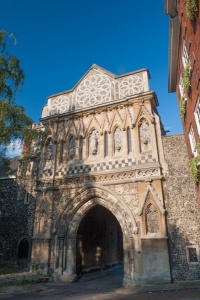 Medieval fairs could be quite raucous events; just look what happened in Norwich in 1272. Just outside the cathedral close was an area known as Tombland, from the Old English for 'empty space'. Tombland was the main market area of Norwich before the Normans established a new market near their imposing castle.

Tombland was also the site of a popular annual fair. Such events often led to tensions between the monks of Norwich Priory who administered the cathedral quarter, and the townsfolk.

In 1272 however, things got a little heated. A disagreement between the monks and townsfolk got out of hand, and several citizens were killed by monks. The secular justice system issued warrants for the murderous monks, but the monks argued that as clerics they had to answer only to their own justice system, not to city laws. The monks locked the gates to the cathedral close and had their men attack passers-by. 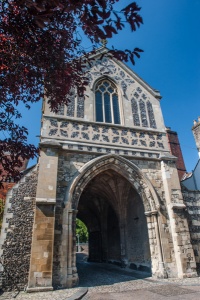 Their hired help took things a little too far, however, and went out into the city on a rampage of violence. The citizens, not unnaturally, retaliated, burned the cathedral, the Close, and the nearby church of St Ethelbert, and looted the priory. Several of the priory hirelings were killed, so the prior hired more from Great Yarmouth. Finally King Henry III had to intervene.

It says a lot about the status of the church and the hierarchy of 13th-century society that Henry sided with the monks. He fined the city and executed 30 of the ringleaders of the citizen violence. 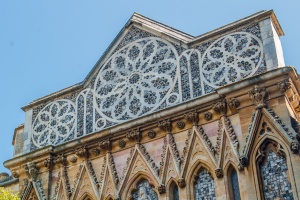 The new gate and chapel were not complete until about 1325, some 50 years after the destruction of the church.

It was worth the wait.

The result is one of the best examples of early medieval flint flushwork in England, with decorative panels of knapped flint separated by dressed freestone. While flint was readily available locally, the more expensive freestone had to be imported from great distances.

The flushwork panels use geometric designs, probably the first time in England this artistic technique was used in flint. The design is less dramatic on the inner face (the cathedral side) suggesting that the designers wanted to emphasise the facade facing onto Tombland and the city.

Aside from the geometric flushwork, what really catches your eye on the Tombland face of the gate are the intricte carvings in the spandrels over the arch. Much of this is a 20th century restoration, but it does give a good idea of what the gate might have looked like in the medieval period.

One one side is a figure armed with a long sword, on the other what appears to be a dragon, or serpent. Who is is the armed figure? Not Ethelbert, for there is nothing in the mytholgy of the 'boy king' to suggest a combat with a dragon. Perhaps it is, rather, a warning from the monks to the townsfolk? 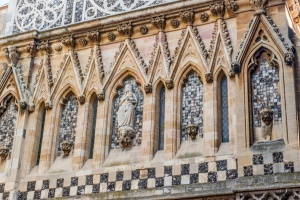 Above both figures are twisting vines and foliage, while under the figures are a peculiar mix of odd beasts, including a basilisk and a lion. The carving is exquisitely detailed and seems like it is ready to leap off the gateway.

As you pass through the gate, pause in the centre and look up; the ceiling is decoarated with beautiful lierne vaulting, with richly decorated bosses. The central boss is a Green Man, with vines issuing from his mouth.

It is interesting to compare the Ethelbert Gate with the 'other' Tombland entrance to the cathedral close, the Erpingham Gate, built just a century later. 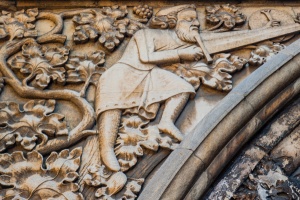 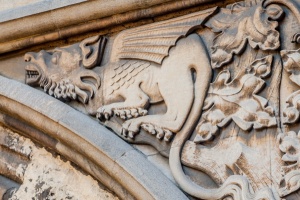 Dragon figure in the spandrel 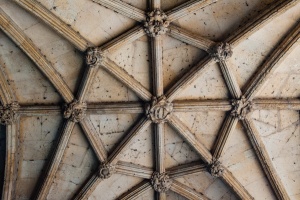 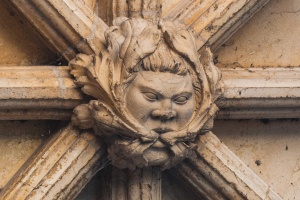 Nearest Accommodation to The Ethelbert Gate:

More self catering near The Ethelbert Gate

More Hotels near The Ethelbert Gate

More bed and breakfasts near The Ethelbert Gate