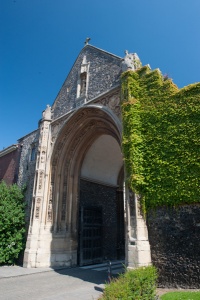 There are two main gates giving access to Norwich Cathedral Close from Tombland. The southernmost gate is the 13th-century Ethelbert Gate, erected by the citizens of Norwich as a penalty for burning the earlier church of St Ethelbert during a violent dispute with the monks of the cathedral in 1272. The second and most northerly gate is this, the Erpingham Gate, erected directly opposite the west front of the cathedral around 1420.

The gate was built to form a unified decorative scheme with the imposing west front of the cathedral. It consists of a single tall, slender arch, supported by stone vaulting. On the outer facade (facing Tombland) the gable above the arch is decorated with flintwork, with a central statue niche.

Inside the niche is a kneeling figure of Sir Thomas Erpingham, the man who gave the gate to the city. The archway is heavily carved with figures of saints; 12 female saints on the outer moulding and 12 male saints on the inner. 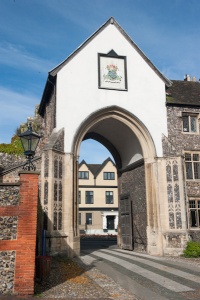 Who was Sir Thomas Erpingham?

One of the most powerful men in late 14th and early 15th century Norwich - and indeed in all of England - Thomas Erpingham was born in 1357 and over the course of a tumultuous life he had a hand in most of the important historical events of the time. He was a household retainer in the service of John of Gaunt, Duke of Lancaster, and helped re-establish order in Norfolk following the upheavals of the 1381 Peasant's Revolt. He fought for Richard II against the Scots, and for Gaunt in Castile and Leon. He then aligned himself with Gaunt's son, Henry Bolingbroke, and followed Bolingbroke abroad when Richard II exiled him.

In 1399 Bolingbroke returned, to make an ultimately successful bid for the throne. Erpingham not only fought with his lord, he commanded an ambush that seized Richard, and had the honour of guarding the deposed king in the Tower of London. When Bolingbroke took the throne as Henry IV, Erpingham became his chamberlain, and gained lands in Norfolk and Suffolk, as well as becoming constable of Dover Castle and Warden of the Cinque Ports. He used his position at court to promote the interests of Norwich, prompting Henry to award a royal charter to the city in 1404. When Henry died, his son dismissed most of his father's counsellors, but he not only kept Erpingham, he named him his royal steward. 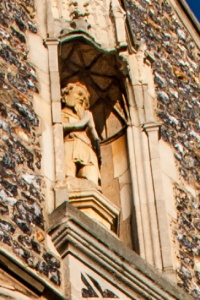 The Archers of Agincourt

But it is not as Henry V's steward that Erpingham is remembered, but as the commander of Henry's archers at the Battle of Agincourt in 1415. It was Erpingham who gave the order to his archers to fire at the pivotal moment, and fire they did, overwhelming a vastly superior force of French mounted soldiers. His role was remembered, even eulogised, by Shakepeare, who called him a 'good old knight' in his play Henry V. And he was indeed old by the time of Agincourt.

Erpingham must have been conscious of his mortality, and determined to leave a legacy behind. He left large amounts of money for the poor in his will, but he left behind something even more tangible; a great gateway into the cathedral close in his beloved Norwich. Perhaps it was an act of gratitude for surviving Agincourt. Another version suggests he built the gate as atonement for a sin, perhaps a murder, or support for heretical ideas.

Just as likely is that he hoped to be buried inside the cathedral and the gate was an elaborate bribe. If so, it worked, for when Erpingham died in 1428 he was buried in the cathedral in a pre-made tomb showing him beside his two wives. A chantry was established so that monks could say prayers for his soul. 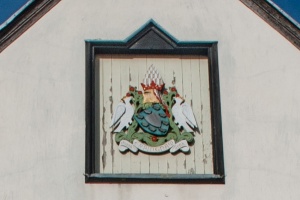 We do not know exactly when the gate was built. The date most commonly suggested is sometime between 1420 and 1435. Though it was not called The Erpingham Gate until the 18th century, the Erpingham arms are in the gateway, as are the arms of Sir Thomas's first and second wives.

As for the figure of Sir Thomas over the arch, that was not inserted until the late 17th century, which seems rather curious to say the least. One theory is that the statue was moved here from Sir Thomas's tomb inside the cathedral.

Another curiosity is the word 'Yenk' carved above the gate. This has been interpreted in several ways. Perhaps it means 'think'; a reminder to visitors to the close to remember Sir Thomas. Or perhaps it means 'Thank', and is a reminder of Sir Thomas's gratitude for surviving the French conflict. We simply don't know.

Immediately to your left on passing through the gate into the cathedral close (that is, standing facing the west front of the cathedral) is the early 14th century Chapel of St John the Evangelist, built by by Bishop Salmon atop an earlier charnel house. 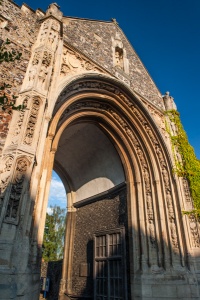 The gateway arch
from Tombland 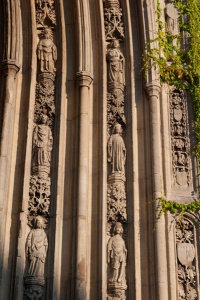 Figures of saints on
the arch moulding 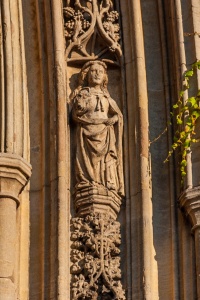 Carving detail on the
outer moulding of the arch 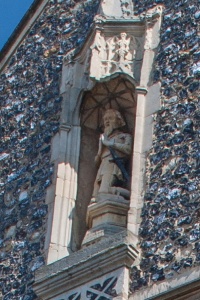 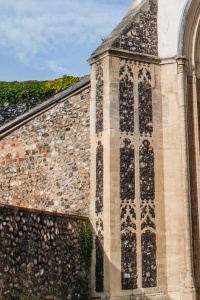 More self catering near Erpingham Gate